Imagine having a portfolio of stocks that consistently paid dividend yields of more than 5%. That kind of return trounces what most bonds are paying now. And a 5% or greater yield represents over half of the average long-term total return of the S&P 500.

The good news is that you don't have to use your imagination. There are quite a few stocks that you can buy right now with dividends yielding more than 5%. Here's why Health Care Property Investors (NYSE:PEAK), AT&T (NYSE:T), W. P. Carey (NYSE:WPC), Seagate Technology (NASDAQ:STX), and Omega Healthcare Investors (NYSE:OHI) especially stand out. 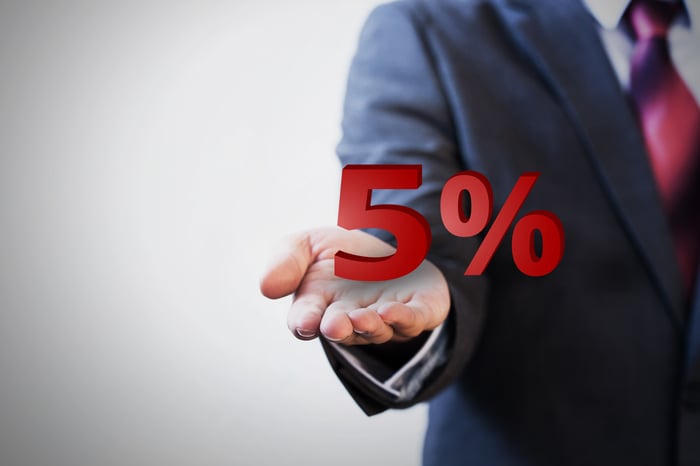 As you might guess from its name, Health Care Property Investors (HCP) is a real estate investment trust (REIT) focused on healthcare. The company focuses primarily on senior housing, but also owns medical offices and life-sciences buildings.

HCP's dividend currently yields 5.13%. Although the company uses over 130% of its earnings right now to fund its dividend, HCP's solid cash flow should allow it to keep the dividends flowing at least at current levels.

Future growth appears likely for HCP for a couple of reasons. First, the aging of baby boomers should create higher demand for senior housing. Second, HCP is well positioned to acquire additional properties.

AT&T is a pioneer in the telecommunications industry and continues to rank among the largest telecom companies in the world. The company makes money primarily from providing wireless and internet solutions to businesses and individual consumers, as well as providing video entertainment through its DIRECTV satellite television services.

Many investors are understandably attracted to A&T's dividend, which currently yields 5.24%. The company also claims an impressive track record of 33 consecutive years of dividend increases. Despite a relatively high payout ratio above 90%, AT&T should be able to keep its streak alive due to its strong cash flow.

Although the telecom industry is highly competitive, AT&T's initiative to build out a 5G network should allow the company to retain a leadership position. In addition, the company hopes to finalize its pending acquisition of Time Warner, a move that will open up new possibilities for growth in providing video content to subscribers.

Like HCP, W. P. Carey is a REIT. However, W. P. Carey's focus is on industrial, office, retail, and warehouse properties. The company owns 900 properties, with roughly two-thirds of them in the U.S.

W. P. Carey's dividend currently yields 5.96%. But should investors be concerned about the company's payout ratio of 144%? I don't think so. W. P. Carey's cash flow is solid. It's also dependable, with most of its tenants signing long-term leases -- and none of those tenants represents more than 5% of W. P. Carey's total revenue.

There are at least a couple of paths for W. P. Carey to grow revenue and earnings in the future. Further acquisitions are likely for the company. Also, most of the company's leases have contractual rent increases that will generate more money for the company over the duration of the leases.

Seagate Technology stands out as one of the largest hard-drive manufacturers in the world. The company also makes other data-storage products, including solid state drives and their related controllers, solid state hybrid drives, and storage subsystems.

With a dividend yield of 8.03%, Seagate claims one of the most appealing dividends among tech stocks -- and among stocks of any industry, for that matter. Like some of the others on our list, though, Seagate's payout ratio of nearly 98% is high. However, also like those other companies, Seagate claims a solid cash flow. The company has also increased its dividend for six years in a row -- underscoring Seagate's commitment to its dividend program.

Seagate's stock has fallen recently, largely as a result of the company's disappointing fourth-quarter results. However, long-term demand for data storage should grow, presenting significant opportunities for Seagate and others in the industry.

Our list started with a healthcare REIT -- and it's ending with one. Omega Healthcare Investors focuses on long-term care (LTC) nursing homes, assisted living facilities, and rehabilitation hospitals. The company owns 999 properties in the U.S. and the U.K.

As is the case with HCP, Omega Healthcare Investors stands to reap the benefits of the aging of the baby boomer generation. Look for the company to keep adding to its list of properties in coming years to take advantage of higher demand, particularly in the assisted living facility market.