Like a hungry diner eyeing a Big Mac, McDonald's (NYSE:MCD) is about to take a big bite of the Chinese market. The company announced that it and its partners aim to open restaurants at a rapid pace in the country over the next five years.

And why not? McDonald's doing very well these days, and now it's officially collaborating with a pair of well-capitalized partners that will presumably shoulder much of the financial burden. Now is a very good time for expansion.

McDonald's partners in its China (and Hong Kong) operations are financial services multinational Carlyle Group (NASDAQ:CG) and state-supported financial conglomerate CITIC. Earlier this year, the Golden Arches struck a deal to effectively sell 90% of its China/Hong Kong business to the duo in a cash and stock deal worth up to $2.08 billion. 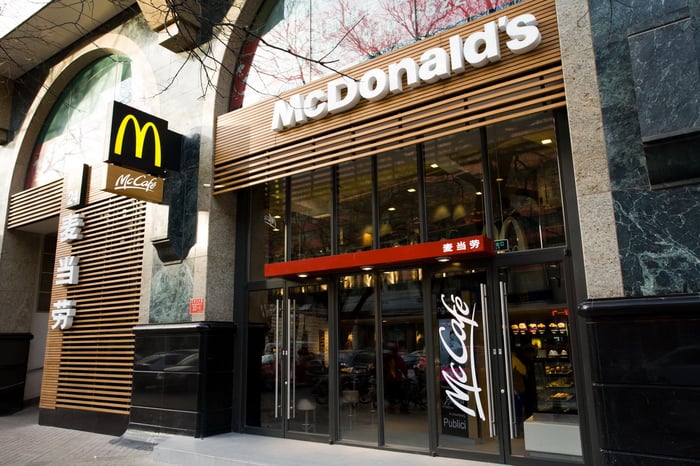 The deal, which closed at the end of July, puts 52% of the venture in CITIC's hands, with Carlyle holding 28%. McDonald's retains the remainder. All told, the partnership covers around 2,500 restaurants in mainland China and 240 in Hong Kong.

The former number will rise to 4,500 over the next five years if the venture's grandly named "Vision 2022" strategy is realized, doubling the pace of development from the current 250 restaurant openings per year to 500. The addition of 2,000 restaurants is higher than McDonald's previously announced plan to build out 1,500 across the country and in Hong Kong.

Additionally, the consortium intends to have 75% of its outlets covered by delivery services, and nine out of 10 operate as "experience of the future" restaurants (i.e., ones enhanced with tech such as table location functionality to get food to diners quickly and efficiently and touchscreen kiosks for faster ordering).

"China will soon become our largest market outside of the United States," McDonald's CEO Steve Easterbrook said in remarks quoted by Reuters. "We are excited to join forces with CITIC and Carlyle for better localized decision-making to meet changing customer demands in this dynamic market."

The new strategy is broadly in line with McDonald's efforts to reposition itself in relation to its restaurants. At the moment, around 86% of McDonald's worldwide operate as franchises, with the company directly owning and managing the rest. It aims to disentangle itself from many of the latter, tilting the ratio of franchisees to 95% of its restaurant total by the end of 2018.

That sacrifices overall revenue, to the advantage of profitability. Although the company's top line continues to slide, net profit rose by nearly 30% in its most recently reported quarter. That lifted the net margin to 23%, notably above the 17% in the same period the previous year.

More encouragingly, excellent growth in comparable sales of nearly 7% proves that McDonald's has done a bang-up job of bringing customers into its restaurants. This is particularly impressive given the recent slump in the restaurant industry lately and the shift in consumer taste toward healthier foods.

It's telling that in the press release heralding the consortium's new strategy, it made sure to point out that the refranchising push will include over 1,750 stores it directly owns in China and Hong Kong. That shift is clearly paying off in the U.S.; there's little reason to believe it wouldn't work across the Pacific.

As the junior-yet-still-critical partner in the China consortium, McDonald's looks well positioned to benefit from teaming up with CITIC and Carlyle to implement this obviously viable strategy. The American company can reap its rewards while standing on the shoulders of wealthy partners that share its ambitions -- and have the resources to turn them into reality.