For nearly half a century, Altria (NYSE:MO) has delivered a steadily rising stream of income to its shareholders. In fact, the tobacco titan has increased its dividend 50 times in the past 47 years, earning long-term investors a fortune along the way.

On that note, here are the three reasons Altria's stock could fall in the years ahead. 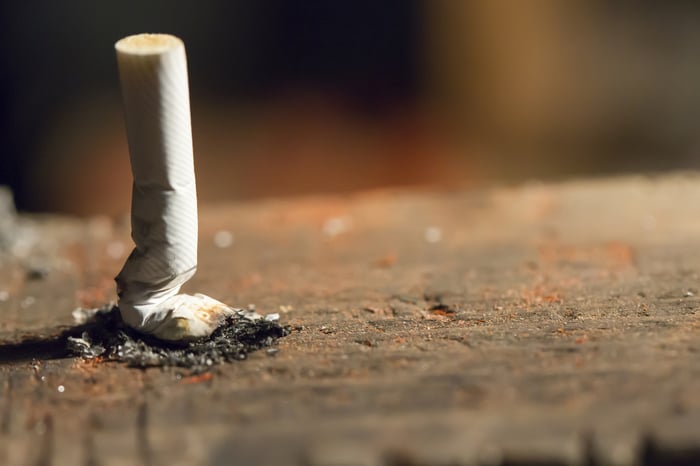 Between 1965 and 2015, adult smoking rates in the U.S. plunged from 42% to 15%, according to the Centers for Disease Control and Prevention (CDC). This secular decline in smoking shows no signs of abating, with the tobacco industry likely to remain under pressure from regulators and anti-smoking activists, as well as the general trend toward healthier living.

This declining-demand environment presents significant challenges. For one, Altria must rely on price increases to drive revenue growth. But there's a limit to what even the most hardcore smokers can pay. Pushed too far, this strategy could actually reduce revenue by destroying demand.

Moreover, Altria has relied on cost cuts to drive a substantial portion of its profit growth. But like price increases, slashing expenses can only go so far. Eventually, there's nothing left to cut, at least not without crippling the company's ability to operate effectively.

So far, Altria has been able to largely overcome these obstacles. But investors should remain cognizant of the fact that fewer people are buying Altria's core tobacco products every year. At some point, Altria will no longer be able to overcome falling sales volumes with price increases and cost cuts, and investors will need to become accustomed to reduced earnings and dividend growth.

With many states struggling with funding shortages, taxing authorities are increasingly looking toward the tobacco industry to help fill the gaps. These taxes also serve the additional purpose of discouraging people from smoking by raising the price of cigarettes.

In a particularly hard blow to the tobacco industry, California recently voted to raise excise taxes on cigarettes to $2.87 per pack, up from $0.87. The state previously accounted for roughly 7% of total U.S. cigarette industry volume, which fell to 5% after the tax increase. That led to a 4.5% decline in total U.S. industry cigarette volumes in the second quarter.

With 22 other states considering excise tax raises on cigarettes this year, this issue is likely to be a persistent threat to Altria and its peers.

In addition to tax hikes, new regulations could also pressure Altria's sales. The U.S. Food and Drug Administration recently announced a proposal to reduce the amount of nicotine in cigarettes to below levels thought to cause addiction. The FDA believes that such a move could save millions of lives over time.

While the FDA's proposal isn't a regulation yet -- proposals of this sort allow time for public discussion before official action is taken -- Altria's shares got hit on the news nonetheless. The reason is simple: If the FDA does ultimately act to limit the amount of nicotine in cigarettes and Altria's core product loses its addictive qualities, it's likely that many more smokers will quit smoking. That could put a serious dent in the tobacco giant's sales and profits.

The FDA's proposal also highlights what is perhaps the greatest risk of all to an investment in Altria, or any cigarette company for that matter: Multiple forces stand in direct opposition to its success. Anti-smoking groups, politicians, regulators, and numerous other organizations have all taken steps to limit the tobacco industry's growth, and they're likely to continue to do so for the foreseeable future. Even many of Altria's own customers -- including its share of the nearly 70% of U.S. smokers who say they would like to quit smoking -- are in a sense rooting against the company, and could quickly abandon its products if they suddenly became less addictive.

It's difficult to win when so much of the world wants to see you fail. And for Altria, this opposition is likely to become even more challenging in the years ahead.