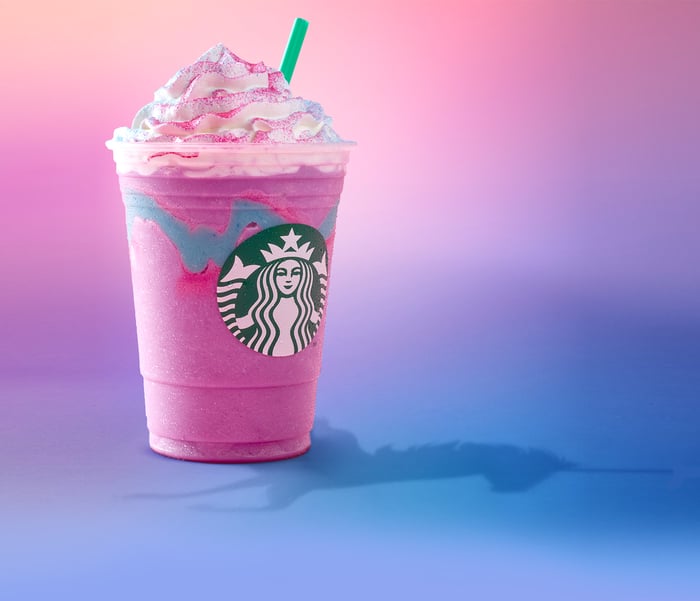 Starbucks tries to be creative in all its markets. Image source: Starbucks.

While much of the world enjoys Starbucks (NASDAQ:SBUX) favorites that appear on menus in the United States, the chain also has an array of market-specific offerings.

Some of these food items may eventually make it to the U.S., but others would be bit out of place domestically. As a company with more than 25,000 stores in 75 countries, Starbucks faces an interesting challenge. It must balance its global menu with items that cater to local tastes.

These are all real items that the coffee chain currently sells in one of its many territories. Many may seem exotic by American standards, but they're quite common in their local markets. Of course, a few of the choices are a bit out there, but that's to be expected from the company that created the Unicorn Frappuccino. 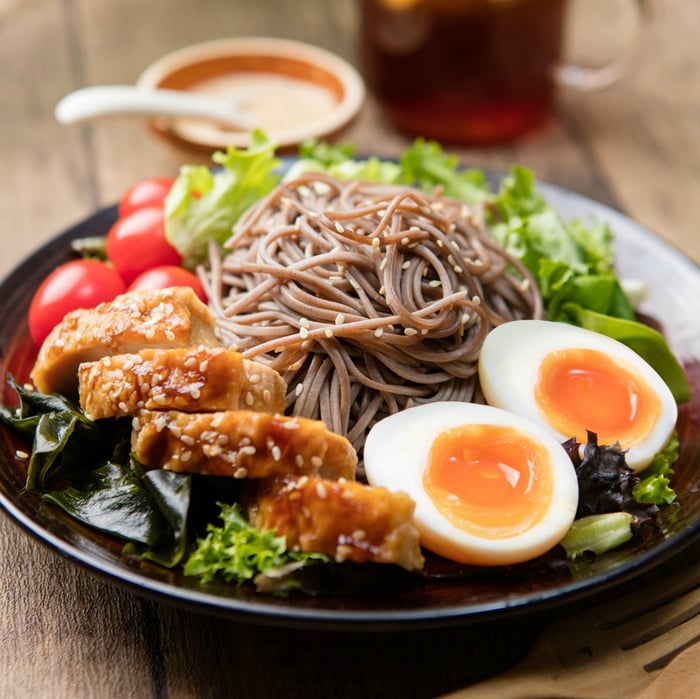 Soba noodles are the highlight of this unique salad. Image source: Starbucks.

Americans may know soba noodles from Japanese restaurants, where they tend to be served in soup or stir-fry dishes. The buckwheat noodle is instead being used here in a cold salad. The dish includes strips of chicken, a boiled egg, shiitake mushroom, carrot pieces, and julienned onion leeks on a bed of assorted greens. Starbucks then lightly tops it with black sesame soy dressing. 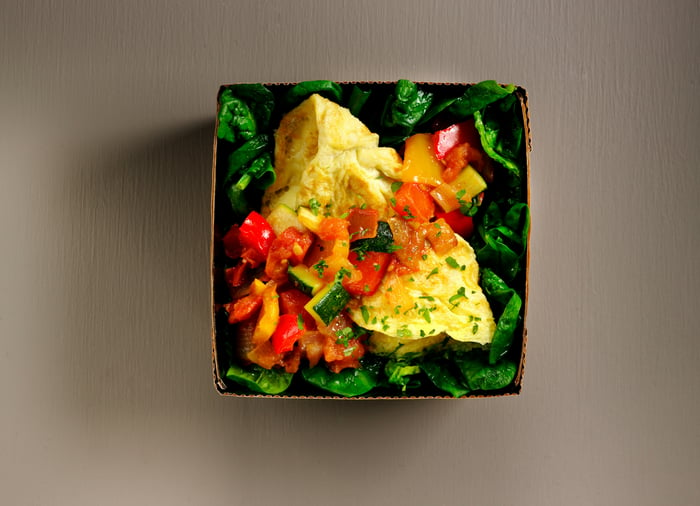 France gets a market-specific take on an omelette. Image source: Starbucks.

While croissants, a French staple, are on Starbucks menus in the U.S., Americans may be less familiar with the Omelette Facon Piperade. in reality, it's just an omelette made with free-range eggs, accompanied by spinach and a mixture of grilled vegetables cooked in piperade (onion, green pepper, and tomatoes sauteed and flavored with Espelette pepper). 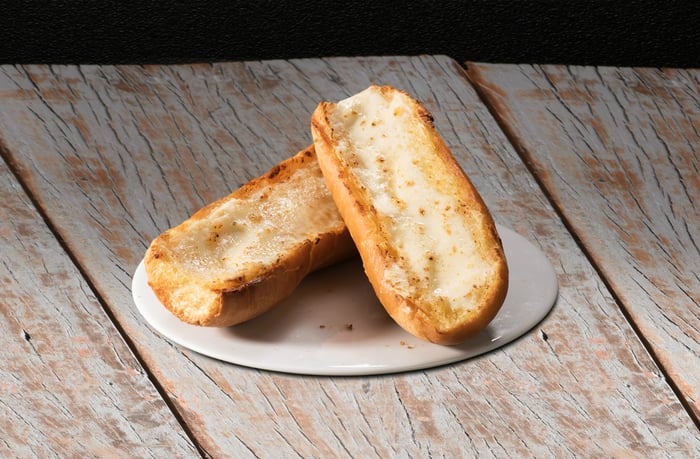 A Pao is basically a take on toast with jelly. Image source: Starbucks.

Americans would call this toast. The Pao Na Chapa is lightly toasted bread (close to a baguette) served with Catupiry, a creamy cheese that's popular in Brazil. 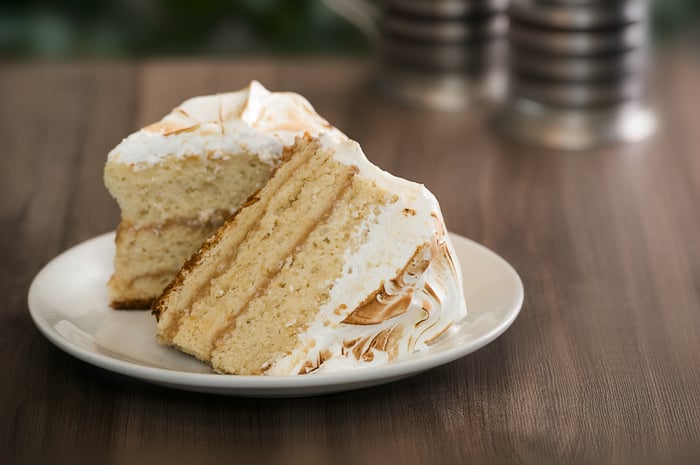 Leche is the Spanish world for milk, and this cake is not for the lactose intolerant. Starbucks makes the Torta 4 Leches with sponge cake, cream, condensed milk, evaporated milk, and whole milk. It is then "stuffed with manjar, a type of caramel similar to dulce de leche, and covered with meringue," according to a press release. 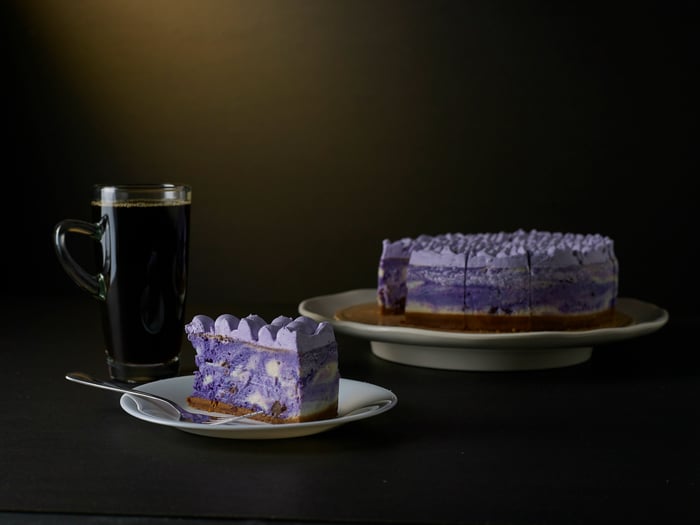 The purple of the yam really comes through. Image source: Starbucks.

Yam may not be the first thing that comes to mind when you think of cheesecake, but it may not even be the weirdest item in this piece of cake as described by Starbucks: "A silken smooth, light cheesecake swirled with purple yam, red mung bean, and macapuno coconut," wrote the company, which at least refrained from calling it Mung Bean Cheesecake. 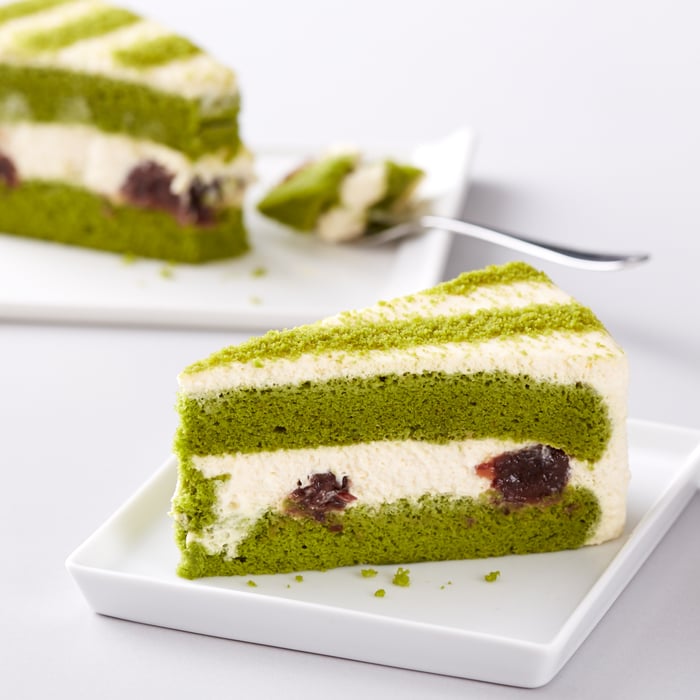 Another country, another bean cake for Starbucks Image source: Starbucks.

Apparently, beans are not as rare a cake ingredient around the world as you might think. This one uses two layers of sponge cake made with green tea, mascarpone cream cheese, and red bean paste. 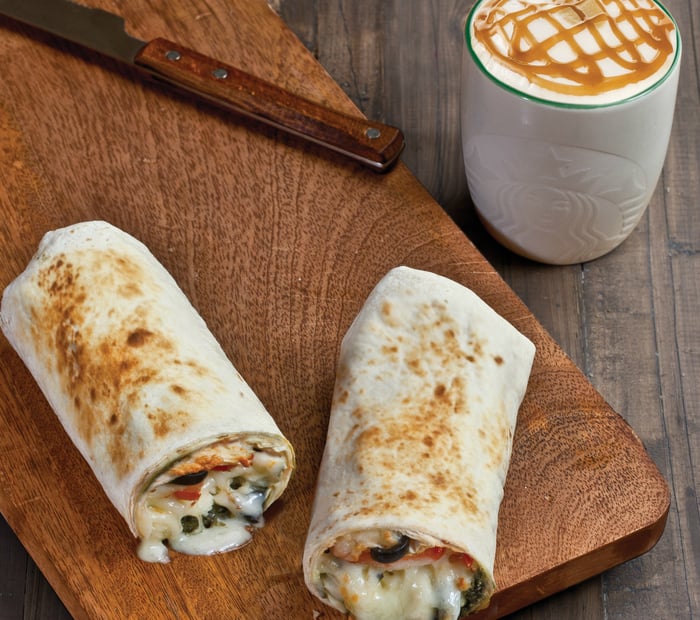 This wrap contains ingredients many Americans may be unfamiliar with. Image source: Starbucks.

The key ingredients in this tortilla wrap are halloumi, "an unripened, brined cheese similar to mozzarella and kashkawane, made with cow and sheep milk," according to Starbucks. The sandwich is then dressed with mayonnaise and "accompanied by tomato, sliced black olives, and zaatar, a Middle Eastern spice mix." 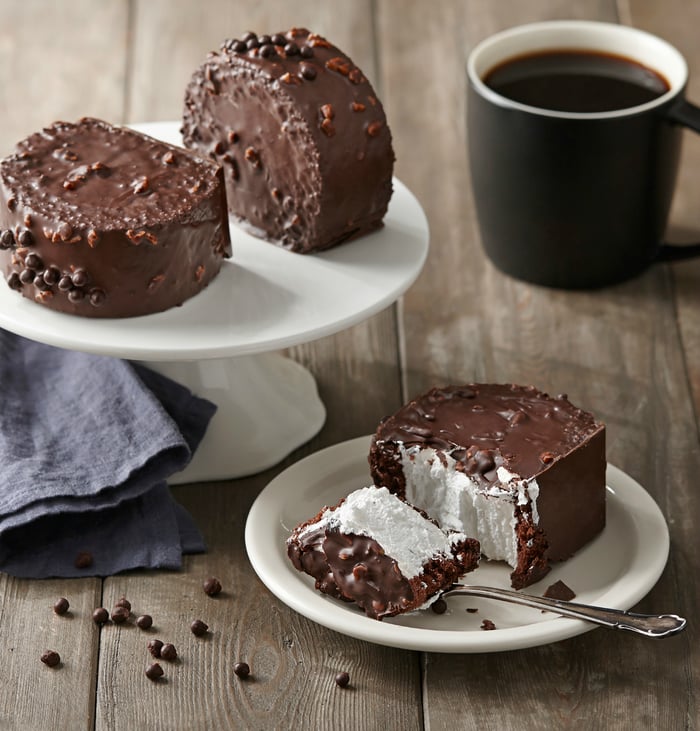 While it's for South Korea, the Chocolate Crunchy Roll would probably work on any Starbucks menu. Image source: Starbucks.

This is a pretty simple but elegant dessert. Starbucks creates a "moist chocolate sponge roll cake with fresh cream and mascarpone cream cheese," and then coats it with hazelnut, chocolate crunch, and dark chocolate. 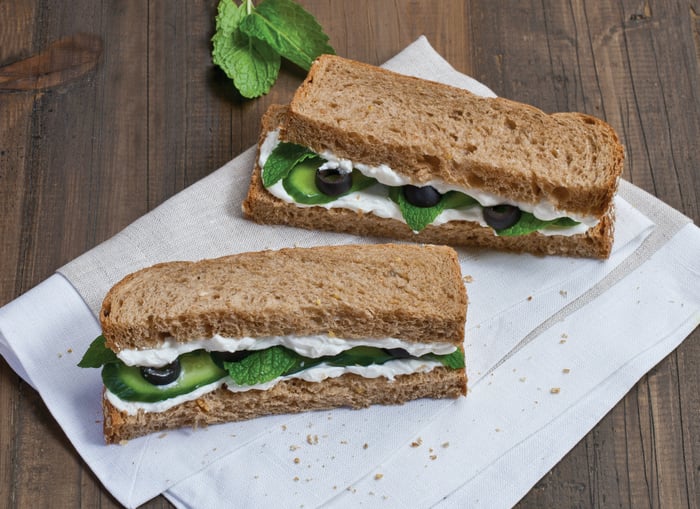 This sandwich, being sold in the Middle East, uses a cheese made from yogurt. Image source: Starbucks.

Labneh, a soft cheese made from strained yogurt, is spread on on two slices of bread that is then layered with cucumbers and black olives and garnished with fresh mint leaves. That's certainly not a turkey with Swiss, but it uses flavors familiar to the Middle East region where it's sold. 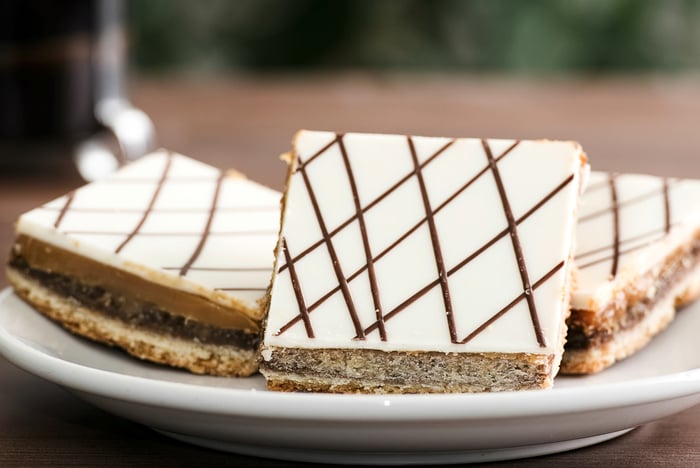 The Barrita Nuez is a stuffed cookie. Image source: Starbucks.

While the humble cookie is known all around the world, Starbucks made one with a Chilean spin. This one is stuffed with walnuts, nougat, and dulce de leche. These dumplings are a sweet treat. Image source: Starbucks.

"Dragon boat races and the tradition of giving dumplings have been a part of China's annual Dragon Boat Festival for more than 2,000 years," according to Starbucks. These Dragon Dumplings pay honor to that tradition by offering a twist on dumplings, offering sweet rather than savory fillings. These are made of shaved ice mixed with coffee, tea, and fruit flavors. Flavors include Strawberry & Cream, Earl Grey Jelly, Mango, Green Tea & Red Bean, and Coffee Almond, wrote the company. 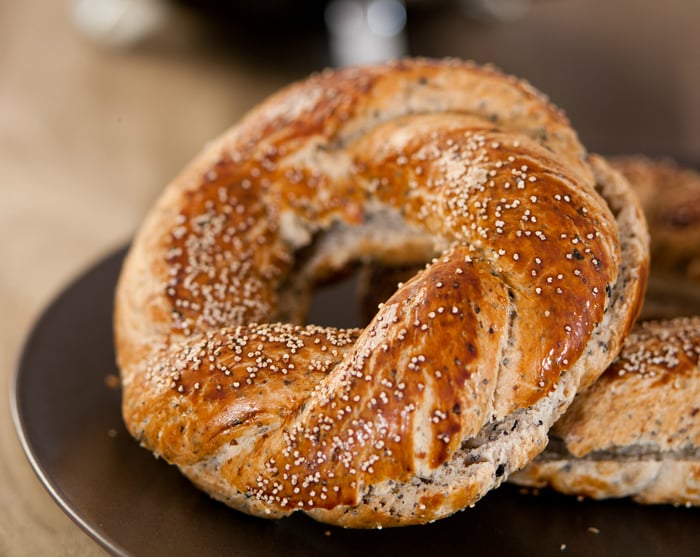 A variant on a bagel, the Cheese Savoury is being sold in Turkey. Image source: Starbucks.

It's a bagel, albeit not the traditional kind you find in a New York bakery. The Cheese Savoury combines poppy seeds, olives, walnuts, and cream cheese into a crusty bagel. 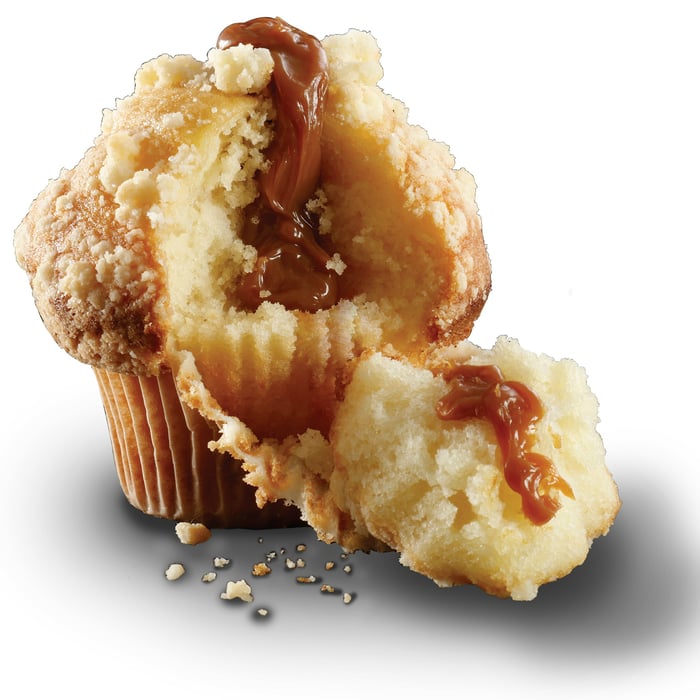 It's easy to picture this muffin being solf anywhere in the world. Image source: Starbucks.

It seems that the concept of taking what is essentially a cupcake and calling it a muffin is not unique to the United States. This muffin uses a vanilla base and combines it with a dulce de leche core and a crunchy crumble topping.