Today's matchup features two companies that are considered disruptive innovators with a focus on smart tech and high tech products. While iRobot (NASDAQ:IRBT) and 3D Systems (NYSE:DDD) have similar business models and financial strategies, the paths their stocks have taken in the past year could not have been more divergent. However, as investors, we are obviously much more interested in where a stock is going than where it has been. Today, we'll take a look through a value investor's lens to determine which stock is a better buy today. 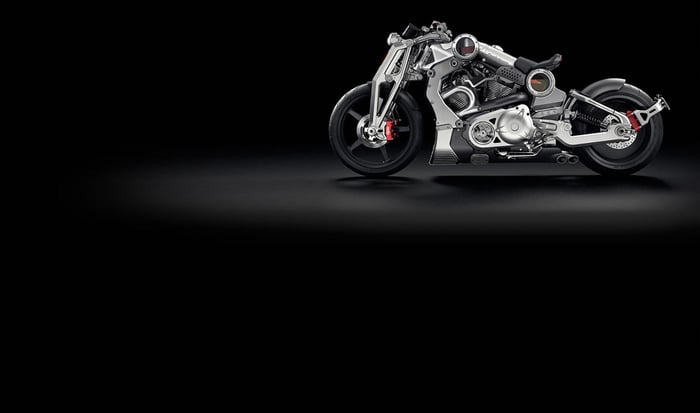 I would ignore the negative PE listed for 3D Systems. 3D Systems has had positive earnings the last four quarters and has projections for profitability going forward. The numbers below show that iRobot is more expensive in the near-term but has a higher expected growth rate for the next five years which generally will justify a higher valuation.

Companies generally report two different variations of profit margin. While both are important, gross profit margin is the more basic of the two because it does not take overhead costs into consideration. Operating margin provides a clearer picture.

With regard to margins, iRobot's numbers are fairly impressive on both metrics. Gross profit margin has expanded four years in a row and the most recent quarter showed a 2.3% YOY increase from Q2 of 2016. Operating margins have been relatively steady even as R&D spending has risen. Overall, the numbers are strong. 3D Systems, on the other hand, has struggled. Gross margins are down 0.3% YOY while operating expenses have increased, led by a 17% uptick in R&D spending. As the chart below shows, operating margin for 3D Systems remains negative. 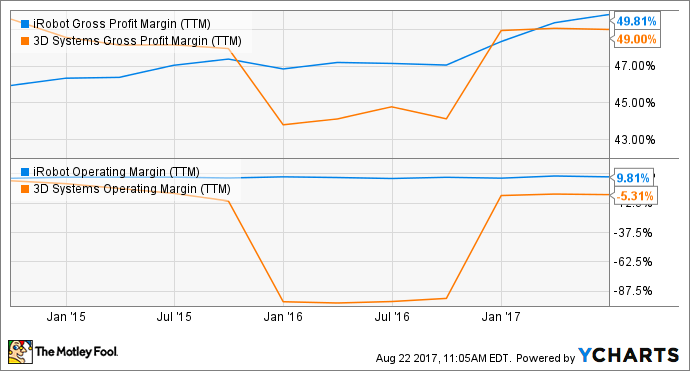 This is an important test because a cursory look would suggest that the stocks are equal buys today because they have nearly identical PEG ratios. However, even if analysts are right on the money with their PEG estimates, all PEGS are not created equal. For that reason, I ran some numbers to determine what each company's earnings would be if the analysts were right on the money. Then, I calculated what the stock price of each company would be if I applied a 2022 PE ratio of 23.

While there is competition in every consumer and industrial market, the level of competition from market to market can vary wildly. That is what we see here. iRobot is "king of the mountain" currently commanding an almost unheard of 88% market share of robotic vacuum cleaners in North America and a 64% market share in the world. That is over six times as much as its nearest competitor. Management believes its intellectual property will be a key element in fending off competition. iRobot has the 5th largest electronics patent portfolio in the world and management has vowed to vigorously defend its intellectual property against patent infringement.

The competitive landscape for 3D Systems is a little tougher and it seems to be getting more challenging every day. Not only do they have a long time worthy competitor in Stratasys to contend with, now big names HP Inc. and General Electric have joined the party as well.

Generally, when you think of catalysts you think of new products on the horizon hoping a new product will become the next big thing. In the case of these two companies, the greatest catalyst may simply be the fact that their respective markets are expected to experience rapid growth. iRobot's management recently stated that the immediately addressable market for robotic vacuums in the United States is 2-3 times the currently installed base.  Over the long-term, management expects the market to grow by 700%.

Similarly, the current global 3D printing market was $4.8 billion last year but will grow to $20.5 billion by 2020. New products are a wild card and are very hard to predict but if growth predictions hold true in both of their respective markets, both companies stand to benefit.

I like disruptive innovators so I would love to cheer for both companies but cheering for them is different than putting money behind them. 3D Systems may do well for investors but because industrial markets are less predictable than consumer markets, I am a little more cautious. iRobot has dominant market share in a fast growing market and while iRobot may not be able to hold onto its impressive market share forever, I think significant revenue and profit growth are almost guaranteed for the next year or two. Despite the lofty valuation, if I had to choose one company to invest in right now, it would be iRobot.