Shares of American Airlines (NASDAQ:AAL) stock closed up 5.4% on Friday, mirroring -- but exceeding -- similar rebounds in the stock prices of United Continental Holdings and Delta Air Lines, up 3.1% and 3.2%, respectively. There was no news of particular note in any of these cases to explain why the shares went up today.

There was a bit of news, however, that explained why all three of these airline stocks went down earlier in the week. On Wednesday, discount Icelandic flyer WOW Air announced it would begin pricing flights from four Midwestern airports -- Detroit, Cincinnati, Cleveland, and St. Louis -- to Reykjavik at the bargain basement level of $99 one way, with discount connections to mainland Europe starting at $149.

Commentators are describing this as a "rumble over the Atlantic," as discount airlines like WOW gear up to steal market share from legacy American airlines like American, United Continental, and Delta, which currently run about one-third of transatlantic flights, and depend on these flights for between 10% and 15% of their revenue streams. In response to that risk, shares of the big legacy airlines all shed between 2% and 3% of their market caps on Wednesday.

Chances are, the reason that American Airlines stock rebounded on Friday is that investors, on further consideration, are deciding the risk isn't as great as it seemed initially, earlier in the week. 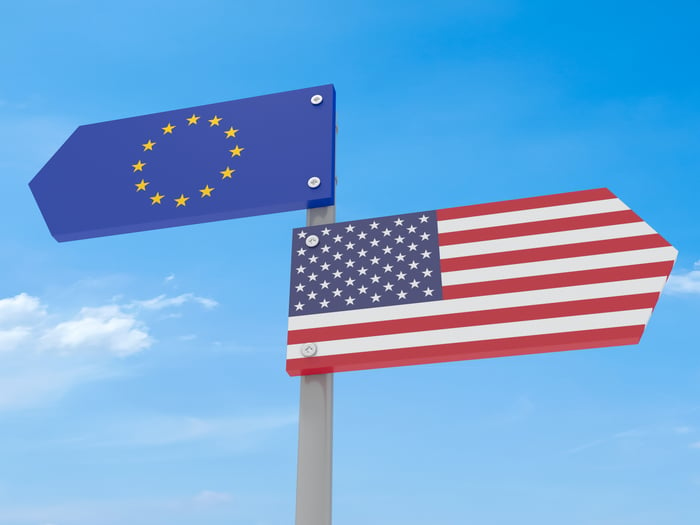 How great the risk really is may only become apparent after WOW begins its new Midwestern routes, and after we have a chance to see how they affect revenues at American Airlines and its peers. In that regard, WOW's flights out of Detroit, et al., are expected to begin flying in the spring of 2018, meaning that airline investors can look forward to another three or four quarters of uncertainty before these concerns are laid to rest -- or confirmed.