Chinese social media company Momo (NASDAQ:MOMO) recently posted impressive second-quarter earnings that crushed analyst estimates on the top and bottom lines. Yet the stock, which has already more than doubled this year, fell 20% following the report -- presumably on concerns about its rising expenses, slowing growth, and rich valuation.

I previously highlighted Momo as a great growth play on the Chinese tech market but also warned that it would be a volatile investment. Does Momo's recent dip represent a buying opportunity for long-term investors? 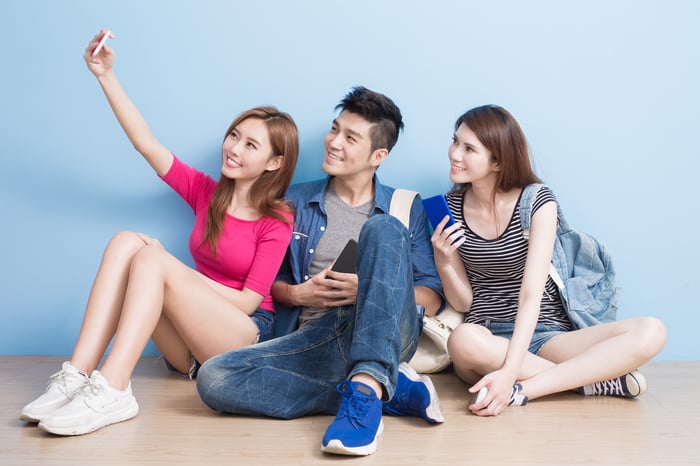 Momo's namesake app lets users find each other via personal profiles and location-based data. Since it's often used for dating purposes, it's commonly called the "Chinese Tinder". It also owns a live video-streaming service, through which viewers can buy virtual gifts for their favorite content creators, and a mobile gaming platform.

Monthly active users (MAUs) rose 22% annually to 91.3 million last quarter, but that's still tiny compared to bigger social media apps like Weibo (NASDAQ:WB) and Tencent's (OTC:TCEHY) WeChat -- which respectively have 361 million and 963 million MAUs. As Weibo and WeChat expand their ecosystems into the live-streaming market, they could eventually marginalize Momo.

The company is fighting to keep up with its bigger rivals, reporting costs and expenses surging 189% annually to $246 million (79% of revenue) last quarter due to higher broadcaster revenue shares, payment channel fees, marketing and promotional expenses, infrastructure expenses, and the ongoing expansion of its workforce. Any additional competitive pressure is likely to worsen the situation.

Meanwhile, Momo's revenue growth is slowing down, rising 215% year over year to $312.2 million last quarter, but that marked its slowest growth rate in five quarters. Management expects this deceleration to continue with 115% to 118% sales growth for the current period, indicating that rising expenses could eventually eclipse revenue growth.

As a result, earnings have been wobbly. While non-GAAP earnings almost tripled to $0.35 per share last quarter, but that represented a 20% decline from the previous quarter.

While the slowdown in growth is disappointing, we can't expect Momo to put up triple-digit growth rates forever. As things stand now, its core businesses are firing on all cylinders.

Cash and equivalents went up from $651.3 million at the end of fiscal 2016 to $846.3 million last quarter. That growing war chest, along with its clean balance sheet, gives the company room to expand via acquisitions. With a fairly low market cap of $7 billion, Momo also remains a potential buyout target for bigger tech companies like Weibo and Tencent.

Wall Street expects Momo revenue to rise 122% this year and 37% next year, while earnings follow suit with 81% and 40% growth, respectively. The stock trades at 42 times trailing earnings -- which is slightly higher than the industry average of 36 for internet information providers -- but that premium is supported by its current growth rate.

My verdict: Momo thrives in the water

Recent volatility can be attributed to queasy investors taking profits instead of any insurmountable threats to its business model. Its growth is moderating, but that's mostly due to the law of large numbers. As long Momo keeps adding MAUs, introducing new features, and growing revenue at a faster rate than its expenses, its stock has room to run.