Because JPMorgan Chase (NYSE:JPM) is already the biggest bank in the country, it's not going to grow at the same rate as a smaller bank. Nevertheless, it's the type of bank that performs solidly across a broad range of financial measures.

There are three metrics in particular that are especially revealing: profitability, growth in book value, and dividend yield. It probably goes without saying, but the more money a company makes, the faster its shares are likely to climb. This is why profitability is so important.

There are two general ways to measure a bank's profitability. The first method is return on assets. It is calculated by dividing a bank's annual earnings by its total assets; a higher ratio is obviously better. The second is return on equity, which is calculated in the same way, but shareholders' equity is in the denominator, as opposed to assets.

Both of these metrics are good ways to gauge profitability, but I prefer return on assets, because that excludes the influence of leverage. A bank that's able to outperform its peers without juicing its leverage, which increases risk, is exactly the type of bank you want to invest in.

On this score, JPMorgan Chase performs well. Its return on assets in the latest quarter was 1.1%. To put that into context, a figure of 1% is often considered to demarcate between well-run banks and the rest.

Generally speaking, a bank's share price will track its book value per share, which is calculated by dividing a bank's shareholders' equity by its outstanding share count. 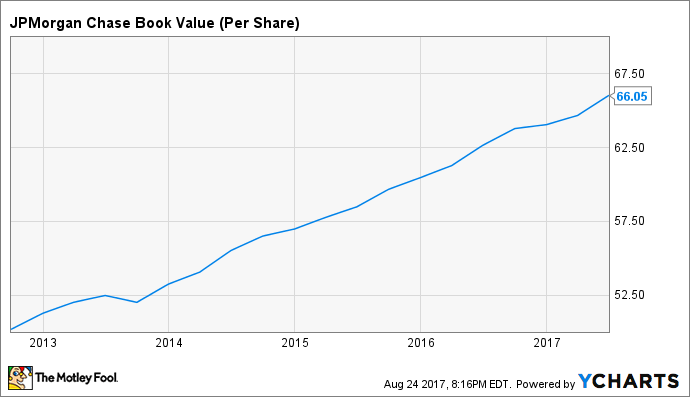 An annual growth rate like that won't make you rich overnight, but over a long period of time, and combined with JPMorgan Chase's quarterly distribution, it should produce a very respectable return.

The final metric that investors in bank stocks, and JPMorgan Chase in particular, will want to keep at the forefront of their minds is the dividend yield. It is calculated by dividing a bank's annual dividend by its share price.

A dividend-paying stock is similar in a way to a bond, which pays out interest on a set schedule. But the difference is that a bond's underlying value stays relatively stable, whereas a stock's price can increase.

JPMorgan Chase's dividend yield at today's price is 2.18%. Compared to its peers on the KBW Bank Index, that's a little below average, but slightly above the median.

It's by combining the dividend yield with the book-value-per-share growth that one can get a sense for the type of annual return a bank stock will generate. In JPMorgan Chase's case, that comes out to approximately 7.6%.

While that return is not likely to get an aggressive growth investor excited, it will translate into a hefty chunk of change for buy-and-hold investors over a long time horizon.