Floyd Mayweather is one of the world's richest professional athletes and has built an estimated net worth of roughly $450 million throughout his incredibly successful boxing career. The undefeated, 40-year-old pugilist has been at the peak of his sport for roughly two decades, earning more than any other fighter in history and racking up 49 consecutive victories. With that kind of performance and the incredible revenues that his fights have brought in, it's not hard to see why he has the nickname "Money." And Mayweather's net worth is still growing.

After announcing his retirement for the second time in 2015, Mayweather once again opted to return to the world of professional sports for at least one more big fight and payday -- facing UFC sensation Conor McGregor in a match that is expected to be one of the highest-grossing fights ever. 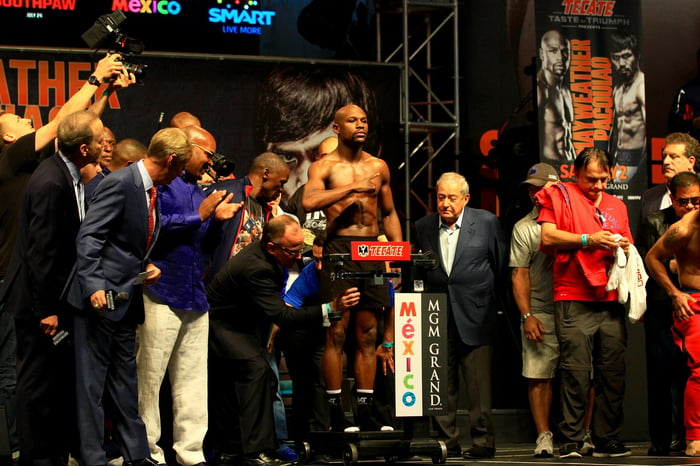 How did Floyd Mayweather build his net worth?

Mayweather came from a family of boxers and started training in the sport at an early age. At 16, he won the Golden Gloves Championship -- an annual amateur boxing competition that is held in the United States and has helped launch the careers of many famous fighters. He then competed in the 1996 Olympics at age 19 and won a bronze medal in the featherweight division but lost out on the semifinal due to a controversial decision. The fighter made his professional debut that same year, beginning a long climb to become one of the most successful boxers in the history of the sport.

Money Mayweather racked up 33 consecutive victories before scoring his first pay-per-view (PPV) event in 2005 -- and earned $3.2 million for the fight with Arturo Gatti. His victory in the match set him up for a major paygrade increase and a showdown with Oscar De La Hoya -- a fight that he would win and garner roughly $25 million for.

Prior to the De La Hoya fight, Floyd elected to pay $750,000 to end his contract with his promoter. The move proved to be a wise one, as Floyd started his own promotion company which allowed him to be paid as both fighter and promoter.

In 2013, the boxer signed a 30-month, six-fight contract with CBS's Showtime division that guaranteed him $32 million in base pay per contest as well as a cut of PPV sales once they crossed a designated threshold. Mayweather's net worth exploded thanks to the deal and saw the fighter earn more than $80 million for his 2013 bout with Saul Alvarez, but even that payday paled in comparison to what Mayweather would make from his 2015 match with Manny Pacquiao.

The Mayweather-Pacquiao fight was one of the most hyped and financially successful sporting events in history. The bout reportedly brought in more than $600 million in total sales -- setting a record for a single day sporting event and a new high mark for PPV subscriptions at 4.6 million. For the 36-minute showdown with Pacquiao, Mayweather reportedly earned a payout between $220 million and $250 million. 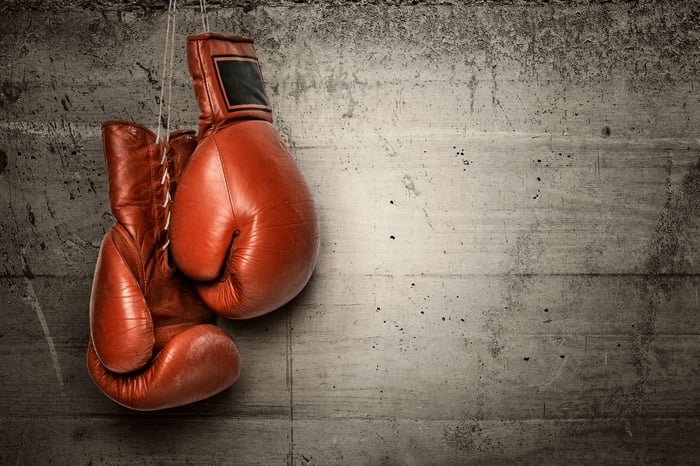 Floyd announced he was hanging up his gloves after the Pacquiao fight, however, his ride into the sunset was cut short as he accepted a fight with Andre Berto just four months later -- a contest that he would earn roughly $32 million for and win by unanimous decision. The victory pushed Floyd's lifetime fight earnings north of $700 million and was once again followed by an announcement of retirement, but this move away from the sport was also to be short lived.

Mayweather's fight with McGregor is expected to be the most-ordered pay-per-view event ever, with current estimates anticipating roughly 5 million buys for the Showtime production. Floyd has stated that he expects his overall earnings from the fight to come out to over $300 million.

Unlike many similarly high-profile professional athletes, Floyd has taken a cautious approach to endorsement deals. Mayweather did have a shoe deal with Adidas' Reebok division in 2009, but it only lasted a year and was not renewed. The fighter also received $1 million each from Restaurant Brands International's Burger King, sports-betting website FanDuel, and luxury-watch company Hublots for wearing their logos to his fight with Pacquiao, and The Telegraph reports that he will earn roughly $25 million for merchandise and endorsements at the McGregor fight.

In the lead up to Floyd's 50th professional fight, Forbes estimated that the boxer had earned roughly $30 million from promotional deals and merchandise sales, so his overall income from those sources is certainly a substantial sum. But that figure is much lower than might be expected given that high-profile athletes often earn more from endorsements than their sporting contracts.

While Mayweather has earned an incredible amount of money over his career and has investments and business ventures that should ensure he continues to generate cash even after his fighting career is over, he also has a reputation for being a big spender and living a lavish lifestyle.

In the lead-up to the McGregor fight, it was revealed that the Internal Revenue Service had issued Floyd liens for unpaid taxes in 2010 and 2015 totaling $30 million. Mayweather asked to defer payment until after his fight with McGregor and stated that most of his assets at the time were illiquid.

Adding up the fighter's earnings from endorsements and fights (including the McGregor bout) and accounting for taxes and expenses, Mayweather likely has a net worth in the range of $450 million.

What Is Floyd Mayweather's Net Worth? @themotleyfool #stocks Next Article
Current