Sears Holdings (NASDAQ:SHLDQ) is arguably the poster child for retail devastation. Shares of the company, which owns Sears and Kmart, plunged nearly 95% over the past decade as mall traffic plunged, superstores and e-tailers took over, and the company's insular culture prevented it from countering those threats in a timely manner.

That mess was exacerbated by the merger of Sears and Kmart in 2005, which merely proved that two wrongs don't make a right. That deal was engineered by hedge fund manager Eddie Lampert, who became Sears Holdings' CEO in 2013. 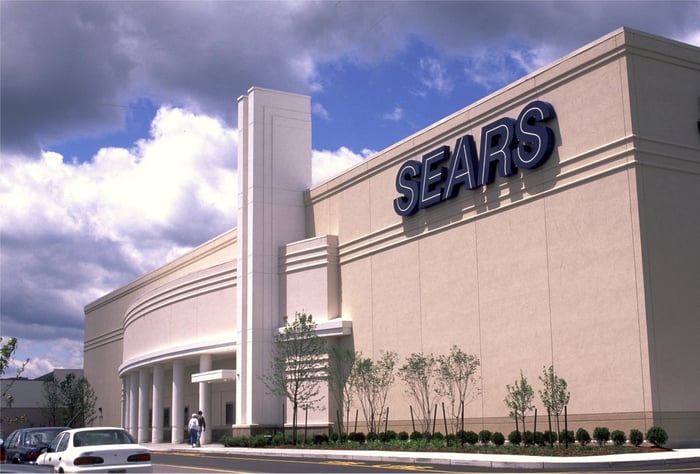 Sears has lost nearly 80% of its market value since Lampert took over. Lampert can't be removed from power -- he's the chairman and owns almost half of the company's stock -- but the ailing retailer could certainly benefit from some fresh leadership. Let's take a look at four signs that indicate that it's time for Lampert to step aside.

Lampert's main strategy has been to close stores. Between fiscal 2012 and 2016, Sears reduced its total store count (Sears, Kmart, and specialty stores) by 44% to 1,430 locations. During that same period, rival JC Penney (OTC:JCPN.Q) cut its store count by just 8% to 1,013 locations.

Sears' store count dropped to 1,250 in the first half of 2017, and it plans to close another 150 stores during the current quarter. That strategy might make sense if Sears reinvested the savings back into renovating its stores. Instead, Lampert used that cash to buy back stock and pay off Sears' debt. This self-consuming cycle can't last forever, and Sears will eventually run out of stores to liquidate.

Instead of improving its stores, Sears focused on monetizing its real estate -- through sales of its stores and its spinoff of the REIT Seritage Growth Properties (NYSE:SRG) -- and the sale of its Craftsman brand to Stanley Black & Decker. It's currently exploring similar deals for its Kenmore and Diehard brands.

Simply put, Sears is burning all its furniture to stay warm when it should have invested in a radiator. That strategy might postpone Sears' imminent death, but it can't possibly generate sustainable sales and earnings growth.

Here's a chart of Sears' revenue and net income growth over the past decade: 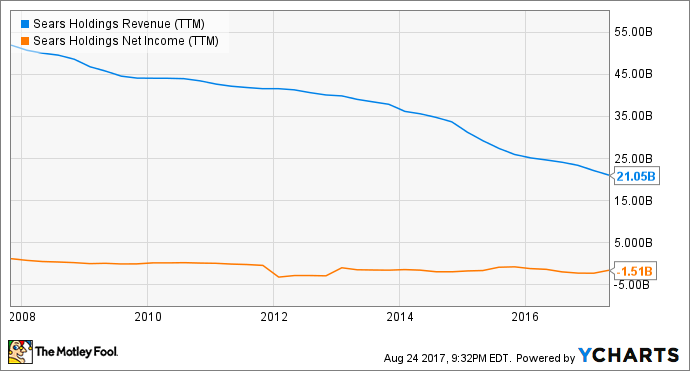 There's no indication that the company's revenue declines will stop, or that it will ever achieve profitability. Sears' revenue plunged 23% annually to $4.37 billion last quarter, which represented its steepest decline in nine quarters. Wall Street expects Sears' revenue to drop 24% this year, compared to a 12% decline last year.

Sears' comps fell 11.5% during that quarter, with a 13.2% drop at Sears and a 9.4% decline at Kmart. Sears noted that the reduction of its consumer electronics and in-store pharmacies exacerbated those declines.

Those numbers are terrible compared to those of other "struggling" department stores -- JC Penney's comps fell 1.3% last quarter, while Kohl's dipped just 0.4%. If Sears simply spent more money turning around its businesses or pivoted them toward better-protected niches like off-price retailing, it might be reporting similar results by now.

Sears' adjusted net loss narrowed from $2.03 per share in the prior year quarter to $1.16, but analysts still expect its annual losses to widen over the next two years.

While other retailers are busy investing in e-commerce channels, streamlining stores, and securing store-in-store partnerships with major brands, Sears' "turnaround" plans are uninspiring.

It recently signed a deal with Amazon to sell Kenmore products online, added Time magazine subscriptions to its 'Shop Your Way' memberships and built a concept appliance and mattresses store -- which would presumably be better protected against e-tailers.

But none of those moves address the elephant in the room: fewer people are visiting Sears' dated brick-and-mortar stores, and the company refuses to make bold investments in improving them.

Is it too late to save Sears?

In an ideal world, Lampert would step aside and allow an outsider -- preferably an executive from a successful e-tailer, superstore, or off-price retailer -- to take over.

Unfortunately, Lampert can't be replaced, and he remains focused on propping up the stock with store closures and brand sales. That isn't a sustainable strategy investors should invest in -- even if the stock looks ludicrously cheap at 0.04 times sales.