Income investors looking for low-risk growth may find what they're looking for in water stocks. That's because water utilities usually operate in regulated markets, which provide reliable long-term growth. If a company maintains, modernizes, and invests in water distribution infrastructure, then it can ask state regulators for rate increases. Some of the revenue from approved rate increases is distributed to shareholders as a dividend, while the remaining capital is redeployed into the next round of infrastructure investments. Rinse and repeat.

The largest publicly traded water utility, American Water Works (NYSE:AWK), is often the measuring stick for the industry, but several smaller regional players have intriguing growth prospects. Would investors be better off buying the leader or the much smaller California Water Service Group (NYSE:CWT)? 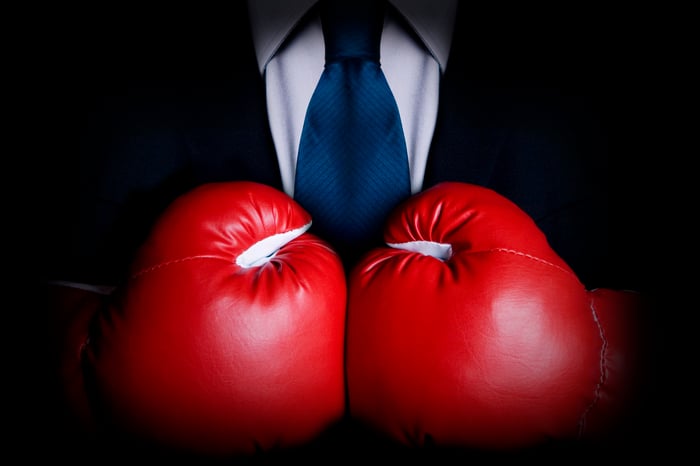 Both water utilities are enjoying a boost from a new rate periods in their respective markets, which began this year and run through 2021. While water stocks have a pretty good track record of growing earnings each and every year, Wall Street is expecting sizable improvements in 2018 after rate increases are fully realized. Here's how the two companies stack up on various valuation metrics:

The much larger American Water Works sports cheaper valuations based on both current and future earnings. While the pair are about equal on dividend yield and price to book, California Water Service Group is much lower on a price-to-sales basis. It's also expected to see a larger relative increase in earnings in the next 12 months.

Future earnings expectations roughly reflect the first half 2017 performance of the two companies. American Water Works reported year-over-year earnings growth of 11% through the first six months of this year, while California Water Service Group realized 86% growth in EPS during the same period.

Why did the latter see such a massive improvement? Emergency drought costs in California, which took a big bite out of earnings in 2016, have been lower this year. (Even better, the company can recover about $2.9 million of those costs through special rate increases, which is equivalent to about $0.06 per share.) Plus, two big rate increases have kicked in. The year-over-year improvement has lifted California Water Service Group stock 18% in the last year, although it still trails its larger peer in longer periods. 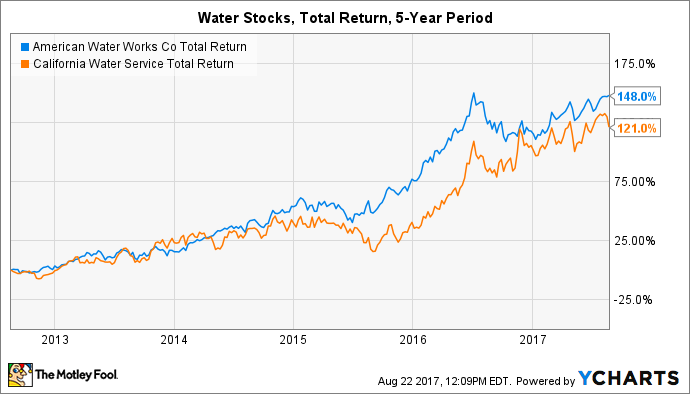 The smaller regional player faces a bit more risk than American Water Works simply by operating entirely in the state of California. Similar to other parts of the country, water utilities there must contend with lead levels, but have added state requirements including ponying up to perform lead tests at schools that request it and filtering out increasing levels of old industrial chemicals such as 1,2,3-TCP. That can be expensive, although California Water Service Group is well positioned to meet new requirements that come into effect in the next few years. It's even being proactive about it.

Here's the thing: California Water Service Group is seeing a big year-over-year increase primarily driven by rate increases. But those won't happen each year, and operating in only one regional market means it basically has to wait for the next rate period to see higher growth rates.

American Water Works isn't dependent on a single market. It boasts regulated operations in 16 states (including California) -- all of which can hand down rate increases. And when it comes to water utilities, size matters. The company can pool income from various markets and reinvest it in the most valuable opportunities such as, say, replacing lead service lines in Rust Belt communities faster than local municipalities can, with the reward being incrementally higher rates in the next few years.

Diverse geographic investments make every dollar of investment go further. So although California Water Service Group is having a good run in the last 12 months, American Water Works has been able to consistently grow earnings over longer periods of time. While earnings growth has stagnated in the last year or so, management expects to grow earnings 7% to 10% annually for the foreseeable future. 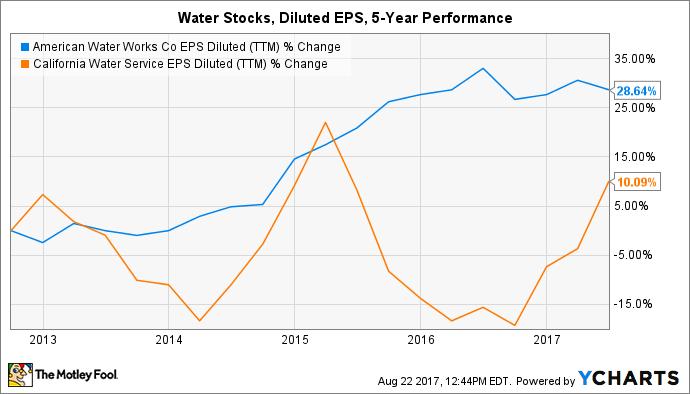 Which water stock is the better buy?

Although California Water Service Group is in the middle of a great run, I wouldn't expect the current rate of growth to be sustainable beyond 2018. Therefore, American Water Works is the better buy in this matchup. The investment strategy used by management has consistently paid off over long periods of time. With relative costs at all-time lows, the company should be able to deliver on its goal of growing earnings by at least 7% each year. That said, water stocks are generally pretty expensive, as investors pay a premium for the relatively safer (albeit slower) growth the industry offers. So it may be best to look elsewhere for both income and growth.