Chinese e-commerce giant Alibaba Group (NYSE:BABA) is a legend in the making. The company combines start-up-like business growth with a mature financial platform, and founder and executive chairman Jack Ma is evolving Alibaba into a global leader in the online retail industry.

Though the company has been around since 1999, Alibaba joined the public markets in America as recently as 2014. I was intrigued by this unique business from the start and bought a few shares shortly after the IPO. That investment has doubled in value in three years, and I have no plans to sell my Alibaba stake anytime soon.

Here are eight of the biggest reasons why I'm in for the long haul.

Jack Ma has a lot of skin in the game. He still owns roughly 159 million shares of Alibaba, or 6.3% of the company's total share count. His stake is worth $27 billion today, making Ma one of the 25 richest people on the planet.

The chairman's personal fortune is closely tied to his company's success, so Ma's incentives are very much aligned with the interests of regular shareholders. That's a big plus in my book.

Annual revenue stands at $26.4 billion today, up from $15 billion in fiscal year 2016 and less than $11 billion two years ago. But Alibaba's business reach is actually far larger than its direct revenue collections. The company's online shopping portals managed $547 billion of retail transactions in fiscal year 2017. Ma hopes to lift that metric, known as gross merchandise volume or GMV, to a cool $1 trillion by the year 2019.

According to data from the Gapminder Foundation, gross domestic product per capita was just $3,000. That number has more than tripled 20 years later, landing at $13,300. Compare and contrast that growth rate with a total increase of just 28% in the United States over the same period, and you see why China's economic growth represents an exciting opportunity. After a few more decades, we might see Chinese consumers enjoying a standard of living fully on par with our western benchmarks.

This is Alibaba's core demographic. The more Chinese consumers can spend, the faster Alibaba can grow.

That being said, Alibaba is exploring international growth on a whole new level. Chinese customers account for 86% of Alibaba's total retail sales, but international retail is growing quickly. "Globalization is our long-term strategy," said Alibaba CEO Daniel Zhang in a recent earnings call. "We are very committed to the global expansion."

That's great, because even a thriving Chinese market is still a rather small chunk of a global marketplace with 7.5 billion potential consumers and $74 trillion in annual money flows. 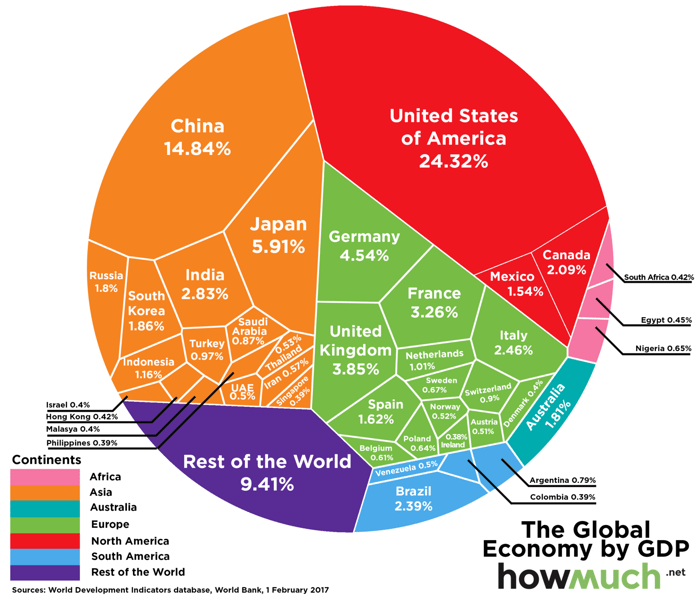 Infographic from the cost information experts at How Much.

So Alibaba is exploring greenfield growth opportunities abroad while also milking an increasingly healthy Chinese home field. That adds up to tons of untapped market reach and decades of opportunity for continued high-octane growth.

The company is also expanding into entirely new market opportunities. Alibaba isn't all about direct retail operations and back-end services for other retailers anymore. In fiscal year 2017, digital media services accounted for 10% of total revenue and cloud computing tools stood for another 6%. What we see today is a powerful capital structure from which Alibaba can launch any number of new business ideas, both in China and overseas.

So far, Alibaba has been riding a unique first-mover advantage to create an unassailable retail empire. It's fair to say that the company has no significant competition in the business-to-business segment. The largest e-commerce rival in China is the far smaller JD.com (NASDAQ:JD), whose sales in the last fiscal year clocked in at $37 billion but GMV stopped near $99 billion. JD's impressive scale notwithstanding, that company is still unprofitable.

On a global level, Alibaba will lock horns with established leaders such as eBay (NASDAQ:EBAY) and Amazon.com (NASDAQ:AMZN) in North America and MercadoLibre (NASDAQ:MELI) in Latin America. That sounds like tough going at first, and certainly won't be an easy conquest, but Alibaba is already making inroads. Many large-scale sellers on the Amazon Marketplace, eBay, and MercadoLibre platforms and actually sourcing their goods from Alibaba's Taobao and Tmall sites. If -- or, more honestly, when -- Alibaba sets up its own online marketplace in the Americas, that platform could bleed small-business sellers away from its rivals very quickly.

It's a juggernaut of e-commerce, already setting its sights on new markets.

Alibaba's growth won't stop at $1 trillion in GMV. Jack Ma wants to serve more than 2 billion consumers and 10 million small businesses 20 years from now, which would make Alibaba's business platform something like the fifth-largest economy in the world. The bigger fish would consist of national or continentwide economies like the U.S., China, Europe, and Japan.

"If a company can serve two billion consumers, that is one-third of the total population of the world. If a company can create 100 million jobs, that is probably bigger than most governments can do. If a company can support 10 million profitable businesses on its platform, this is called an economy," Ma said at an investor conference in June, according to South China Morning Post.

It's an audacious vision, but Ma seems to have the chops to make it a reality. It can't hurt to buy into this bold idea a couple of decades in advance.