The first step on many journeys these days is a visit to an Expedia (NASDAQ:EXPE) website. Operating in a de facto duopoly with Priceline Group (NASDAQ:BKNG), Expedia's many sites covering nearly every conceivable travel category make it almost unavoidable for vacationers-to-be.

It nearly goes without saying that Expedia draws buckets of revenue from its many services -- to the tune of nearly $2.6 billion in revenue in its most recently reported quarter. Let's take a closer look at where that money comes from. 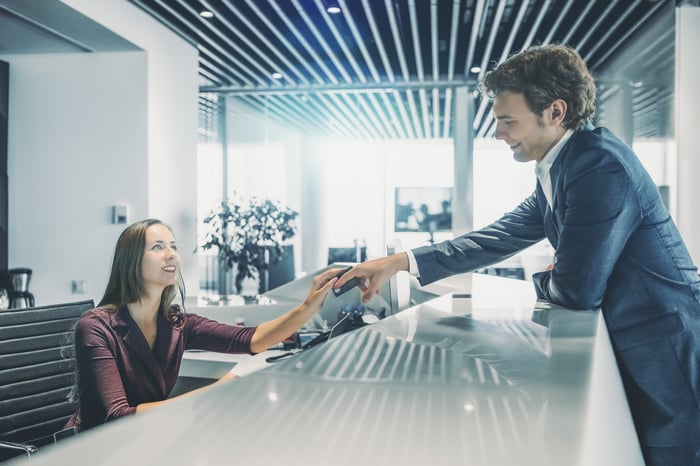 In its second quarter, 66% of its revenue derived from the first activity. Expedia generally utilizes the "merchant model" when offering rooms. This means it'll purchase that accommodation at a discount, then turn around and sell it at a sizable markup to the end user. Such rooms are booked in advance by customers and paid for at the time of purchase.

To a lesser extent, it employs the agency model, a more traditional arrangement in which Expedia simply facilitates a booking and takes a smaller percentage of the total as a fee. In contrast to the merchant model, at no point does the company directly hold the room being rented.

Expedia's second-largest contributor to revenue was -- perhaps a bit surprisingly for an online travel agency (OTA) -- advertising and media. The category was responsible for 12% of the company's overall top line for Q2.

Most revenue in this category came from Trivago (NASDAQ:TRVG), the hotel metasearch company that's still majority-owned by Expedia. Trivago takes in money from referrals (if a user books a stay via its website, the lodging provider pays a small fee to the company). That's why Trivago's revenue is included in this category, and not in Expedia's overall hotel segment.

Meanwhile, the Expedia Media Solutions unit functions as the in-house agency selling ad space across Expedia's many media properties. (Similar to Priceline, it has a raft of assets in its portfolio, including Orbitz, Hotels.com and travelocity.)

Rounding out the top three money earners is flight bookings, responsible for 9% of Expedia's total revenue in the second quarter. That single-digit figure might be a bit surprising to some; after all, this is a travel agency. But airlines have been rather more successful than hotels in channeling bookings to their own sites instead of OTAs; as a result, selling flights for Expedia is much less lucrative an activity than hotel room booking.

Hotel booking is not only the major revenue-maker for Expedia, it's an activity that's been growing and should continue to do so. For the first six months of 2017, the company reported that its room night growth rate was 17% on a year-over-year basis; no wonder its total lodging revenue grew by 16%.

A small engine helping to drive that growth was HomeAway, the DIY lodging company Expedia bought in 2015. In Q2, HomeAway recorded quite the improvement in results, on the back of exponentially rising interest in such lodging services. Gross bookings rose 45%, with revenue advancing 31% to $224 million.

Research from Susquehanna Capital that I cited in a previous article forecasts that booking in the DIY accommodation segment (which includes big HomeAway rival AirBnB) should rise by 20% in the 2016 to 2018 period. This well eclipses the 13% forecast for traditional lodgings such as hotels.

Going forward, Expedia will likely continue to rely heavily on the money it makes from accommodation bookings. That's certainly no bad thing given those encouraging double-digit growth forecasts.