A couple weeks ago, I lamented the outrageous valuations of defense companies in this market. Valued on sales, all five of the nation's biggest defense contractors -- the Boeings, Lockheeds, and General Dynamics of the world -- sell for far more than their historical average one times annual sales ratio. But what about the up-and-comers?

Is a new recommendation just out this morning, investment banker Credit Suisse makes the case that government services and defense contractor Harris Corporation (NYSE:LHX) has emerged as a "Tier 1/Tier 2" defense contractor capable of competing with the best in the business -- and cheap enough to buy, to boot.

Is Credit Suisse right about that? Read on and find out. 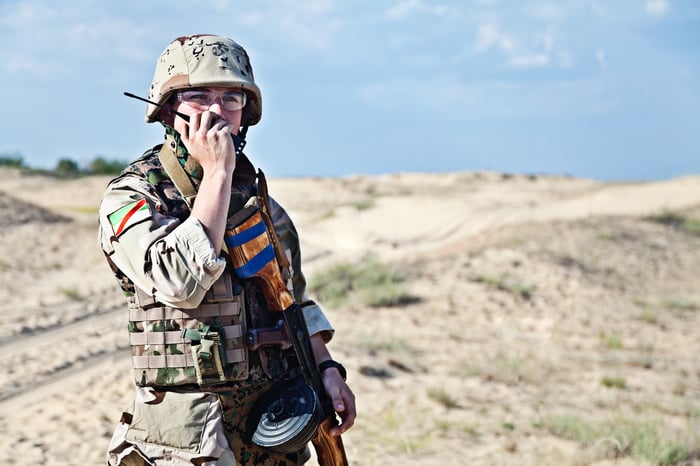 Credit Suisse initiated coverage of Harris with an outperform rating and a $144 price target this morning. Harris stock currently sells for just over $121 a share, implying about 20% upside from the current price.

Why does Credit Suisse think Harris stock will go up so much? As the analyst explains in a note covered on TheFly.com this morning, it all comes down to profits -- and margins. Since acquiring rival military contractor Exelis in 2015, Harris has embarked upon a mission to cut costs by exiting some "low margin, non-core businesses," and has "fixed other underperforming legacy Exelis contracts."

More detail on the company's revival can be found in Harris' fiscal Q4 and full-year 2017 earnings report, which came out on Aug. 1. There, Harris explained how it transformed a small decrease in organic revenue (the result of trimming less profitable contracts) nonetheless resulted in a 5% increase in per-share profits. Moreover, the company generated "record free cash flow" of $850 million last year.

Harris CEO William Brown directly attributed the growing profits despite falling revenue to "the successful execution of our strategic priorities" at Harris last year. Going forward, Harris says it intends to "focus on technology-differentiated, high-margin businesses while continuing to invest in innovation, drive operational excellence and successfully integrate Exelis." Revenue growth is expected to return "in fiscal 2018" (note: Harris' fiscal 2018 has already begun) and will accelerate "in the medium term."

What will drive Harris' growth?

Recent contract news tends to back up Harris' prediction of strong growth ahead. The company won part of a $450 million Pentagon contract earlier this month, providing "technical development, technical and operational integration" to the U.S. Army. Not long after that news broke, Harris reported that the U.S. General Services Administration (GSA) picked it to be one of 10 companies working on an indefinite-delivery, indefinite-quantity (IDIQ) contract to provide the government with "information technology, telecommunication and infrastructure services" worth up to $50 billion.

Even spread over 15 years, and even assuming Harris wins no more than a 10% share of the funds on offer, this contract promises to -- single-handedly -- support 5% ($333 million) of Harris' annual revenue stream. At the high margins Harris is now earning, this GSA contract promises to be a big source of profits for years to come.

Harris says it will probably earn between $5.85 and $6.05 per diluted share on sales of between $6.02 billion and $6.14 billion this year. That works out to nearly a 28% increase in profits on sales growth of only 3% or so -- a hearty validation of Harris' plan to cut low-margin business even as it grows profits regardless. The company also expects to meet or beat 2017's free cash flow number, churning out between $850 million and $900 million in cash profits.

And yet, analysts who follow Harris stock are only expecting the company to grow its profits at about 11% annually over the next five years, says S&P Global Market Intelligence. On the one hand, 11% growth seems a bit slow to justify Harris' current 26 P/E ratio -- or even the 20.5 times forward earnings Harris stock will sell for if it hits the midpoint of guidance.

On the other hand, 11% growth seems a bit of a low bar to clear, given how fast Harris says it expects to grow this year, and given the size of the contracts it's been winning lately (and at the improved profit margins it's been earning). If Harris does in fact manage to grow earnings 28% this year, and maintain a growth rate anywhere near that fast for longer than one year, Harris stock could very well do what Credit Suisse says it will: Outperform the stock market.

Is Harris Corporation Stock a Hidden Gem of the Defense Industry? 1 Analyst Thinks So @themotleyfool #stocks $LHX Next Article
Current