This healthcare company is growing fast and is up 400% over the past three years. Here's why investors can expect the good times to continue.

Alison Bauerlein's grandmother, Mae, was suffering from chronic obstructive pulmonary disease (COPD) at the turn of the century and was prescribed oxygen therapy. Thankfully, the therapy itself helped Mae to get the oxygen that she needed, but she often complained about the hassle of lugging around a heavy oxygen tank.

In 2001, Alison and two of her close college friends took it upon themselves to do something about this problem. The trio founded a company called Inogen (INGN -3.07%) and less than three years later presented Mae with their solution. Mae was thrilled with what her granddaughter had created, and Inogen has been improving the lives of patients who need oxygen therapy ever since. 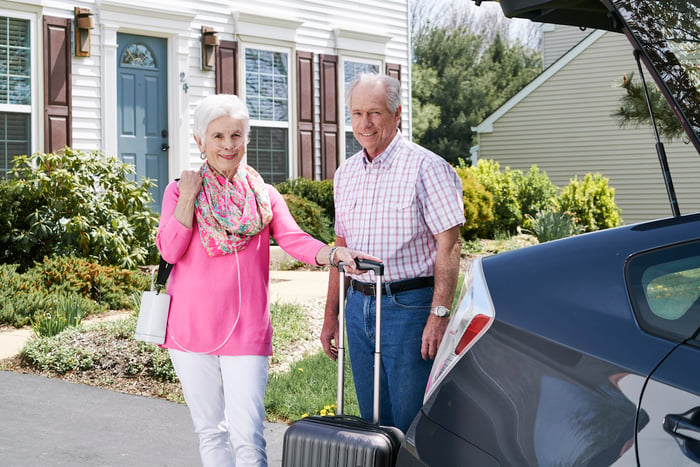 Fast-forward to today, and Inogen's products are now helping thousands of patients from around the world to get on oxygen therapy. What's more, the company is profitable, growing fast, and has become a Wall Street darling. In fact, investors who bought in during the company's IPO in 2014 are currently sitting on a gain of more than 500%.

I was recently afforded the opportunity to hold an exclusive interview with Alison (who has since become Inogen's CFO) as well as CEO Scott Wilkinson to learn more about the company. Below are some of the highlights from our conversation. (Some quotes have been edited for clarity.)

I started out the conversation by asking Wilkinson to provide us with an overview of the reasons a doctor recommends oxygen therapy to a patient: 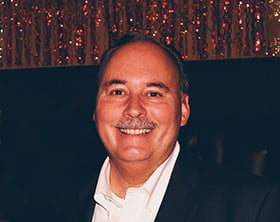 Patients would be prescribed oxygen because their lungs are not able to pull enough oxygen out of room air. Traditionally, the people who need oxygen therapy have developed emphysema from long-term smoking. The other main disease is chronic bronchitis. What that means is, most of the folks who are using oxygen are elderly, because you don't damage your lungs by smoking a cigarette, you damage your lungs by smoking over many, many years. So, most clients are in their 70s or 80s.

I next asked Scott to give us a sense of the current size of the oxygen therapy market:

There are about 4.5 million patients worldwide who use oxygen today. Two-thirds of those patients, about 3 million, are in the U.S. where the market is growing by 7% to 10% annually. Other markets like China and India, while they have very large populations and also a heavy percentage of smokers, they're less developed nations, so oxygen therapy isn't the mainstream there. If you look way out into the future, those should be very large markets.

Next, I asked Scott to opine on the limitations of using traditional oxygen therapy: 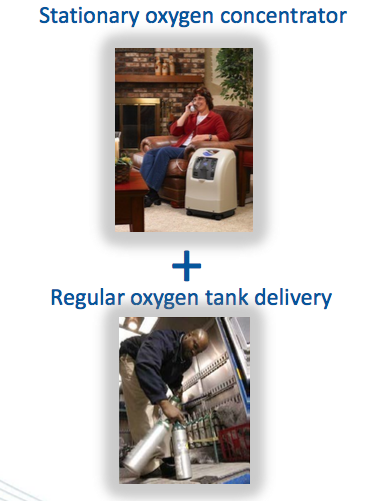 For the last 30 or 40 years, when patients have been prescribed oxygen, they will get a home system that's called a concentrator, looks kind of like a basement dehumidifier, plugs into the wall, and what it does is it takes room air and strips oxygen out of it. The second part of their system is an oxygen tank which is used for portability. However, oxygen tanks are big, bulky, and ugly. People tend to carry them in a cart, so they drag them behind, it's hard to go up and down stairs, they stand out in public, and really, they hinder mobility. You can imagine, if you're in your 70s or 80s trying to drag around something like that, you almost just want to stay home.

Given the limitations of traditional oxygen therapy, Inogen innovated a solution called a portable oxygen concentrator (POC). Rather than storing oxygen in a tank, a POC creates an oxygen-rich air flow stream directly from the surrounding air.

I asked Scott to talk about the benefits of using a POC:

The great thing about it from a patient standpoint is it's small. Our two flagship products, one is 4.8 pounds, the Inogen One G3. The other is under 3 pounds at only 2.8 pounds. So, you don't need to drag anything around in a cart. You don't have to worry about dragging something up and down stairs. But from a physical standpoint, you have unlimited oxygen. All you have to do is keep your batteries charged. And you can charge them wherever you go, including in the DC outlet in your automobile. 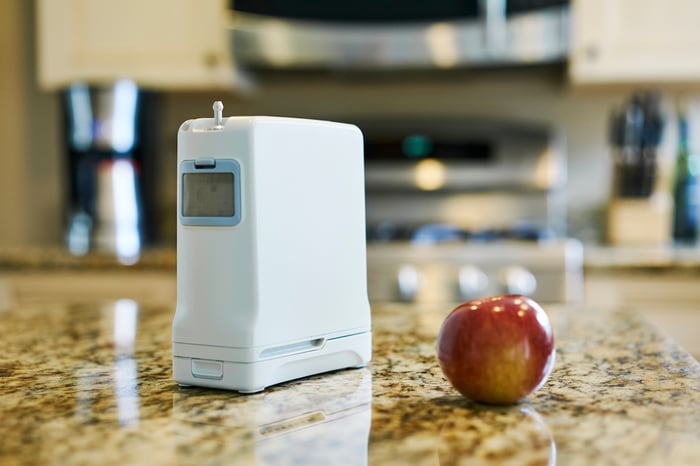 In essence, POCs provide patients with a degree of mobility and mental freedom that oxygen tanks simply can't provide. Furthermore, they are also designed to be simple to use, which is an important feature for some seniors who are not comfortable using complex technology.

Coming up with a great product is one thing, but getting it into the hands of paying customers is another. I asked Scott to describe the company's commercialization strategy and business model:

In the U.S., our primary strategy is direct to consumer. We have the ability to both sell and service to patients without an intermediary, whether it be a distributor or a home care provider. We advertise to patients. We want to make sure that they are aware that there is a better solution than the oxygen tank that they're dragging around. Interested patients talk with our case managers to look at things like their prescription level, how long they've been on oxygen, are they working, are they retired, what kind of medical benefits do they have. About two-thirds have Medicare and one-third have private insurance.

Once completing this process, patients can either buy the product outright or rent it on a month to month basis.

We sell to other home care providers in Europe and Australia and rest of the world. Those are all cash sales to Inogen, a business-to-business transaction, where someone else takes title of the product and collects money from either insurance or directly from the patient.

Understandably, Inogen's differentiated product offering and direct to consumer business model have allowed the company to grow rapidly. So rapidly, in fact, that the company has maintained an annualized revenue growth rate of more than 47% since 2009. 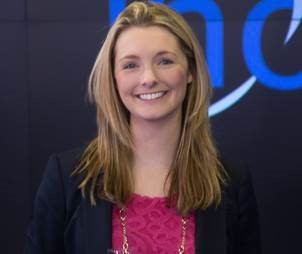 With this success in mind, I asked Alison to share her views of the key metrics for investors to watch as the company moves forward.

The first and foremost is revenue growth. Obviously, we're a high-growth company, and our plan is to maintain a high growth rate for the foreseeable future. We also think that it's important to show profits in the business. I think that's something that's unique about us compared to other growth companies. We think it's important to grow in a way where we can also show profit in the business.

To get a sense of what Alison means, here's a chart that shows the company's revenue and net income growth rates since its IPO in 2014. 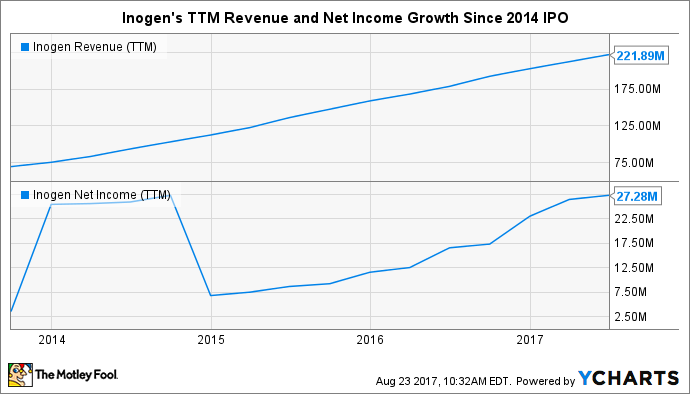 Importantly, since POCs have only grabbed about 8% market share, there are reasons to believe that Inogen will be able to keep these rapid growth rates going for the foreseeable future.

Keeping ahead of the competition?

While Inogen has clearly had a lot of success thus far, the company does not have a monopoly in the portable oxygen concentrator business. In fact, huge companies like Philips, ResMed, and Chart Industries all have subsidiaries that sell POC products and compete with Inogen.

As for the legacy oxygen providers, companies like Linde Group, Apria Healthcare, and Rotech Healthcare have plenty of reasons to work hard to stop their market from being disrupted.

I asked Alison to share what Inogen has done to keep ahead of the competition:

We have to focus on patient preference. That's the differentiator, because that's what's driving all of our leads, our advertising. You have to have something that the patients want. If you start making a product that's just like everybody else's, then you shift to just focusing on making the product less expensive, that's when you lose your edge. So far, we have a good track record, over 10 years of doing it. But what's really important is not the past but the future, so we have to keep doing it.

Scott also noted that the company's commercialization strategy is a major differentiator for the company:

We are the only company that has a go-to-market strategy focused on patients. None of the other equipment manufacturers sell direct or advertise directly. The home care community is pretty focused on price. They're operating in a fixed reimbursement environment. So a much better product, or patient preferred product tends to not interest them that much if it costs more, because they don't get any more reimbursement for it.

Why Inogen deserves a spot on your radar

After speaking with management and thinking through the opportunity, I must admit that I'm quite impressed with Inogen. After all, it is rare to find a company that's rapidly taking market share in a growing market while simultaneously producing a profit.

The only knock against investing in Inogen's stock right now is that Wall Street has caught on to the company's growth story and has priced its shares accordingly. Trading for more than eight times sales and 71 times forward earnings, Inogen is currently being priced for rapid growth, there's no doubt. Any potential hiccup in the company's growth rate could cause shares to tumble.

Still, it's not every day that I come across a company that is growing fast, is profitable, and has a large market opportunity ahead. For that reason, I for one plan on adding this interesting company to my watchlist and would be a happy buyer if the valuation became more reasonable.