There isn't a lot of buzz for the next big thing coming to Disney's (NYSE:DIS) Florida resort, but that may change on Wednesday. Disney's been sending out wind-up Slinky Dog toys to travel writers and top-shelf theme park bloggers, promising an update featuring "special Slinky-related news" out of Disney World tomorrow. Toy Story Land is also mentioned in the mailing.

It's clear that we'll be receiving an update on Disney's Hollywood Studios' Toy Story Land and the upcoming Slinky Dog Dash family-friendly coaster that will serve as the expansion's star attraction. We already know that Toy Story Land will open in the summer of 2018. Disney recently installed the last piece of the coaster track, and while there's a lot of work to be done in fleshing out the 11-acre addition, it should have no problem opening next year. Wednesday's news could offer up a firm opening date, or at least clarify if it will open in the late spring or early summer season. If families are hoping to schedule their Disney World vacations for next year, it's something that they will naturally want to know. 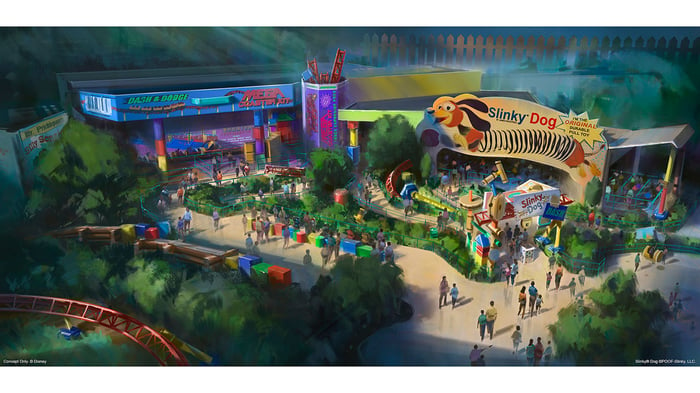 You've got a trend in me

Toy Story Land can't come soon enough. Disney's Hollywood Studios was already being dogged as a "half-day park," and that was before The Great Movie Ride closed down earlier this month. That iconic attraction's closure will make way for Disney World's first Mickey-themed ride, but it's unlikely to open until after Toy Story Land's debut.

Disney's Hollywood Studios is Disney World's least visited theme park. The 10.8 million visitors that it attracted last year, according to Themed Entertainment Association, is a little more than half of the 20.4 million guests that hit up Disney World's Magic Kingdom. With fewer things to do as the park continues its makeover, which will be complete with the arrival of Star Wars: Galaxy's Edge in 2019 and Mickey & Minnie's Runaway Railway, it needs Toy Story Land to open as early as possible.

Toy Story Land will have big shoes to fill next year, and even those may not be enough. Pandora -- The World of Avatar opened at Disney's Animal Kingdom during Memorial Day weekend, and it features an immersive realm anchored by the bar-raising Flight of Passage banshee-riding simulator. It wasn't enough to increase the number of booked Disney World resort nights during the quarter ending in June. Toy Story Land is based on a more endearing intellectual property for Disney fans than James Cameron's Avatar, but it's hard to get excited about an elaborate, but ultimately, kiddie coaster and the Alien Swirling Saucers-themed carnival flat ride.

Disney will be hoping to shake those low expectations tomorrow. Social media was lit up on Monday as the first Slinky Dog Dash coaster trains arrived at Disney's Hollywood Studios. They will likely be part of Wednesday's update.

With Disney shares close to falling to the double digits for the first time this year, every little piece of good news is crucial. Hopefully Wednesday's update offers more than just a shiny Slinky Dog train and a vague summer opening date.