When a chain goes out of business, it's usually because it has run out of money. When that happens, bankruptcy is filed and various creditors -- everyone from vendors to staff to landlords -- fight for a piece of whatever pie remains. That, however, is not what's happening with Starbucks's (NASDAQ:SBUX) decision to close its stand-alone Teavana stores.

Those locations aren't profitable, or as the company reported in its Q3 earnings release, they are "persistently underperforming" and the "underperformance was likely to continue." Because of that, the coffee company decided to close all 379 Teavana stores, with the majority shutting down by spring 2018. Starbucks acquired Teavana in 2012 for roughly $620 million in cash.

Simon Property Group, the largest shopping center operator in the United States, does not want that to happen. The mall owner believes it can legally force Starbucks to keep the 78 Teavanas located in its malls open, at least until their leases expire, and it has filed a lawsuit to make that happen, the Indianapolis Business Journal (IBJ) reported. 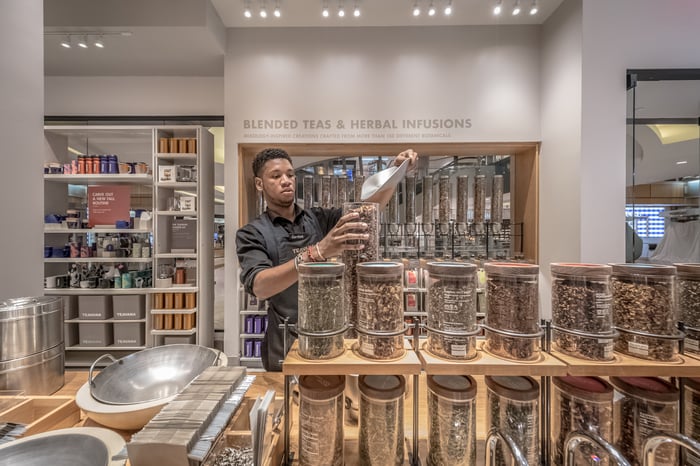 What does Simon say?

The mall operator believes Starbucks has a contractual obligation to keep the stores open. Only two Teavana locations at Simon malls have leases expiring in the spring, according to IBJ. The other 76 have leases that last as long as January 2027.

"In order to successfully operate its shopping centers, Simon depends upon each tenant fulfilling the covenants in their respective leases," the company said in the lawsuit, according to IBJ. "Crucially, each of Simon's tenants promises that it will open and operate continuously for the entire term of its lease."

Keeping the Teavanas open would prevent Simon-owned malls from having another empty space in a market where closures have been happening at an unprecedented pace.

"I do suspect that Simon has a case," said Andrew Garr, a New York real estate attorney in an email exchange with The Motley Fool. Garr stressed that he has no specific knowledge of this case nor has he seen any of the documents to speak in anything other than general terms.

While noting there are various things that play into it, Garr said Simon's case could hinge on what's called a "continuous operations clause," which is often used when a mall tenant "bluffs closing in an attempt to settle by trying to reduce rent or dropping some stores when they have several with the same landlord," he wrote.

Garr also wrote that "Sometimes a continuous operations clause cannot be used if the lease contains a provision that it is inoperative if there is a closure of an anchor tenant or a reduction in percentage occupancy in the mall. This protects the tenant when the mall is not generating enough traffic."

The bigger picture here seems to be about Simon not having another empty spot in its malls. If the market were different, rents were rising, and occupancy rates were high, the company might be happy to have the opening to rent out at a higher price.

Winning this battle could discourage other retailers from trying their own closures when they have long-term leases in effect.