Folks don't typically associate Disney as a place for adults to get their drinks on. The resort's original Magic Kingdom park didn't even offer alcoholic beverages until the Be Our Guest restaurant opened in 2012. Epcot has never shied away from serving up potent beverages, but the annual festival tends to bring out the party animal lurking inside many of its visitors.

Disney shareholders don't mind. Disney's theme-park attendance has been sluggish for the second year in a row, and anything that the media giant can do to generate more turnstile clicks and revenue than the year before can only help. Let's go over a few of the things that this year's festival is doing to improve Disney's financial performance. 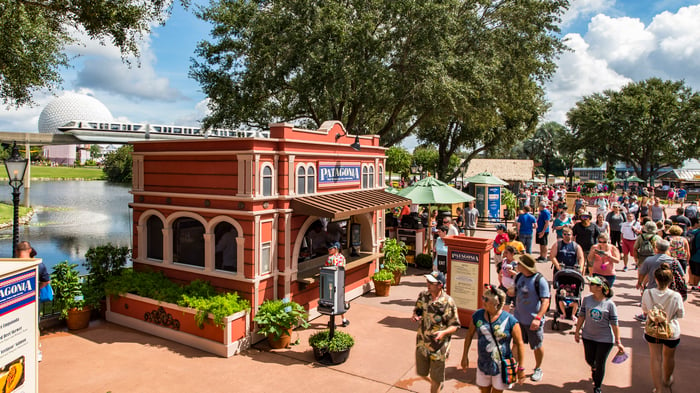 1. The festival is longer this year

Disney has been hosting the Food & Wine Festival every year since 1995, and the event gets longer with every passing year. The event will be a 75-day affair this year, up from 62 days last year and 53 days the year before that.

The fall festival keeps bleeding earlier into the summer season, something that should juice up its fiscal fourth-quarter results. There's always the risk that Disney outstretches the festival's elasticity. If it's the same number of total visitors spread out over more days Disney won't gain anything with the extension. The novelty may also wear thin. However, lines on peak weekend periods seemed as long as ever last year. You can't blame Disney World for trying.

2. The festival is thinking outside of the park box

The festival has blossomed over the years, going from a modest collection of international outposts across its World Showcase pavilion to setting up shop throughout Epcot. It's going beyond the turnstiles this year, hosting meals and seminars across its three monorail-accessible resort hotels.

Disney stunned investors by reporting a decline in occupied room nights during its fiscal second quarter. Hosting more events at its own hotels won't necessarily cause a spike in bookings. One has to hope that someone doesn't drink so much at an event that they book a room for the night. However, getting Epcot visitors to check out its resort offerings -- particularly its three high-end hotels that happen to be on the monorail line -- should help inspire future bookings.

3. Discounts are there for the taking

This is typically the time of year when Disney drums up seasonal promotions to get folks to visit its parks during the off-season, but it's being more aggressive than usual this time around with attendance flat or declining for the second calendar year in a row.

Annual passholders can bring family members and friends that will can buy one-day park-hopper tickets for $79, a big discount for a ticket that can cost as much as $142.50 this time of year. The tickets must be purchased at the park the same day they are used, and the offer is good only through the end of September.

Fall rates at Disney resorts have historically been discounted, and marked-down offers on tickets for Florida residents are standard this time of year. However, a new perk for those with annual passes is access to discounts as high as 30% -- through the end of September -- at select restaurants. Naturally guests coming for Food & Wine aren't going to be thinking about eating even more food, but the point here is that a hungry Disney is one that's good for deal seekers.

Shareholders may disagree with the notion that discounts are a good thing, but if it brings in more visitors that will be paying full price for their festival food and wine tastings, it will work wonders for Disney's top and bottom lines.