The company took its first big, bold step on its journey to democratize augmented reality by introducing its ARKit software development kit at its annual Worldwide Developers Conference in June. 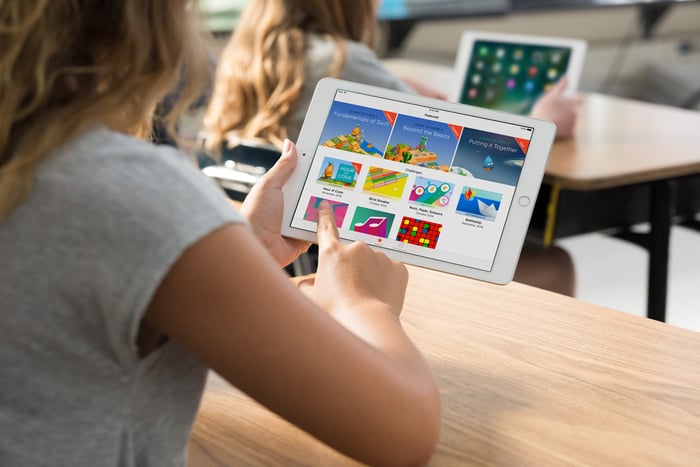 Since then, developers have managed to take the tools that Apple provided them to create some interesting, non-trivial experiences. On Aug. 29, Apple even showed off to the press examples of augmented reality applications developed by third parties using ARKit.

Let's assess the three technologies that will be critical to Apple's AR ambitions.

Apple has long taken the performance and efficiency of the graphics processors in its iOS-based devices very seriously. For years, the company was among the first, if not the first, to get its hands on new graphics processor intellectual property from Imagination Technologies (NASDAQOTH: IGNMF) to integrate into its custom-designed A-series applications processors.

Though I expect this year's iPhones to use Imagination's graphics processors, Apple has made it quite clear that its future A-series chips will contain Apple-designed graphics technology.

It's not a surprise that Apple wants control of this technology, especially as it turns its focus to AR applications. Many AR applications superimpose real-time 3D rendered objects onto the real world, and so the capabilities of the graphics processors in Apple's smartphones will directly influence developers' ability to deliver increasingly rich and vivid AR experiences.

Apple clearly wants to lead the AR revolution, and to do that, it's going to need to lead in real-time mobile-oriented graphics processing technology.

Another area that Apple has long taken seriously is display quality. Apple's current iPhone 7 and iPhone 7 Plus smartphones, though both are nearly a year old, have some of the best displays on the market, even managing to outmatch what one expert calls the "best performing smartphone display" in areas like color accuracy and, in some cases, brightness.

The quality of AR experiences will be directly affected not just by a device's ability to rapidly draw the right images, but by how faithfully and quickly the display can output those images.

To that end, I expect Apple to continue pushing its suppliers and its internal engineering teams to try to not just build best-in-class displays, but to build displays that deliver user experiences that no other smartphone vendor can match.

Finally, Apple has always been big on delivering great camera experiences. I expect Apple to double down on its camera technology -- both front-facing and rear-facing (though the latter will likely be more important) -- to make sure that its devices can capture the world around them properly.

After all, what good is a fast graphics processor that can render artificial elements super quickly coupled with a zippy, color-accurate display, if the world that's "augmented" is captured poorly?

Expect Apple to continue to push very hard to try to establish a clear leadership position in smartphone cameras.