Industrial products and equipment powerhouse Illinois Tool Works (NYSE:ITW) has reliably created shareholder value over the long term. The company has delivered record EPS year after year, has improved its operating margin every year since at least 2012, and its stock is trading near all-time highs. Its EPS grew 16% year over year in the second quarter. There's really not a whole lot shareholders can complain about.

Yet, while Illinois Tool Works has made undeniable progress on strengthening its business since the Great Recession, investors know that economic downturns happen periodically, and they usually aren't kind to infrastructure and industrial stocks. Which leads to the obvious question: How well can Illinois Tool Works weather the next downturn? The Great Recession was a market downturn for the ages, but the way in which Illinois Tool Works responded to it should give investors confidence about how it will weather the next one, especially given that it's unlikely to be as bad as the last.

In the last seven years or so, management has invested in the highest-margin growth opportunities while divesting non-core assets. Those moves have trimmed the company's global workforce from 59,000 at the end of 2009 to 50,000 at the end of June 2017, which has lowered expenses and boosted operating income despite shrinking revenue totals.

In 2013, Illinois Tool Works reported revenue of $14.1 billion and operating income of $2.54 billion. Last year, those totals changed to $13.6 billion and $3.06 billion, respectively -- a decline of 4% on the top line and growth of 20% on the bottom line over that period. Through the first half of 2017, the business is on pace to achieve annual operating income of at least $3.3 billion. 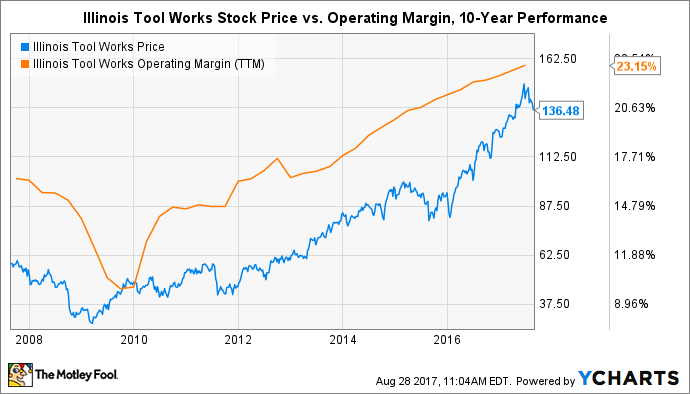 That puts the company on pretty solid footing for the next market downturn, whenever it hits. However, Illinois Tool Works feels pretty confident it won't be arriving anytime soon. Management increased its original full-year EPS guidance by 13% to a range of $6.32 to $6.52. Meanwhile, 2017 revenue is expected to reach at least $14.1 billion.

Obviously, revenue and earnings would drop during a recession, which would bring the stock price down, too. But is there anything investors should really worry about?

The improvements the company has made in operating margin and operating income certainly will help management respond to a market downturn. But that doesn't mean decisions will be easy, nor is everything as it appears.

For instance, while EPS grew 57% from 2013 to 2016, net income grew just 25% in that period. That's because Illinois Tool Works plowed an incredible $9.9 billion into share repurchases during those years, reducing the number of shares outstanding by 25%. If at some point the company has to slow its share repurchase pace, that could take a bite out of EPS and dividend growth, which were driven in no small part by the falling share count.

Perhaps of greater consequence to investors during the next downturn will be the balance sheet. The debt-to-assets ratio has risen from 25% in 2012 to 51% last year. Management prefers to focus on the debt-to-EBITDA ratio, and thinks a level of 2.2 times -- much higher than historical values -- is sustainable going forward. 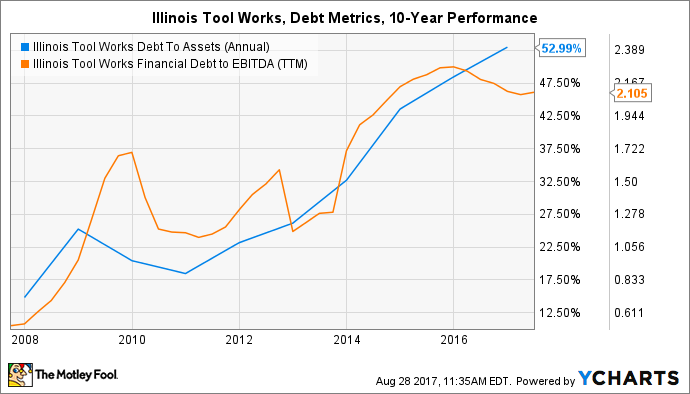 It may be right. After all, Illinois Tool Works has been able to acquire debt at favorable rates, and it's far from being in jeopardy of missing payments. There's a problem with using the debt-to-EBITDA ratio as a benchmark, however. A company can rack up debt during up cycles while earnings grow in lockstep. That's all well and good, but when economic downturns strike, earnings can fall precipitously. Debt levels don't. That would balloon the ratio management adheres to, and could affect the company's access to credit from its various lenders.

In that scenario, management might be forced to divert cash flow to debt payments. Where would it be diverted from? Well, it could be share repurchases, dividend payments or planned increases, or investments into the business. But cash flow will drop with earnings, which could make the decision about where to pull the funds from that much more stressful.

Can this stock handle the next slow down?

As far as industrial stocks go, Illinois Tool Works seems well-positioned to weather an economic downturn. The company may need to take serious measures to lower debt levels when the next one occurs (and may want to start doing so in 2018), but management could easily divert cash flow to repay debt before a crisis strikes. Otherwise, they will eventually need to make some difficult decisions.