Please ensure Javascript is enabled for purposes of website accessibility
Log In Help Join The Motley Fool
Free Article Join Over 1 Million Premium Members And Get More In-Depth Stock Guidance and Research
By Rich Duprey - Sep 3, 2017 at 11:00AM

The brewer dives further into craft beer, but the timing may not be good.

Constellation Brands (STZ -0.95%) just made its second craft beer acquisition, but probably won't begin buying up breweries to the same degree as Anheuser-Busch InBev (BUD -1.07%). Although the price paid also likely wasn't anywhere near the $1 billion it dropped on Ballast Point Brewing two years ago, it indicates the pace of craft brewery acquisitions might not abate anytime soon, and investors may not like the trend it portends.

The spirits, beer, and wine distributor purchased Florida-based craft brewer Funky Buddha Brewery for an undisclosed sum in early August, but noted it was both the largest microbrewery in south Florida by sales and volume as well as the fastest-growing craft beer in the state. At 54,000 square feet with a capacity of 45,000 barrels, Constellation says Funky Buddha is also Florida's busiest tap room by beer sales. 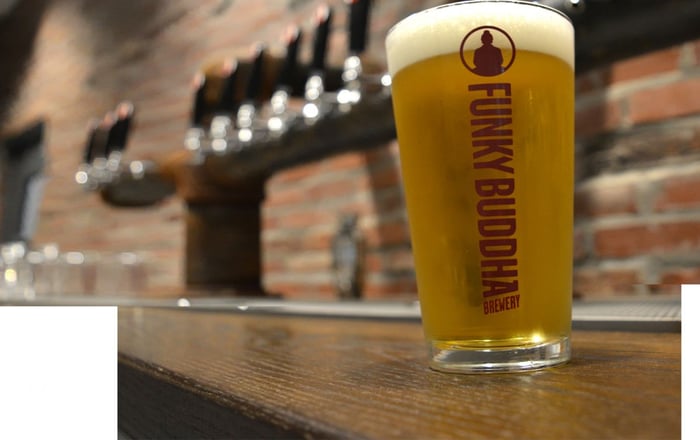 That ties in well with Constellation's acquisition of Ballast Point, which although much larger than Funky Buddha -- producing at the time of the purchase some 4 million cases a year, or about 290,000 barrels -- it was one of the fastest-growing craft brewers and it blended well into the ongoing trend of beer premiumization.

In fact, premiumization is occurring across almost all alcoholic beverages, and was partially the rationale behind Diageo's (DEO -1.63%) purchase of Casamigos, the high-end tequila brand owned by actor George Clooney. While many investors question the wisdom of paying $1 billion for a brand that has limited production and few global sales, Diageo is betting it can ride the trend higher.

So too with Constellation Brands, which said, "Adding a fantastic regional brand such as Funky Buddha to our craft beer portfolio, along with Ballast Point, advances our strategy in continuing to lead the high-end beer segment." As it did with Ballast Point, Constellation seemingly intends to leverage its market reach and distributor partnerships to grow the brand nationally.

Yet just as Diageo is beginning to hear rumblings of discontent among investors over its acquisition strategy, Constellation may face a backlash, and not just from craft beer purists upset about mega brewers buying up their smaller brethren. 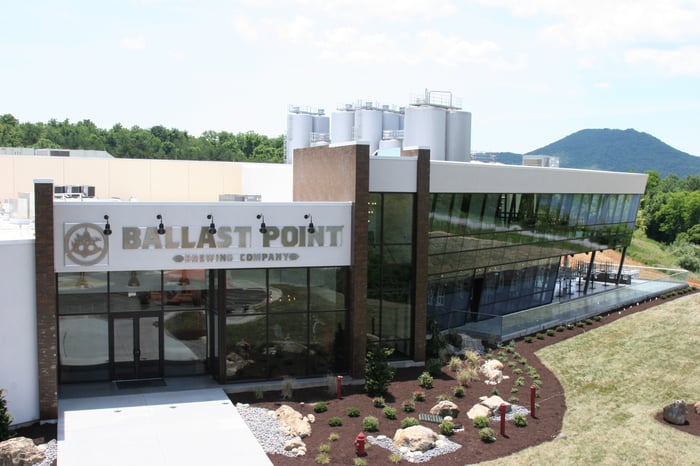 In Constellation's second-quarter earnings report, the brewer identified "negative trends" in the craft beer segment and in its Ballast Point business that led it to take an $86.8 million impairment charge on the value of the brewery's trademarks. The carrying value of Ballast Point's trademark's of $222.8 million was written down to a new lower fair market value of $136 million.

For a billion-dollar purchase, the amount isn't especially significant yet, but as the competitive pressure in craft beer mounts, the need to write down further value on its purchase will grow, and after $100 million here and $100 million there, soon we may be talking real money. In short, it's beginning to look like Constellation Brands overpaid for Ballast Point.

What's worrisome for investors, though, is Constellation looks to be, if not doubling down with its Funky Buddha purchase, raising the ante on craft beer, and it's doing it just as blowback from craft beer lovers is growing.

As debate swirls about the merit of megabrewer buyouts and craft brewer sellouts, Anheuser-Busch, Constellation Brands, and other big beer operators will find more people swearing off the brands purchased. Following A-B's purchase of Wicked Weed Brewing, for example, a raft of brewpubs dropped its beers from their taps, and craft beer festivals ended its participation and sponsorship.

And the craft beer industry's trade group Brewers Association is pushing the distinction between true craft beers and those that are mass craft by designing a label icon brewers can use to identify their beers as real craft.

The Funky Buddha purchase may be nominal, but it signals Constellation Brands is intent on fighting the growing tide against such acquisitions, and write-offs like the one it's begun taking with Ballast Point Brewing may soon become a more regular feature on its financial statements if the industry slowdown continues.