Please ensure Javascript is enabled for purposes of website accessibility
Log In Help Join The Motley Fool
Free Article Join Over 1 Million Premium Members And Get More In-Depth Stock Guidance and Research
By Matthew Cochrane - Sep 4, 2017 at 8:25AM

The company's small-business loan platform is exceeding expectations and growing at a dizzying pace.

Since Square (SQ -3.73%) reported its second-quarter earnings, its share price has basically stagnated, largely trading sideways the past month. Of course, this should be taken in the context of Square's past year, during which its stock price rocketed up more than 100%. Despite a tepid market reaction to the quarter, there was plenty for shareholders with a long-term focus to like about the company's results.

Square reported adjusted revenue of $240 million, a 41% increase year over year, and adjusted EBITDA of $36 million, an increase of $24 million from the prior year period. Square's take rate once again showed remarkable buoyancy despite a higher percentage of larger businesses as clients, primarily due to Square's subscription and services-based revenue. This category -- largely driven by Square Capital, Instant Deposit, and Caviar -- increased an amazing 99% year over year to $59 million. Yet out of all these lucrative platforms, it was Square Capital that the company's management most wanted to highlight. 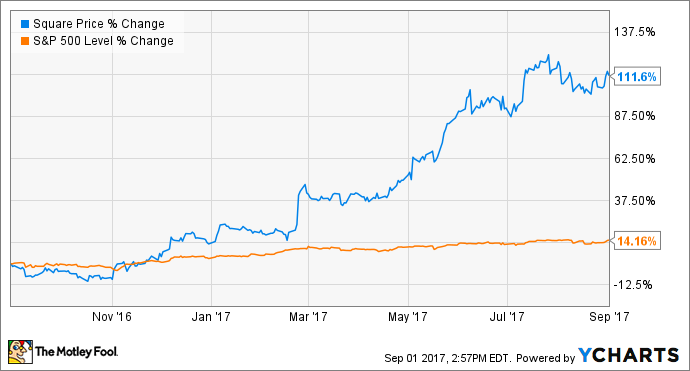 Square Capital is a loan platform for the company's vendors. In the second-quarter shareholder letter, management reported Square Capital extended $318 million across 49,000 business loans, a 68% increase year over year. This explosive growth demonstrates that Square has found a small business loan market underserved by banks and other financial institutions. The average loan size about $6,500.

Furthermore, management has found that participation in Square Capital increases the merchant's engagement across the entire Square ecosystem. Management stated that Square Capital borrowers "often" use other services offered by the company. This not only drives greater revenue per seller but also helps with customer retention, because the more Square services retailers utilize, the less likely they are to leave. 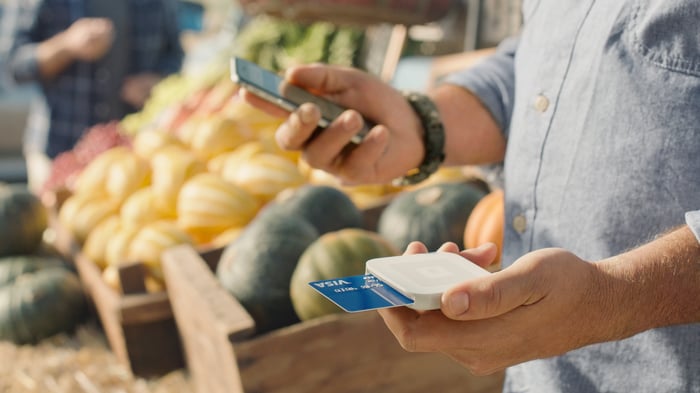 This quarter, Square also announced a new addition to its lending platform, Square Installments, a program that allows select Square merchants to extend credit to their customers. Square Installments is still in testing. During the earnings call, CEO Jack Dorsey explained the reasoning for the new offering:

In terms of the Installments, we have approached this from a seller perspective, and we're constantly looking for opportunities to give the seller a new way to serve their customer in a better way. And we have this idea around offering installments to sellers so that they can enable their customers to pay in chunks and installments ... it's just the start of us being able to do this for consumers, but it does -- it is grounded in the seller mindset and just making sure that we give our sellers a superpower that they can offer their customers. We've found that if we build for the customer of our customer, our customer benefits as well.

Again, if this allows Square's merchants to generate additional sales, that just helps drive top and bottom-line growth for the company going forward: a true win-win.

Is Square taking on too much credit risk?

Of course, the elephant in the room surrounding all the talk of loan growth is whether the company is taking on too much credit risk as it now loans money to not only its customers but to their customers as well. Square is not a typical lender, however, as evidenced by its remarkable loan loss rate, which has consistently hovered around 4%. Business loans typically default at nearly double that rate, according to WAIN Street's Business Default Index.

Square management believes much of the risk is mitigated by automating the loan process through machine learning and software algorithms. CFO Sarah Friar credited this process and said risk in Square Installments would be prudently managed in the same way:

So Square was born using, at the time, what we call, software algorithms. Now we talk about machine learning and even deep learning. We have clearly moved on that continuum, and those models help us to really manage the risk prudently. And the models get better and better as the cohorts mature and we get more and more data on that. So no change to the core business on loss rates. As we think about a new business like Installments, it's just business as usual, right? It's exactly the same approach of making sure that we're utilizing the data that we have.

The data Friar refers to are the insights Square has on its sellers' transaction and sales history. This gives Square a unique inside look at a business -- one that banks do not have. The automated process also adds to the ease of use for the platform. As Square's management said in the conference call, with a click of a button, the money can be in the merchant's bank account the next morning.

Loan loss rates are also undoubtedly low, because the way merchants pay back the loan is through tiny extra slices of each transaction processed through a Square terminal. In other words, a Square Capital loan will never be another bill sitting on a merchant's desk who is trying to prioritize bills to pay that month. Rather, the loan is paid back automatically as the merchant conducts business.

Finally, it should be mentioned that because Square has been able to maintain such a phenomenal loan loss rate, it has been able to sell many of these loans to third-party borrowers. For instance, the company announced the Canada Pension Plan Investment Board, an investment manager with over $300 billion in assets under management, as a new loan purchaser this quarter.

Square's unique position as a payment processor makes it an ideal loan issuer to its customers. It simultaneously lowers risk and drives revenue growth, as merchants can use the extra capital to grow their own businesses. Best of all, it increases the stickiness of Square's ecosystem, making it harder for merchants who have used the platform to abandon Square's payment processing services. For all of these reasons, Square shareholders should cheer the platform's growth even as they keep an eye on that loan loss rate.