More specifically, Toro's quarterly revenue climbed 4.5% year over year to $627.9 million, which translated to 22% growth in net earnings to $0.61 per share. Both figures marked new company records, with the latter well ahead of Toro's guidance for earnings of $0.56 per share. And analysts, on average, were looking for lower earnings of $0.57 per share on roughly the same revenue.

Let's take a closer look to determine whether the market's negative reaction was merited, and -- perhaps more important -- whether investors should be concerned. 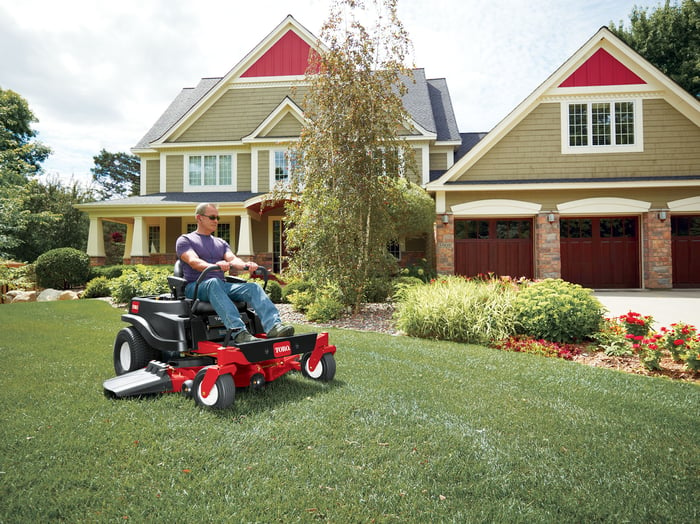 A tale of two segments

"We are pleased to deliver strong results for the quarter driven by positive momentum in our professional segment," added Toro CEO Richard Olson. "Innovative new offerings across our professional portfolio fueled the growth."

To be sure, Toro's professional segment saw net sales climb 9.5% year over year to $468.6 million, helped by the momentum of its landscape contractor, golf and grounds, and international businesses. But that strength was offset by a 9.3% decline in sales from Toro's smaller residential segment to $152.1 million.

That said, Toro's residential decline was caused by a combination of a shift in timing of its "Toro Days" sales promotion to the fiscal second quarter (it was held in April instead of May this year), and higher sales of its professional-grade zero-turn riding mowers to homeowners. To a lesser extent -- and perhaps a consequence of the latter -- Toro saw lower residential demand for its steering wheel zero-turn riding mowers.

On guidance and taxes

Moreover, Olson noted the company is "encouraged by the retail trends" it's seeing so far in the current fiscal fourth quarter, especially across several of its professional segments. Particularly ahead of the impending snow season, residential snow thrower sales have been strong so far, and new products from Toro's BOSS line leave it positioned to take advantage of growing demand from contractors.

As such, Toro increased its outlook for full fiscal-year earnings to be roughly $2.38 per share (up from $2.35 previously), and clarified its top-line guidance to call for full-year revenue to climb "at least 4.5%" (compared to verbiage for revenue growth "to be about 4.5%" previously) from fiscal 2016.

To be fair -- and though this shouldn't have been terribly surprising to analysts -- investors should note that Toro's outsized bottom-line growth can be partly credited to the company's adoption of new accounting standards for share-based compensation this fiscal year. Toro's effective tax rate was a lower-than-expected 22.6% last quarter, and 23.6% through the first nine months of the year, down from 38.9% and 30.5% in the same respective year-ago periods.

The slightly deceiving drop in its residential segment notwithstanding, Toro's overall business is still strong -- a position underscored by the fact that the stock is up more than 25% over the past year as of this writing even after its recent pullback.

So it seems the market was disappointed that Toro didn't deliver even more pronounced outperformance last quarter. But I also think that should be of little consequence to long-term investors, who can take solace knowing that Toro has continued to position itself to thrive and is enjoying favorable retail trends head into the end of the year. All things considered, for patient shareholders willing to hold the stock as those trends continue to play out, I think Toro's share price could still see a nice turn for the better after the dust settles.