These key metrics point toward a challenging future for the Tex-Mex chain.

From 2011 through 2016, Tex-Mex chain Chuy's Holdings (CHUY -2.57%) was a steady growth machine, increasing both its revenue and its restaurant base at compound annual growth rates of more than 20%. But then the so-called "restaurant recession" -- caused by declining customer traffic and what many believe is an oversupply of restaurant choices -- helped send chains like Logan's Roadhouse and holding company Ignite Restaurant Group into bankruptcy.

The trend of fewer people dining out started to weigh on Chuy's results in late 2016 as well. And now, after three consecutive quarters of negative comparable restaurant sales growth, investors have largely abandoned the stock, with shares trading near their all-time lows. How do Chuy's recent results and forward guidance look in the context of its long-term track record? Let's just say it's not a pretty picture. 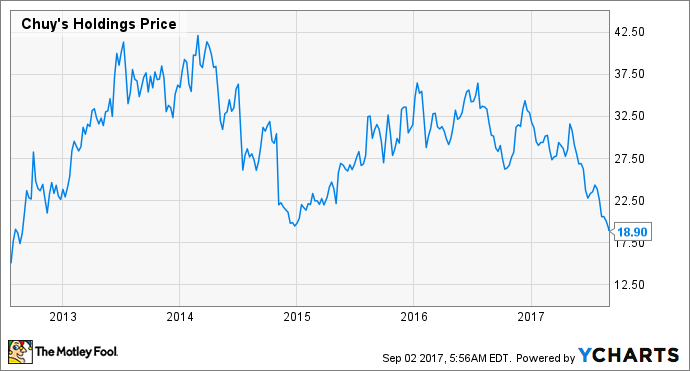 Comps aren't likely to be positive this year

Restaurants have two options for revenue growth. They can either open new restaurants or increase sales at existing ones. For many years, Chuy's did both of these things very well, and at one point was riding a streak of 25 straight quarters of comparable restaurant sales growth. However, comps turned negative in the fourth quarter of 2016 and due to continuing traffic declines, haven't seen any kind of recovery yet. This led management to recently reduce its full-year comps guidance to a range of negative 1.5% to positive 0.5%. At the midpoint, that would be Chuy's lowest ever yearly comps performance as a public company. Are there any bright spots? In general, the company's traffic slump hasn't been as severe as the industry average, and the year-over-year comparisons should begin to get a little bit easier as Chuy's laps the weaker numbers from the back half of 2016. It should also be noted that there is room in Chuy's guidance for a rebound to positive 2017 comps.

But I wouldn't count on it. There are signs that the environment for restaurants is still worsening, with industry same-store sales down 2.8% and traffic down 4.7% in July. And many analysts have soured on the sector, with Andy Barish, managing director at Jefferies, noting in July that "We believe the industry has at least 18 months of challenges ahead in terms of softer same-store sales and higher labor costs because of capacity growth and labor tightness."

Store-level margins are feeling the pressure

At the restaurant level, Chuy's has managed to generate fairly consistent profits, with store-level operating margin of 19% or above in four of the last five years. However, the combination of lower comps and rising expenses -- especially labor costs -- have put margins under pressure recently. 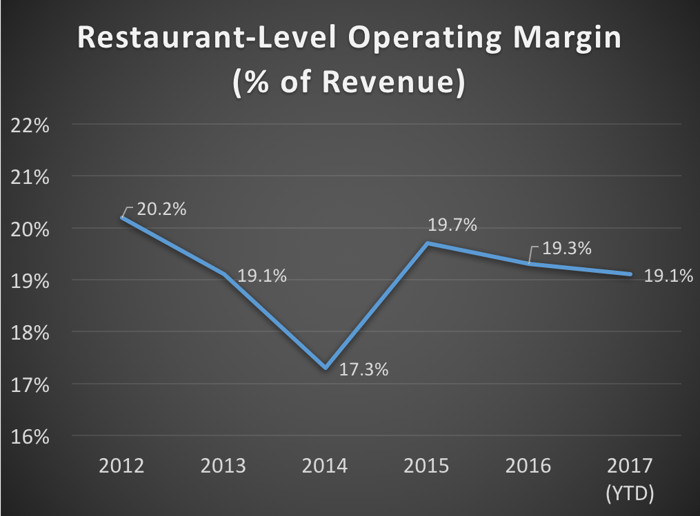 The last two quarters have seen year-over-year margins shrink due to labor inflation, higher occupancy costs for stores in larger markets, and -- due to the large number of new stores opened in the last couple of years -- the dreaded "new restaurant inefficiencies". As it tries to standardize margins across its store base, Chuy's recently created a four-tier menu pricing system, which helps compensate for locations facing higher expenses. And so far, with first and second quarter restaurant-level margin coming in at 19.1%, the company is still well above its target range of 15% to 16.5%. However, Chuy's expects continued inflation for wages and food costs for the remainder of 2017, and occupancy costs will keep climbing as the company adds more stores in pricier markets like Chicago, Miami, and Denver.

New restaurant growth is cooling off

Chuy's has been aggressively opening new restaurants for years, expanding from just 39 locations in 2012 to 80 at the end of 2016. Even as the company has gotten larger and the rate of annual growth has slowed, management had repeatedly stated that Chuy's would continue to increase its store base at annual rates of 15% to 20%. That all changed on Chuy's last earnings call. Due to the recent string of disappointing traffic and comps, the company says it's cutting its growth plans. While Chuy's will open 12 new units this year -- which still represents 15% annual store growth -- next year the company will open between 8 and 12 new locations. At the midpoint, that represents just 10.9% annual store growth in 2018. For a company that talks often about doubling its number of locations every three to five years, that pace of expansion is clearly not going to cut it.

Chuy's isn't alone in suffering from this extended industry slowdown. And based on management's guidance for comps and store growth, it doesn't appear things will be turning around anytime soon. Chuy's did speak on its last earnings call about exploring other ways to create shareholder value -- implying some kind of buyback or special dividend -- but so far, nothing has been announced. Especially in light of the company's decelerating expansion efforts, incentivizing investors to ride out what looks like a tough 2017 may be a smart move.