Exchange-traded funds can be an excellent way to build retirement wealth. With a single investment they offer investors the opportunity to diversify within the fund's scope, and the ability to buy or sell holdings whenever the market is open. And they typically operate with low costs. 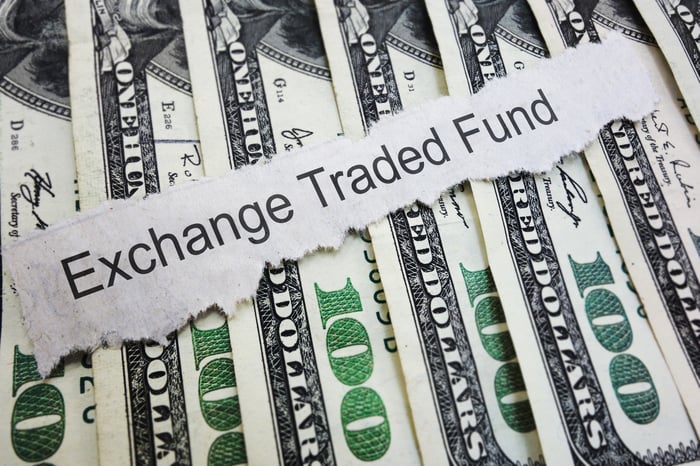 If you don't know which stocks to buy but know that investing in stocks is a great way to build wealth, consider buying them all -- or at least a huge cross-section of them. The Vanguard Total World Stock ETF (NYSEMKT:VT) holds over 7,700 stocks from nearly 50 different countries around the world. While it doesn't hold every publicly traded company on Earth, it does attempt to track an index that stretches across markets and company sizes.

With an expense ratio of 0.11%, the Vanguard Total World Stock ETF offers very low-cost access to stocks from around the world. If there's a downside to this ETF, it's that it is something of a U.S.-centric way to get exposure to global stocks: Nine of its top ten holdings are U.S. large-cap companies, and over half of its total value is in U.S. companies, because it is weighted by market capitalization.

Thanks to a nearly invisible 0.04% expense ratio, the Vanguard Total Market ETF enables you to get broad diversification within the U.S. market at a very low cost of ownership. If there's a downside to this ETF, it's that as a market-cap-weighted fund, it's heavily tilted toward large U.S.-based companies. Indeed, many of the top holdings in the Vanguard Total Market ETF are the same top holdings as in the Vanguard Total World Stock ETF. That limits the diversification benefit of owning both those ETFs together, though either one would have merit on its own.

As great as those broad index funds are, they're limited by being weighted by market capitalization and focused on the total market. As a result, their overall results are heavily influenced by the performance of the largest companies. If a few really big businesses stumble, those funds can get hit disproportionately hard, even if the other companies in the index are doing OK.

That makes the Vanguard Small-Cap ETF (NYSEMKT:VB) another ETF worth considering when it comes to building retirement wealth, as well a great supplement to either of the other ETFs mentioned. The Vanguard Small-Cap ETF focuses on smaller publicly traded U.S.-based companies, with the largest company in its portfolio weighing in at a market capitalization of around $11 billion. That's a tiny fraction of the more than $800 billion market cap of the largest company held by the other two funds.

Small-cap stocks have better opportunities for growth relative to their sizes than their larger compatriots do. That gives the Vanguard Small-Cap ETF opportunity for stronger returns over time than funds focused on larger companies. As with any other investment, however, there are risks involved. For instance, small-cap companies frequently have fewer financial resources than larger ones do, making them more vulnerable in financial downturns.

Still, with an expense ratio of only 0.06%, the Vanguard Small-Cap ETF gives you a low-cost way to diversify in a potentially market-beating strategy. That makes it a great ETF to consider for your toolbox when you're building your retirement wealth.