The perennial underperformer is experiencing a particularly difficult year. Should value investors place Campbell Soup Company on their watch lists?

Among multinational consumer packaged goods (CPG) corporations, Campbell Soup Company (CPB 1.02%) has counted as a laggard for a surprisingly long time. The company's 82% total return over the last 10 years is roughly half the 171% total return of the Consumer Staples Select Sector Fund, an ETF based on an index of S&P 500 consumer staples stocks (of which Campbell Soup is a member).

Lately, the company's woes seem even more pronounced: The stock is down 20% year to date, with half of the deterioration occurring last month, when management forecast another 12 months of flat to negative revenue growth in the new fiscal year, which began on July 31. It's not unreasonable to think that Campbell's shares might now be cheap. In this two-part article series, I'll look at the forces bearing down on the company's stock price, and whether patient bargain seekers should hazard a position.

An industry in flux

[T]he seismic shifts we've described in the past continue to alter the consumer, food and retail landscapes. These disruptions include shifting demographics, changing consumer preferences for food with a focus on fresh and health and well-being, and increased snacking behavior; a range of socioeconomic forces and technology advancements that are reshaping the consumer shopping experience.

Of the disruptions Morrison mentions, the evolving consumer shopping experience, in the form of new grocery ordering patterns, is one of the most pressing. Orders placed from computers and mobile devices, for later pickup or delivery, bypass the traditional in-store promotions which CPGs use to drive volume.

Per a joint study by the Food Marketing Institute and information measurement company Nielsen released earlier this year, the industry share of online grocery shopping could reach 20% by 2025, which would equal $100 billion in annual customer sales. CPGs must find ways to stay relevant within this increasing customer disconnect from the physical grocery store.

Compounding issues for Campbell, consumers are simultaneously turning to healthier food choices. The company has tried to work within this trend over the last few years, by removing the chemical BPA from the lining of its soup cans and acquiring smaller competitors with natural food credentials. Most recently in July, Campbell agreed to acquire organic soup manufacturer Pacific Foods of Oregon for over $700 million. 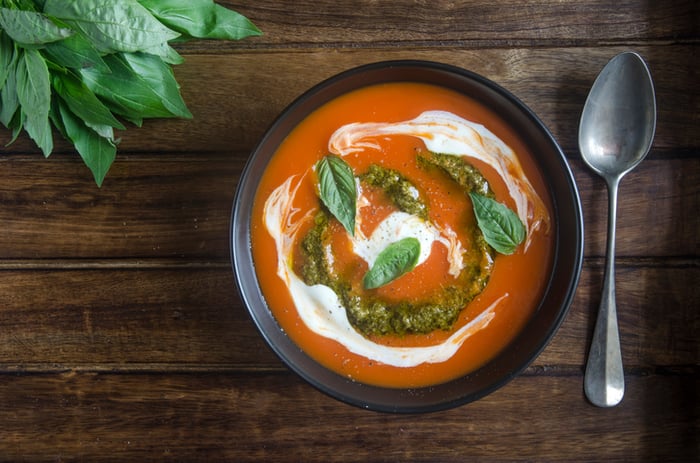 Earnings woes result directly from these trends -- and operational missteps

The company's most recent quarter is illustrative of the challenges discussed above. Campbell's largest segment, Americas Simple Meals and Beverages, posted a 3% segment revenue decline to $815 million, which was paced by a 4% decline in soup sales and weak V8 beverage sales. Its Campbell Fresh segment, specifically organized to take advantage of contemporary consumption trends, managed merely a 1% revenue gain. Worse, the Fresh business has been plagued by execution issues: Segment earnings swung from $8 million a year ago to a loss of $8 million last quarter.

During Campbell's earnings conference call on Aug. 31, Morrison noted that one of the company's major retail partners had opted not to move forward with a regular store promotion for Campbell soup in the new fiscal year, which began on July 31. This will impact the company in the first half of the fiscal year during the fall and winter months -- prime soup season. Management declined to guess at the retail customer's motivations, but investors will worry over what this means within a generally soft sales environment for Campbell's soup offerings.

Of course, points of optimism can still be found in the business. Global Biscuits and Snacks, Campbell's second-largest segment, reported flat revenue in Q4 2017 but is running quite efficiently, and contributed the lion's share of the company's 7% jump in fourth-quarter operating earnings. And Campbell still owns several promising product lines, including its Pepperidge Farm snacks, which have extended market share through continuous innovation in brands like kid-friendly Goldfish crackers.

Lackluster revenue and earnings growth, plus shares' swoon this year, have pushed Campbell's valuation well below its direct competitors by most earnings-based measures.

To illustrate, let's use the forward EV to EBITDA ratio, which compares a company's enterprise value to its projected one-year EBITDA: 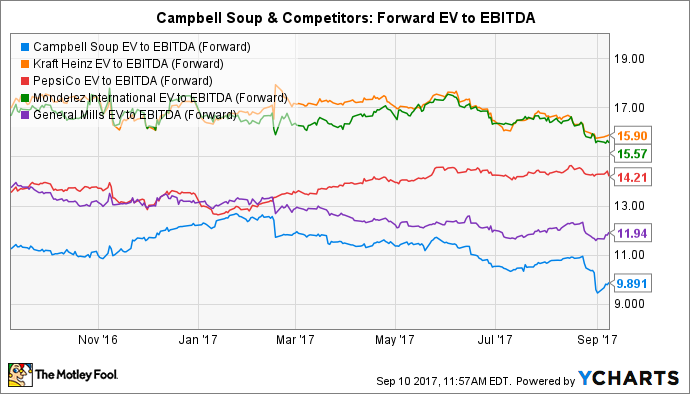 Campbell trades at a significant discount to most of its peers when the yardstick is price (as represented by enterprise value) to earnings (in the form of EBITDA). Is a single persuasive stock chart the rationale you need to click "Buy" on these shares? Not quite. To determine whether Campbell Soup Company is a bargain or a stock to avoid for now, you should dig just a bit deeper, and I'll do so in the second of this two-part article series.