Dividend ETFs can be extremely lucrative for income investors, and the Vanguard High Dividend Yield ETF (NYSEMKT:VYM) has provided its investors with exposure to a host of dividend stocks with above-average yields. Unfortunately, the ETF hasn't been able to match the performance of the broader market so far this year, due in part to some large fund holdings that have lost ground. Yet a few key stocks have helped keep Vanguard High Dividend Yield from suffering overall declines. Below, we'll look at how key contributors Boeing (NYSE:BA), McDonald's (NYSE:MCD), and AbbVie (NYSE:ABBV) have helped the ETF's performance, and whether they can keep doing so going forward. 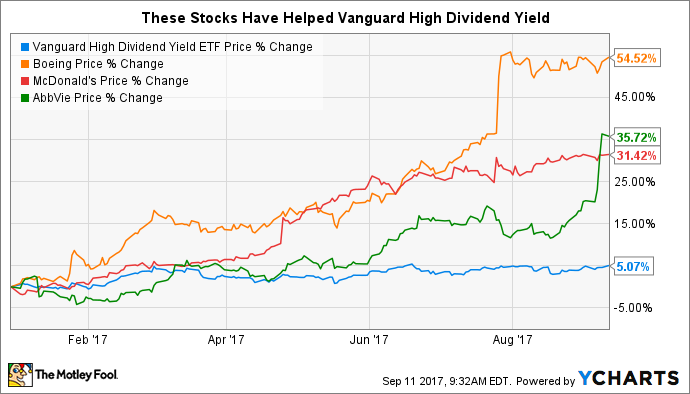 Boeing has done extremely well this year, seeing its stock rise by more than half from its level at the beginning of the year. The stock is a top-20 holding for Vanguard High Dividend Yield, with about 1.5% of the fund's assets invested in the aerospace giant. Industrial stocks have contributed strongly to the Vanguard dividend ETF's performance, with a 12% weighting representing about 50% more what the ETF's large-cap benchmark typically allocates to the sector.

The aerospace industry is still booming, and Boeing has seen positive results recently. The company enjoyed a huge boost in free cash flow in its most recent quarter, and even though revenue fell due to a natural ebb in commercial aircraft deliveries, improving efficiency has made Boeing more profitable. Looking ahead, Boeing expects strength for the remainder of the year, and nearly half a trillion dollars in order backlogs point to good times for the aerospace giant for the foreseeable future. Even with Boeing's soaring share price, its dividend is still strong with a 2.4% yield, and that has allowed ETF investors to get a piece of its strong returns.

One advantage of Vanguard High Dividend Yield is the diversity of its holdings. The fund has about a 1.34% position in fast-food giant McDonald's, which is enough to get the restaurant chain just into the top 20 holdings. Consumer defensive names play a key role in the Vanguard dividend ETF, making up about 14% of the portfolio and carrying about a one-half overweight compared to the fund's large-cap benchmark.

McDonald's has reinvented itself in recent years, working to make its offerings appealing to the broadest possible set of customers. The relaunch of the McCafe line has underscored the importance of premium coffee drinks to the fast-food specialist, and efforts to make those products available in grocery stores could lead to greater restaurant traffic as well. In conjunction with its expansion of breakfast availability, McDonald's is being smart about its customer experience and is reaping the rewards. Shareholders who've owned positions during McDonald's 41-year streak of raising dividends know quite well just how willing the company is to share its success.

Finally, drugmaker AbbVie is a top-25 holding in Vanguard High Dividend Yield, with about a 1.2% weighting in the fund. The pharmaceutical company is just one of many healthcare holdings for the Vanguard dividend ETF; they add up to about a 13% allocation to healthcare overall.

AbbVie brings a combination of well-established drugs and potential future blockbusters to the table. The company's Humira autoimmune disease fighter remains its most important compound, but AbbVie's pipeline includes key players in the cancer space, as well as further advances against autoimmune disorders. Competition abounds, but a 44-year streak of rising dividends gives AbbVie the staying power it needs to be part of the Vanguard High Dividend Yield lineup.

Investors in Vanguard High Dividend Yield are used to dealing with the volatility of its individual holdings, but in the long run, they count on favorable performance from its winners to outpace any drag from its losers. With AbbVie, McDonald's, and Boeing having more room for growth, the three stocks could be invaluable in supporting the ETF's long-term returns in the future.