Electronic Arts (NASDAQ:EA) has been riding momentum in the broader video-game industry and benefiting from efforts to improve the quality of its output that kicked off under CEO Andrew Wilson in 2013. Shares are up more than 740% over the past five years, thanks to a string of impressive earnings performances and the promising outlook for the business. Here's a look at some of the key earnings figures from last quarter:

Read on for three key quotes from the company's most recent earnings presentation and a deeper look at what's been driving the publisher's incredible success. 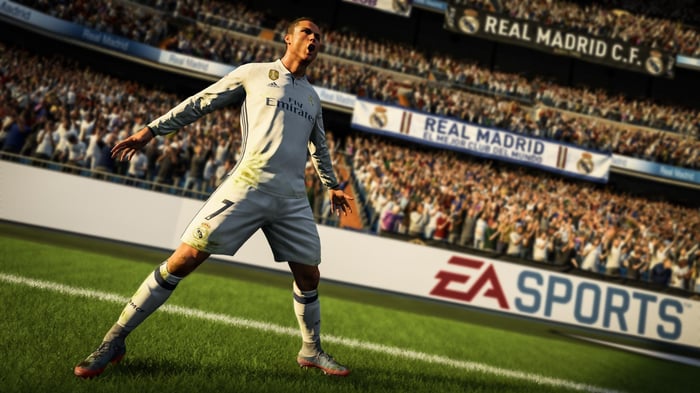 Much to the chagrin of retail outlets such as GameStop, video-game fans are increasingly buying titles direct from publishers as digital downloads. This shift not only allows Electronic Arts to keep a cut of sales that would otherwise go to retailers, but it also eliminates expenses related to manufacturing and shipping physical copies of games -- leading to substantially better margins on each unit sold.

Thirty-four percent of the company's game sales on PlayStation 4 and Xbox One came from digital channels in its June-ended quarter -- up from 27% in the prior-year period. Looking ahead, the company expects that 40% of its unit sales will come from digital by the end of the year and that this share can climb above 60% in the not-too-distant future. Here's Chief Financial Officer Blake Jorgensen discussing consumer receptivity and explaining the biggest challenges to getting digital sales to the next level:

While there's high-bandwidth speeds in the United States and in key major countries like the U.K. or France or Germany, that's not consistent all through Europe or Eastern Europe or Asia. And so that's probably still the biggest impediment to full game downloads. And the second piece is, while we in the U.S. and I think it's the same in Northern Europe and in some parts of Europe, the cashless credit or cashless transaction methods are fairly well developed. I would say they're not as well developed in other places in the world. So the use of credit cards, PayPal, any type of e-pay approach has still got a long way to go.

And I would say those two things are the biggest impediments to full game downloads. We know that the consumer, once they do a full game download, realizes how easy it is and how effective it is for managing their games. And so we don't see consumer resistance.

Software sales in the video-game industry have historically been front-loaded, with a title's first month in release being by far its most important sales period. While having a strong debut is still very important to a title's success, rapid growth for in-game purchases over the past five years has made keeping players engaged past the initial sale crucial to overall performance. Here's EA CEO Andrew Wilson breaking down some of the company's recent wins on the engagement front:

Ultimate Team -- a card-game mode that the company includes with its sports games and is branching to other franchises, including Star Wars Battlefront -- generated roughly $800 million in sales last fiscal year and is a good microcosm for the benefits that big publishers such as Electronic Arts are reaping from digital-content sales. Like other downloadable expansions, creating Ultimate Team content is substantially less costly than developing entirely new, large-scale games, and the popularity of these products is having a tremendous impact on EA's profitability. By improving player engagement through improved quality of product, in-game special events, and other measures, the company has ongoing opportunities to grow these high-margin digital content sales.

Electronic Arts has been making considerable strides in improving its development cycles, and these advancements are translating to improved top- and bottom-line performance. Here, Wilson outlines some of the ways the company has been getting better at creating games:

EA's investments in engine technology, analytics, infrastructure, and research continue to fuel advancements in our games, our services, and our player network. Our industry-leading Frostbite engine is now powering development of a dozen new titles across our portfolio. It is continually engineered alongside our world-class technology platform for games and services, enabling our creative teams to leverage sophisticated data and insights to conceptualize and build the most incredible new experiences for our players.

Having a versatile development engine like Frostbite helps to speed development and keep costs down. To use an analogy, having to create a new engine for each game is kind of like constructing a building and having to fashion your own bricks and other materials, while having an engine to work with is like having many of the important elements pre-fashioned. EA has been seeing similar benefits from having a shared digital platform for its games that streamlines features including multiplayer and delivering updates for its titles -- creating a holistic development structure that should help the company continue to deliver impressive results.