In the business world, there's no matchup that can quite equal that of Coke (NYSE:KO) versus Pepsi (NASDAQ:PEP). Beyond the Super Bowl commercials and competing promotional sets, this battle for your cola dollars has been one of the most heated for decades.

The good thing for investors is that both Coke and Pepsi have generated solid returns for investors -- averaging 12% returns per year for the last three decades. That far outpaces the market writ large. 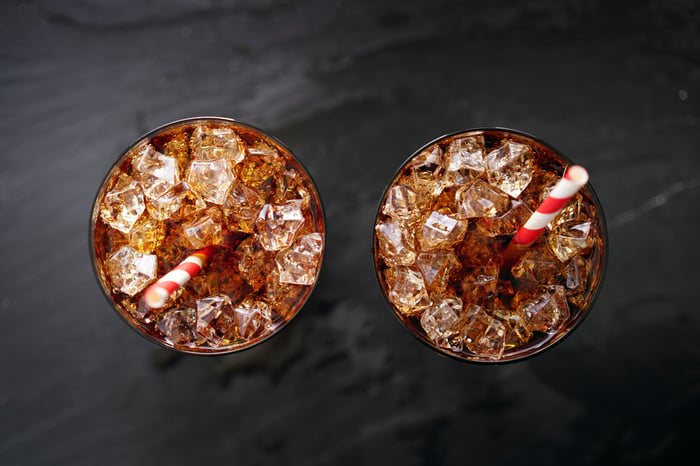 But which is the better buy at today's prices? That's not a question that we can answer with 100% certainty. But we can delve deeper into the matter by evaluating each company on three different facets -- and make a more informed decision as a result. Here's how they stack up.

Selling sugar water is a funny thing: Just about anyone can do it. So why would one company be able to hold a commanding lead over everyone else in the industry? The answer is the value of the brand.

In the food and drink world, the only real sustainable competitive advantage -- or "moat" -- is provided by brand strength. When consumers are familiar and comfortable with a brand, they're willing to pay slightly more for that company's products. That slight markup leads both to compounding returns over time and diminished influence of potential rivals.

Coke and Pepsi are both much more than their namesake brands.

Coke also includes Powerade, Sprite, Vitamin Water, Fanta, and Dasani water, among others. According to Forbes, Coke's brand is the fifth-most valuable in the world, worth over $55 billion alone.

Pepsi, on the other hand, has other drinks on its roster -- Gatorade, Aquafina, Mountain Dew, and Tropicana, to name a few -- as well as snacks like Quaker Oats, Doritos, and Fritos. On the same Forbes list, Pepsi comes in at 30th globally, with brand value of just over $18 billion. Frito-Lay, a subsidiary of Pepsi, comes in a respectable 40th globally, worth over $13 billion.

But taken together, the advantage still rests with Coke's brand.

Most investors in both Pepsi and Coke are counting on dividends to drive future returns. Because inputs are relatively low-cost and the companies enjoy decent margins because of their brand values, there's lots of cash flowing in.

It would make sense, then, to hope that management pays most of that cash out in the form of dividends. But that's not necessarily the wisest path to take.

Indeed, there's something to be said for keeping a healthy stash of cash on hand. Every company -- at one point or another -- will face difficult economic times. Those who enter such times with lots of cash on hand have options -- buy back shares on the cheap, acquire the competition, or drive them out of business by lowering your prices to levels that they can't.

Debt-heavy players are in the opposite boat, forced to narrow their focus just to make ends meet.

Knowing that Coke is valued -- via its market capitalization -- at a 20% premium to Pepsi, here's how the two stack up.

While the companies are about the same in terms of the amount of cash coming in, there's a clear winner when it comes to cash vs. debt: Coke.

While Pepsi's leverage is nothing to worry about given the company's cash flow, it seems clear to me that Coke would have more options to strengthen its place in the market in the face of an economic downturn than Pepsi.

And then we have the can of worms that is valuation. There's no one metric that can tell you just how expensive a stock is. Instead, I like to use a number of data points to get a more holistic picture.

Here we have a clear winner. On virtually every category, Pepsi is the cheaper choice. While the company's dividend yield isn't quite what Coke is offering, its payout is much healthier: Pepsi only used 66% of free cash flow over the past 12 months to pay its dividend. Coke, on the other hand, used 97% -- meaning that its sustainability may come into question if its numbers don't improve soon.

So there you have it: Pepsi is cheaper right now, but Coke's brand strength and cash hoard make it the better long-term choice in my opinion. To be honest, however, I'm not invested in either. With more than 30 years until my retirement, and an overall trend away from drinking soda, I think there are better places for your money, like the 10 stocks we've listed below.