Shares of Target (NYSE:TGT) shares have fallen 20% this year due to the retailer's sluggish sales growth, tough competition from e-commerce rivals, and concerns about its turnaround plans. But Target still looks intriguing at its current price, so let's take a moment to examine three reasons to buy and three reasons to sell the stock.

First, Target is very cheap relative to its industry peers. It trades at just 12 times trailing earnings, which is much lower than the industry average of 19 for discount stores. Its forward P/E of 13, while indicative of a future decline in earnings, also looks cheap. 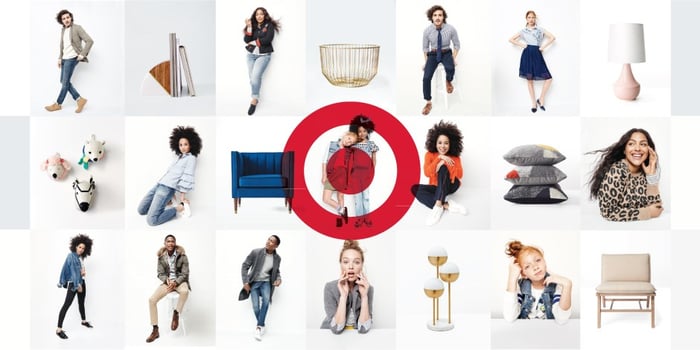 Second, Target pays a forward dividend yield of 4.3%, and it's raised that payout annually for 49 straight years. Target spent 48% of its earnings and 28% of its free cash flow on those dividends over the past 12 months, so it has plenty of room for future hikes. Target's free cash flow growth is somewhat volatile, but remains in an uptrend over the past several years. 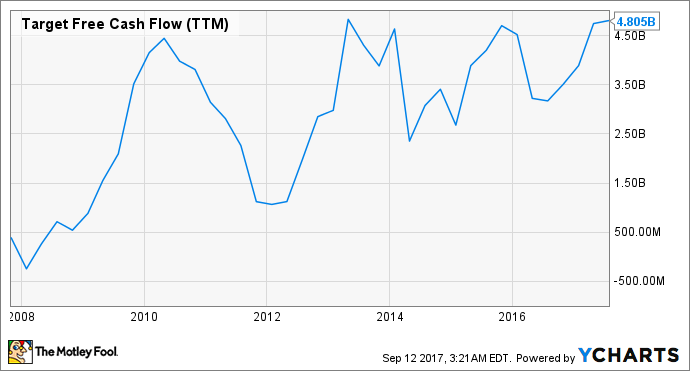 Lastly, Target has plans to boost its growth again. It's renovating its stores, increasing the number of small-format stores in denser neighborhoods, and investing more heavily in digital channels. Target's digital sales rose 32% annually last quarter, compared to 16% growth in the prior year quarter. It also slashed prices on thousands of items to counter Wal-Mart (NYSE:WMT) and Amazon (NASDAQ:AMZN).

Food and beverage revenues generated 21% of Target's revenues during the first half of 2017, which remains unchanged from the previous year. This leaves Target heavily exposed to Amazon's game-changing acquisition of Whole Foods, which immediately reduced prices at the premium grocer while integrating its stores into Amazon's Prime ecosystem. This means Target's grocery comps could slide a lot more in the future. 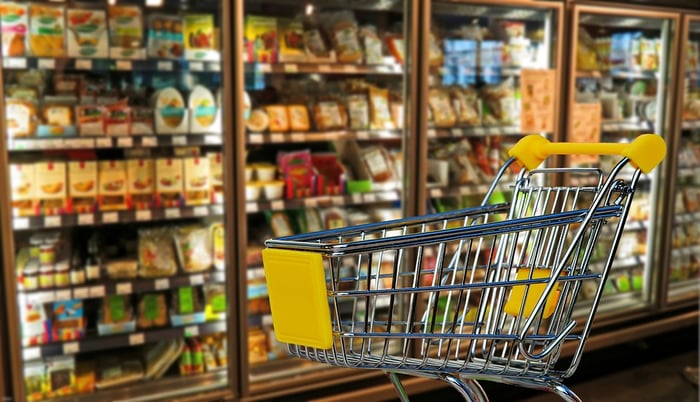 Another major challenge is that Wal-Mart has about 2.5 times as many stores as Target in the US. That superior scale makes it easier for Wal-Mart to charge lower prices and fulfill more online orders via deliveries and in-store pickups. Target is investing heavily in its digital channels to keep pace, but those expenses -- along with the price reductions on its products -- are weighing down its margins. That's why analysts expect its earnings to fall 10% this year.

Target's third weakness is its fragile reputation among shoppers, particularly in conservative areas. The company's decision to welcome transgender shoppers to use the bathroom of their choice -- which was originally posted on the company blog without the approval of CEO Brian Cornell -- sparked a fierce boycott which caused its store traffic and comps growth to slide. Cornell subsequently defended the idea and the controversy faded, but the risk of Target stepping on another political landmine remains high.

My decision: Avoid Target for now

Target's low valuation and high yield look tempting, but I think it's positioned poorly in today's rapidly evolving retail sector. On the superstore front, Wal-Mart could overwhelm it with its superior scale and more evolved e-commerce initiatives. On the grocery and e-commerce fronts, it faces the combined wrath of Amazon and Whole Foods.

Target's positive sales growth is encouraging, but we should really be watching its bottom line -- and those numbers won't improve anytime soon. Therefore, I believe investors should stick with either Wal-Mart or Amazon, and see if Target can withstand the incoming headwinds before buying any shares.