Please ensure Javascript is enabled for purposes of website accessibility
Log In Help Join The Motley Fool
Free Article Join Over 1 Million Premium Members And Get More In-Depth Stock Guidance and Research
By Travis Hoium - Sep 15, 2017 at 7:17AM

Plug Power gets all of the media's attention for its huge supply agreements with Walmart and Amazon, but it's Ballard Power Systems who is much closer to making money in fuel cells.

Plug Power (PLUG 3.68%) has been a hot stock on the market for nearly four years, but it has never quite lived up to investors' lofty expectations. Revenue growth has been easy to come by as big customers like Walmart and Amazon find value in the company's products. But Plug Power hasn't turned those deals into profits and is giving away shares to its customers to get a deal done, which will end up reducing current investors' upside if the agreements are successful.

If you like Plug Power for its fuel cell potential, Ballard Power Systems Inc. (BLDP 1.75%) may actually be a better play. It has much better financials and some of the same end markets as Plug Power. And it isn't giving the company away to make sales.

Ballard isn't burning all of its cash

The biggest flaw at Plug Power over the past four years has been its enormous cash burn. The company has lost tens of millions of dollars on its operations, and net losses can be counted in the hundreds of millions. You can see below that Ballard Power Systems isn't making money, but it's in a much better financial position. And it has grown more as well. 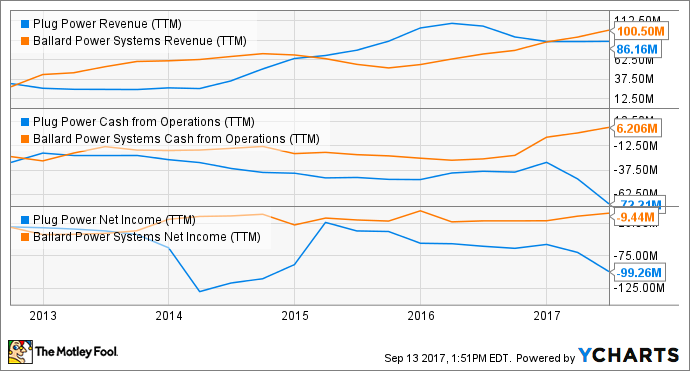 For years, Plug Power has teased investors with huge contracts to sell its products, and for years, its financials have lagged Ballard Power Systems. Plug Power needs to prove it can make money to get my investment dollars. So far, it hasn't.

A diverse business versus a one-trick pony

Ballard Power Systems has sales and partnerships with companies who make buses, trains, trucks, forklifts, drone makers, and even major automakers. It has a diverse pipeline of products as a result, despite the fact that over half of its revenue last year came from just three customers.

Plug Power's business is becoming increasingly reliant on Walmart, which accounted for 34.1% of its business in 2016. As the Amazon deal ramps, the two retailers will likely account for well over half of Plug Power's revenue. That's not a diverse customer base, and since forklifts are the main product being served, it's not a diverse set of products Plug Power is supplying.

If Plug Power is losing money constantly, how does it manage to stay in business? It keeps going to investors with its pockets turned out. You can see below that in the last five years, the number of shares outstanding has gone up nearly 6 times. Ballard's share count is up as well, but the dilution investors will see is far smaller because the company is closer to profitability. 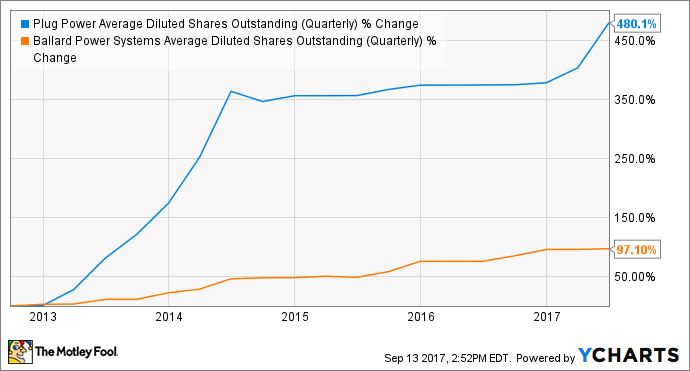 Investors interested in getting into the fuel cell business should really look at Ballard Power Systems over Plug Power. It doesn't get as much attention, but it has far superior financials and a diverse pipeline of products in development. If fuel cells take off, I think Ballard is set to profit handsomely.