If history is our guide, then policy demand and premium pricing strength following Hurricanes Harvey and Irma could make it the perfect time to buy shares in property and casualty insurer Travelers Companies, Inc. (NYSE:TRV) 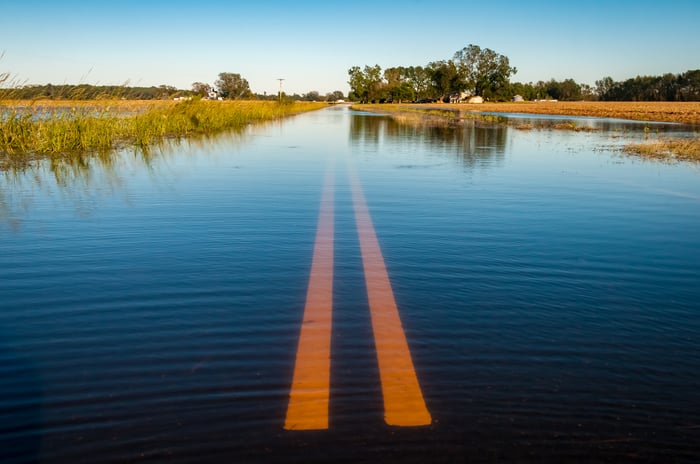 This year, Travelers has collected 5% more in premium revenue year over year through June, but its net income is down due to an increase in the company's combined ratio, or percentage of premiums spent on claims and expenses, to 96.7% from 92.7% last year.

With claims about to surge because of Hurricanes Harvey and Irma, the combined ratio could eclipse 100% and take a big toll on Travelers bottom line. 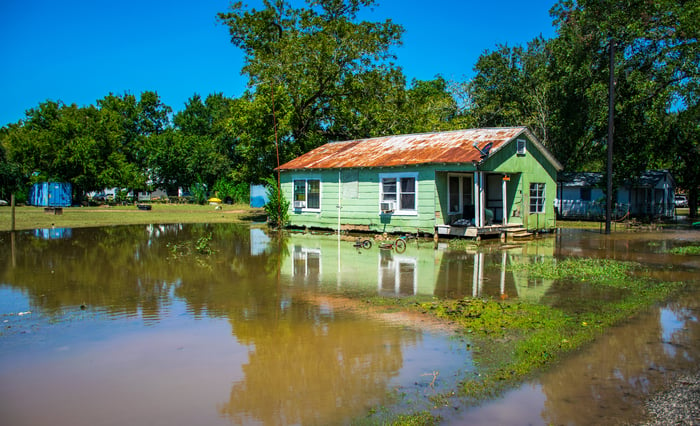 Hurricane damage in the billions of dollars

As one of the largest insurers in America, Travelers' will undeniably take a hit following Hurricane Harvey and Hurricane Irma. The two hurricanes delivered a one-two punch to Texas and Florida, respectively, that have Moody's Analytics' estimating damages of between $150 billion to $200 billion.

If Moody's cost estimates are correct, then Harvey and Irma's negative impact on property and casualty insurance will rival that of Hurricane Katrina, the Category 5 hurricane that devastated New Orleans in 2005.

Since Hurricane Katrina may serve as a benchmark for comparison, I looked into how Travelers' performed in its wake for clues to what may happen this time around. What's interesting is that following a drop when Katrina made landfall, Travelers' shares marched significantly higher in 2006 despite insurers having to pay about 80% of Katrina's losses. 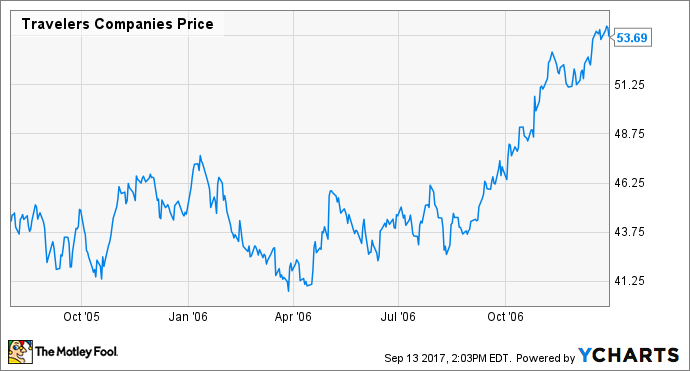 The rally in Travelers' shares wasn't due to it escaping Katrina unscathed. In fact, Travelers' combined ratio was a whopping 101.3% in 2005. Instead, Travelers' rally appears to have been due to growing demand for insurance coverage following Katrina.

Travelers premium revenue prior to Katrina was $19 billion in 2004. After Katrina, the company's premium revenue increased to $20.76 billion in 2006. Given how many people suffered catastrophic losses in 2005, it probably isn't too surprising that existing customers increased their protection and those who were uninsured came knocking. In Travelers' 2006 annual filing with the SEC, it cited "higher business volume" as a key driver of its improving performance.

With premium revenue climbing and fewer claims to pay, Travelers' combined ratio dropped to a very profit-friendly 88.1% in 2006.

Travelers' share price could go anywhere from here and its performance in 2018 may depend a lot on if there are fewer storms. Nevertheless, I think it's still a good time to buy shares in long-term portfolios. Even if next year's storms cause similar losses, it won't be the first time Travelers has posted back-to-back years with a combined ratio above 100%. It did that in 2004 and 2005, yet Travelers' has enjoyed significant revenue and profit growth over the past decade, and that's allowed it to return increasingly more money to investors in dividends. 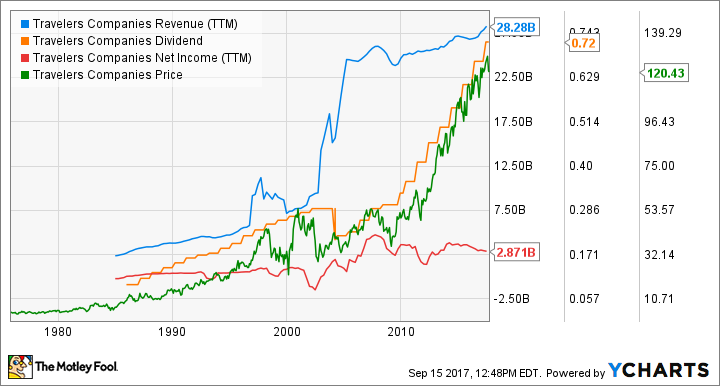 Currently, Travelers' is estimating that its pre-tax exposure to Hurricane Harvey, including estimated recoveries from reinsurance, will be somewhere between $375 million to $750 million and that's not chump change. However, investors should keep in mind that Travelers' is very well-heeled. For instance, this quarter alone the company had bought back $328 million of its shares before suspending repurchases on Sept. 11 because of these hurricanes.

Overall, Travelers will pay out a lot of money on claims caused by Hurricane Harvey and Hurricane Irma, but any sell-off in its share price should be considered a buying opportunity.

Should I Buy Travelers Stock Despite Hurricanes Harvey And Irma? @themotleyfool #stocks $TRV Next Article
Current