Activision Blizzard (NASDAQ:ATVI) is nearing completion of a dedicated esports venue in the Los Angeles area that will host the first season of the Overwatch League. The venue is the former studio for Johnny Carson and Jay Leno's The Tonight Show and now it will be the home of a sporting revolution in video games.

The LA arena comes on the heels of MGM Resorts (NYSE:MGM) announcing an esports arena with Allied Esports at the Luxor Hotel and Casino in Las Vegas. This could just be the beginning of esports arenas as the industry kicks off a big expansion to try and compete with other sports on the global stage. 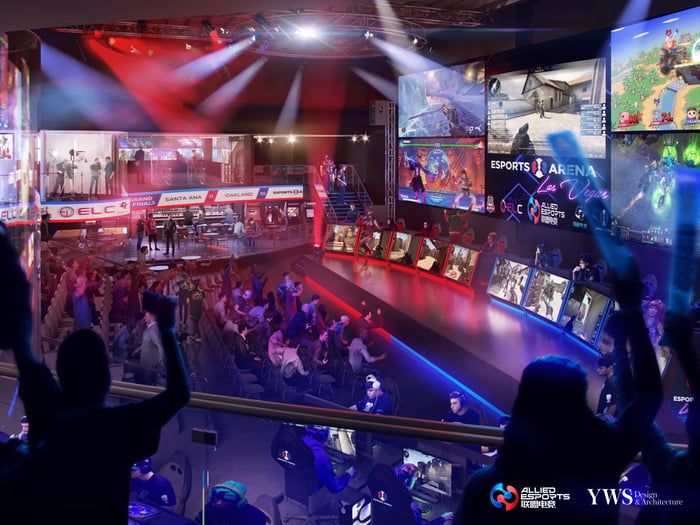 Esports arenas are coming to a city near you

While still in its early stages of development, the esports business is getting some real legitimacy in the gaming world. Nine Overwatch League teams have now been sold by Activision Blizzard to prominent owners of other sports franchises such as Robert Kraft (New England Patriots), Jeff Wilpon (NY Mets), and Stan Kroenke (LA Rams). The teams will look a lot like teams in other sports leagues, hiring players, training them, building stadiums, and selling tickets for fans to watch games. And there's big money involved. The rumor has been that Activision Blizzard was seeking $20 million per team and players are being paid in excess of $100,000 per year in some cases.

Arenas could be just the beginning to the monetary opportunities for esports. Other revenue streams are opening up such as custom team merchandise, venue tickets, advertising, and more. Teams could make millions in revenue their first year and esports could be a boon for game makers as well.

Owning the keys to the kingdom

Being in the role of Activision Blizzard and Electronic Arts (NASDAQ:EA) in esports is like owning the game of basketball. They create the games and can, therefore, create the sports leagues as they choose. And they'll take a percentage of revenue from the esports leagues, not to mention selling millions of games and digital add-ons that make games even more lucrative.

Call of Duty World League is the biggest league operating right now, handing out $1.5 million in prizes during the recent World League Championship. The Overwatch League is likely to get the most headlines over the next few years as Activision Blizzard builds out its esports model. But this could be just the beginning for esports games.

As leagues become more successful, game makers will figure out how to design games for esports and develop new ways to monetize content. There could also be a dozen, or more, leagues running at any given time, potentially using stadiums all over the world to hold events. Owning the games themselves puts Activision Blizzard and Electronic Arts in the driver seat of this new industry and it could be big enough to rival traditional sports from a revenue standpoint.

As the esports business grows, it could become a meaningful driver of Activision Blizzard and Electronic Arts' businesses long term as it opens up a plethora of new revenue streams and keeps players engaged. All of those are good trends in the game business and could keep these stocks moving higher for a long time to come.