It seemed obvious a decade ago that hydrogen-fueled vehicles would have a major place in the clean-fuel transportation infrastructure of the future. Small electric vehicles looked potentially viable from a cost and range perspective, but purchasers of some types of cars, as well as operators of large semitrucks and buses, were naturally going to be more inclined to use hydrogen. Hydrogen fuel cell companies like Plug Power (NASDAQ:PLUG) and Ballard Power Systems (NASDAQ:BLDP) saw an opportunity to emerge from small markets such as forklifts into the much larger markets for cars, trucks, and long-haul semis.

Pilot programs agreements with UPS and FedEx showed some promise, and companies like Toyota, Hyundai, and Honda hoped to push the technology and fueling infrastructure from the passenger-vehicle side. At worst, hydrogen seemed destined to be another common option alongside 100% electric vehicles.

Instead, while the popularity of electric vehicles both large and small is taking off, hydrogen fuel cell vehicles have struggled to gain any sort of meaningful traction in the market. Hydrogen may already be destined to occupy only niche applications in the transportation and energy storage market. 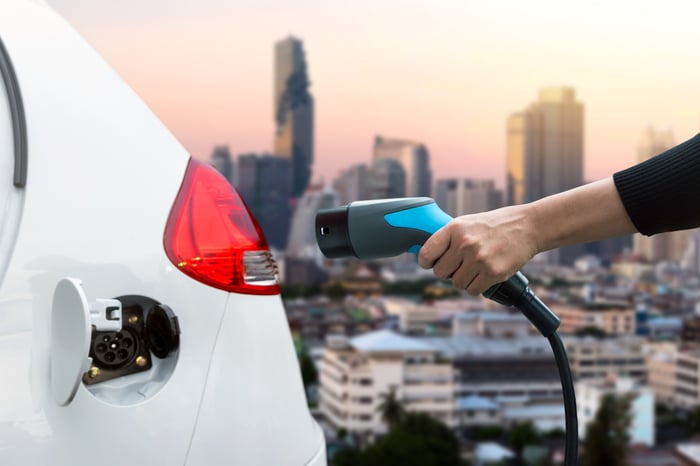 A few years ago, the argument against battery-powered vehicles was threefold. Only a small number of EVs offered the range to compete with conventional vehicles; charging times to provide 200 or 300 miles of driving were counted in hours; and for those vehicles that provided the range and features most consumers wanted, the sticker prices were prohibitive.

Those seemed to be hurdles EVs would have a hard time clearing, which meant hydrogen would have a leg up. But then the tech improved: Tesla's (NASDAQ:TSLA) Model S can go up to 315 miles on a charge and General Motors' (NYSE: GM) Chevy Bolt can go 238 miles. Range and cost are improving quickly, leaving only charging time as a hurdle. Or is it?

BMW, Mercedes-Benz, Ford, and VW's Audi and Porsche revealed in November that they are teaming up to roll out 350 kW charging stations on the CCS standard across Europe -- more than twice the speed of current leader Tesla's best 145 kW Superchargers. At that capacity, they'll be capable of providing over 1,000 miles of range per hour of charging. So, soon, it may only take 10 minutes to add 200 miles of range to your EV.

But a mere month later, Elon Musk tweeted that Tesla is looking at charging stations much faster than that.

On the cost side, EVs are progressing rapidly. Once the market was proved out, suppliers started designing batteries that can meet the auto industry's demands. Fast charging, high density, and lower cost are the criteria automakers are judging those batteries by, and there are multiple Gigafactory-size plants under construction around the world to build them.

A report early this year from McKinsey & Company said that battery prices fell 80% between 2010 and 2016 to $227 per kWh. Tesla claims it's already below $190 per kWh for battery packs. $100 per kW seems plausible in the near future. Under that scenario, a 100 kWh battery array that cost $100,000 in 2010 will soon be available for under $10,000. That advance alone could make all-electric vehicles far cheaper to own than internal-combustion-powered cars.

Hydrogen still has a niche role in energy

It seems clear today that hydrogen fuel cells don't have much of a future in the passenger-vehicle industry. But they could have some important applications.

Plug Power and Ballard Power Systems are having some success converting factory and distribution center forklifts to hydrogen. Downtime is lost money for their customers, so there's value for them in switching to hydrogen, which still offers faster refueling.

Likewise, long-haul trucking may also be an application better suited to hydrogen, given semitrucks' similar need to refuel quickly and get back on the road. That said, Tesla says it is developing a semi, and bus manufacturer Proterra has proven that buses and trucks with predictable local routes can easily be run on batteries.

The other hope for hydrogen is in long-term energy storage. With wind and solar energy providing a growing fraction of electricity on the grid, utilities will need to increase their capacity to store energy produced during lower-consumption periods for use during peak demand hours. Hydrogen could be a virtually unlimited storage medium for months on end.

Still, given the rapid improvements in battery technology, maybe hydrogen's day in the sun is already over.