Waymo's self driving cars have Intel (NASDAQ:INTC) inside. But is that all they have?

Intel revealed on Monday that it has been supplying chips to Alphabet's (NASDAQ:GOOG) (NASDAQ:GOOGL) autonomous-vehicle project since 2009 -- and that Waymo's latest test vehicles incorporate a customized processing chip along with other Intel technologies.

But the details supplied by Intel were somewhat vague, and it's not clear exactly what parts of Waymo's system Intel is -- and isn't -- supplying. 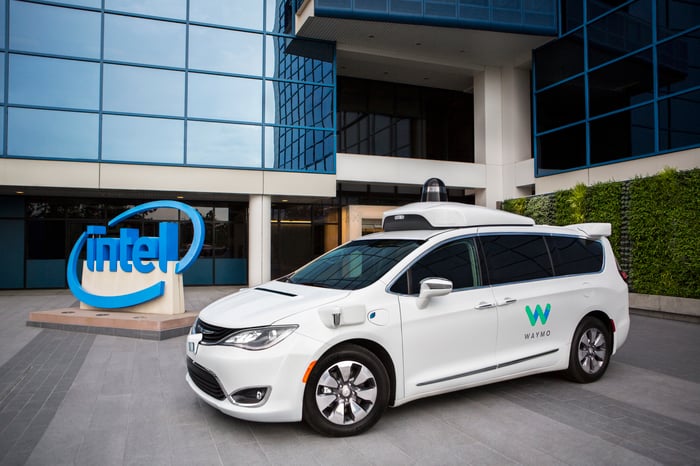 What Intel said about its collaboration with Waymo

The Waymo collaboration was revealed in a statement with Intel CEO Brian Krzanich's byline on Monday. Here's an excerpt:

As Waymo's self-driving technology becomes smarter and more capable, its high-performance hardware and software will require even more powerful and efficient compute. By working closely with Waymo, Intel can offer Waymo's fleet of vehicles the advanced processing power required for level 4 and 5 autonomy.

(I've written elsewhere about the "levels" of self-driving technology.)

In an interview with Reuters, Krzanich said that Intel created a "custom piece of silicon" to process sensor inputs for Waymo, and that the two are collaborating on an ongoing basis to try to build more of Waymo's software right into the chips to improve performance.

But there's something big that Krzanich didn't quite spell out, and that might be revealing.

Krzanich said that Intel is supplying Waymo with technologies for "sensor processing, general compute and connectivity." But with autonomous-vehicle systems, there's a big question: What's doing the really deep computing?

Krzanich didn't address that, and I think that might not be an oversight.

Self-driving systems like Waymo's are a form of artificial intelligence (AI). They seek to do everything a human driver could, including learning from experience over time. That so-called "deep learning" or "machine learning" requires heavy-duty algorithms -- or put another way, a ton of processing power.

This is where rival chipmaker NVIDIA (NASDAQ:NVDA) has found a huge potential market. NVIDIA's graphics processing units (GPUs), which have been the standard for heavy-duty computer graphics for years, turn out to be very well-suited for machine-learning applications.

Specifically, they're better-suited for those applications, many experts say, than Intel's processor designs.

The fact that Krzanich didn't come out and clearly say that Intel's processors are handing the deep-learning processing for Waymo's self-driving system raises a big question: What's doing that job? Is it Intel processors, an NVIDIA system, proprietary Waymo hardware, or something else entirely?

Krzanich seems to be at pains to assure investors that his company isn't falling behind NVIDIA in the race to provide the hardware for AI applications. In addition to the Waymo news, Intel also announced on Monday that it has invested over $1 billion in a portfolio of AI-related start-ups.

"I believe Intel will be the AI platform of choice, offering unmatched reliability, performance, security and integration," Krzanich said in that statement. "We are 100 percent committed to creating the roadmap of optimized products to support emerging mainstream AI workloads."

Intel's recent acquisition of machine-vision powerhouse Mobileye has opened a big door for the chip giant to build profitable long-term relationships with global automakers. But to make the most of that opportunity, and the many others in the emerging AI space, Krzanich needs to establish that Intel's technology can match or beat NVIDIA's.

He's not quite saying that right now. That seems revealing.