Cryptocurrencies like bitcoin may eventually crash and burn, but the underlying blockchain technology looks like it's here to stay. Exactly how transformative blockchain turns out to be is up in the air, but companies big and small are jumping on board.

International Business Machines (NYSE:IBM) may seem like an unlikely leader in this emerging area. But the century-old technology giant, years deep into a broad transformation and looking to shed its image as a dinosaur, is putting its weight behind blockchain. The move makes sense -- blockchain is particularly well suited for use in the financial services industry, and IBM counts major financial institutions as longtime customers.

The ultimate blockchain winners and losers likely won't be determined for quite some time. But IBM's blockchain efforts seem to be gaining momentum. 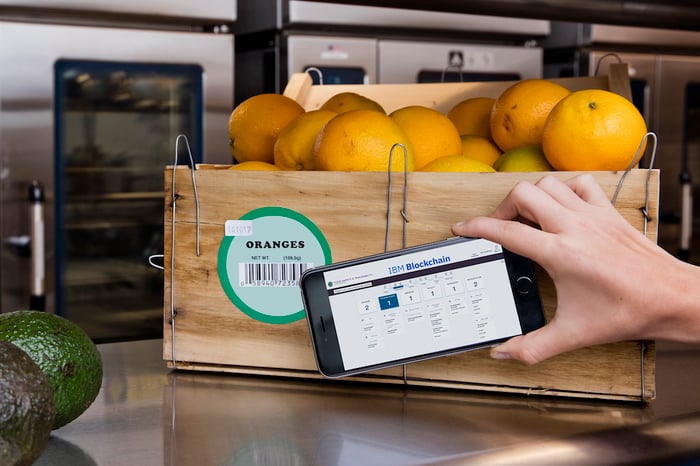 A recent survey by Juniper Research suggests that IBM is viewed as the far-and-away leader when it comes to blockchain. Juniper surveyed 400 company founders, executives, managers, and IT leaders, finding that among enterprises either considering or actively rolling out blockchain technology, 43% saw IBM as the top dog. Software giant Microsoft was a distant second at 20%.

One reason cited for IBM's dominance is the extensive list of blockchain clients the company has racked up. In March, IBM and shipping giant Maersk announced a collaboration aimed at using blockchain technology to make the transport and logistics industries more efficient. According to Maersk, a single shipment of refrigerated goods may go through 30 different people and organizations before it reaches its final destination. The blockchain-based solution will keep track of tens of millions of shipping containers, simplifying this process. The potential annual cost savings for the industry if blockchain is adopted widely would be measured in the billions of dollars.

Another big blockchain announcement followed in June. IBM is teaming up with seven major European banks to build a blockchain-based platform for trade finance. According to the World Bank, about half of small and medium enterprises lack access to formal credit. The seven banks involved are hoping a blockchain-based platform will lower costs and remove friction, allowing financing to be offered to an untapped customer base.

Last month, IBM announced another major blockchain deal. The company is working with global food companies, including Kroger, Wal-Mart, Unilever, and Nestle, to identify areas where blockchain could provide benefits for the global food supply chain. In a pilot program with Wal-Mart, a blockchain solution was able to track a product through the food supply chain in seconds, down from weeks. Quickly identifying the source of contaminated food has the potential to not only save lives, but also reduce costs for food companies.

In total, IBM has worked with over 400 clients to design or implement blockchain solutions. Unlike other recent technological shifts, like cloud computing, where IBM got a late start and now trails Amazon and Microsoft, the company has taken a leadership role. Blockchain probably doesn't generate much in the way of revenue for IBM at this point, but as always, the company is playing the long game.

One benefit IBM has is its existing, and sometimes decades-long, relationships with large organizations. IBM is a natural choice for a large company considering testing out blockchain if that company is already an IBM customer. According to IBM's latest annual report, a whopping 97% of the world's largest banks rely on IBM products, as well as 83% of the world's largest communications services providers and 80% of global retailers. Those relationships give IBM an edge.

Exactly how the blockchain story shakes out won't be clear for many years. Like all promising technologies, the hype may be outpacing the real-world benefits. But if blockchain fulfills even a fraction of its promise, IBM will be at the center of what could be a lucrative business.