Alphabet's Waymo subsidiary has been laser-focused on driverless cars for years -- and they've been quietly powered by Intel all along.

When most tech investors think of the technology that's powering driverless vehicle platforms, they think of NVIDIA (NVDA -1.36%). There's good reason for that, as its powerful graphics processing units (GPUs) set the standard for the deep learning/image processing required for autonomous cars to sense and respond to the world around them.

But Intel (INTC 0.17%) surely stole some of NVIDIA's thunder this week when it revealed that its chips are powering some of the most advanced driverless car technology for Alphabet's (GOOG -1.58%) (GOOGL -1.90%) Waymo subsidiary. 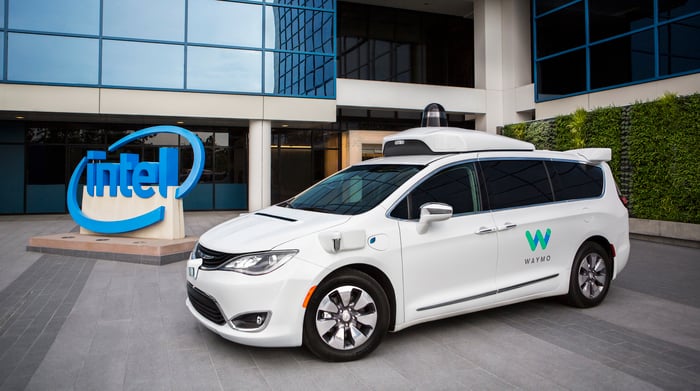 In short, Waymo -- formerly known as the driverless car division of Google -- uses Intel to power all the image processing from sensors, all the data processing for self-driving tasks, and even uses its connectivity chips.

This revelation is big news for investors considering that the autonomous car market is expected to reach $77 billion annually by 2035, and Intel is keen on grabbing as much of that market as possible.

Waymo currently has about 600 Fiat Chrysler Pacifica minivans on the road right now and is already publicly testing its self-driving vans in Phoenix. But it isn't making any money yet, nor has it rolled out its service nationwide. So why is this partnership a good thing for Intel right now?

Because having Intel's chips in some of the most advanced driverless platforms on the planet proves the company can pursue new and emerging markets with its processors and still lead with its chip technology.

Intel believes that driverless cars will create a $7 trillion a year passenger economy -- a forecast that factors in everything, from driverless vehicle sales and technology spending to the entirely new services that will be built up around the autonomous car ecosystem.

ADAS systems control the key semi-autonomous safety features in many new cars -- think automatic braking and lane-keeping -- and they're the foundations upon which fully autonomous driving systems are being built. Mobileye holds more than 60% of the ADAS market, and by purchasing it,  Intel instantly boosted its relevance in the space.

Mobileye will not only help Intel expand its own technology offerings but also allow Intel to showcase how well its chips can work within ADAS systems. Buying the company was a smart move on its own, but in light of the latest Waymo news, it looks even smarter. If automakers and tech companies had been questioning whether Intel's chips could handle the heavy requirements of driverless car platforms, that question has certainly been answered.

This could still take a while

Driverless cars offer a massive opportunity to Intel, but it will still take a while before the company can truly benefit. Mobileye only made $358 million revenue last year, compared to Intel's $59.4 billion, so don't expect any meaningful impact from that purchase right now.

And as I mentioned before, Waymo is still in the early stages too, which means that Intel won't be seeing a massive uptick in sales of processors or chips to the Alphabet unit anytime soon either. Intel's Internet of Things Group (IOTG) -- which includes the company's chips sales for transportation -- only contributed 5% of total revenue in 2016.

But investors should remain patient. Not many companies are making significant revenue from the driverless car market right now, and it's not expected to fully mature until around 2050. In the meantime, stay confident that Intel will be in the mix for the long term: It's already powering some of the most advanced autonomous vehicle systems on the road.