Audi's new A8 is one of the most advanced semi-autonomous cars in production, and it comes equipped with NVIDIA's technology.

NVIDIA (NVDA 0.33%) has been working for years to bring its semi-autonomous vehicle technology to the roads, and the company just showed that it continues to be a leader in the space with the debut of Audi's (AUDVF) new A8. Audi says its new luxury sedan is the first production vehicle capable of Level 3 automation, which allows drivers to take their hands off the wheel and give the car control in some driving conditions but still requires them to be aware of their surroundings, and stay ready to take back control if necessary.

As my fellow Fool John Rosevear recently pointed out, it's up to each automaker to say what self-driving level its cars are, and standards are not universal. So Audi's new A8 may not technically have more semi-autonomous driving features than Tesla's (TSLA -1.56%) Model S, which Tesla describes as only Level 2.

Then why is all of this big news for NVIDIA? Because no matter which automaker technically has the most advanced semi-autonomous vehicle on the road, the chipmaker's technology is consistently used in many of them. 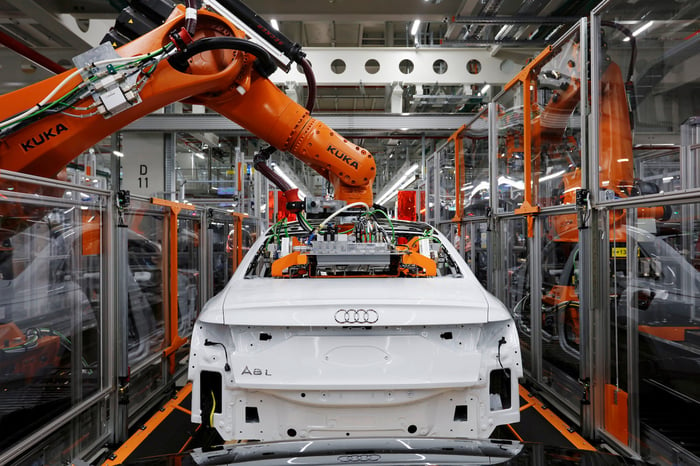 NVIDIA has been working with Audi for a while, but their relationship ramped up earlier this year when Audi said that it would use the tech company's Drive PX 2 hardware and software in its future vehicles. The culmination of that partnership is Audi's zFAS system, which allows a vehicle to drive up to 37 mph in heavy traffic on some highways and freeways (if they have a physical barrier between the two sides of the road), without the driver having to keep their hands on the wheel.

NVIDIA said in a blog post that its technology will process data that the A8's sensors collect at a rate of 2.5 billion inputs per second. That's even more important in this case because the A8 is the first production car to include lidar, a laser system that scans the vehicle's surroundings.

In addition to its deal with Audi, late last month, NVIDIA announced a new partnership with Volvo to help that company bring fully autonomous cars to the road by 2021. And NVIDIA had already announced plans to work with Mercedes-Benz and Toyota.

Toyota will use NVIDIA's Drive PX 2 supercomputer as the brains for the semi-autonomous vehicles it's bringing out in the next few years. That partnership is particularly notable because Toyota is the largest automaker in Japan.

And of course, last year, Tesla publicly pivoted away from driverless car tech specialist Mobileye, and decided to start using NVIDIA's technology for some of its semi-autonomous driving features. Tesla likely wanted to ensure it could meet its ambitious driverless car goals, and ultimately concluded that NVIDIA's system was the best way to make that happen.

These recent partnerships are important because automakers are closing in on their internal goals to offer more-advanced autonomous features by 2020 or 2021, and picking the right technology to make that happen is critical to hitting those deadlines.

The driverless car opportunity is growing

Investors should know that the automotive business is still a relatively small piece of NVIDIA's revenue picture right now. In the first quarter of fiscal 2018, the segment brought in $140 million, which was just 7% of its total revenue.

That shouldn't concern investors right now though. After all, Audi's new semi-autonomous A8 isn't even for sale yet, and most automakers are only just beginning to release models with more advanced semi-autonomous features.

Boston Consulting Group estimates that the annual value of the driverless car market will reach $77 billion by 2035. That leaves plenty of time for NVIDIA to build more partnerships and earn even more from its technologies. The first step on that path involves getting its tech into more of the most advanced semi-autonomous cars on the market -- and with the upcoming release of Audi's A8, investors can consider that step already taken.