Audi AG (OTC:AUDVF) said that its all-new A8 luxury sedan, coming to the U.S. next year, will be available with a Level 3 autonomous-driving system -- a first for the industry.

It's a clear statement that Audi, a subsidiary of giant Volkswagen AG (OTC:VWAGY), intends to be in the forefront of the autonomous-vehicle revolution. But with this new system, there's a catch: When -- and whether -- Audi's Level 3 system becomes available in markets around the world will depend on government regulations. 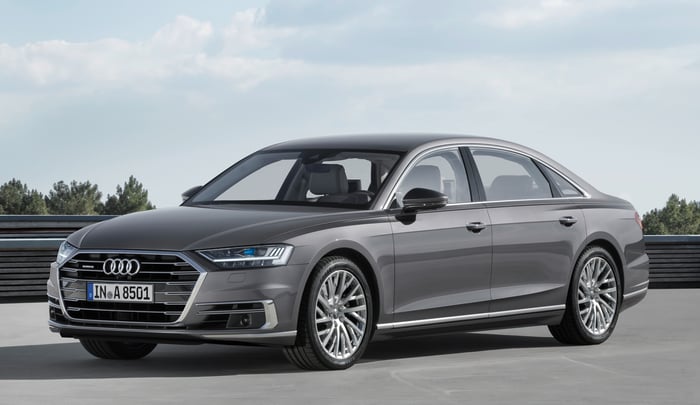 Audi said that it will offer a partial self-driving system in its all-new 2018 A8 luxury sedan. Image source: Audi AG.

People in the auto industry use a system of "levels" (from Level 0 to Level 5) as a shorthand to describe the capabilities of a driver-assist system. A Level 3 system is one that allows hands-off driving under some circumstances, but requires the driver to be alert and ready to take back control of the car. (That requirement has raised concerns within the industry -- more on that in a bit.)

An important point to remember is that the "level" of a given system isn't determined by third-party testing. It's a label applied by the manufacturer, which is presumably in the best position to know what its system can (and can't) do.

In at least one way, Audi's system is a big advance

Audi said that the all-new A8 -- its top-of-the-line large luxury sedan -- was developed with autonomous driving in mind. But its new system will work only in specific, limited circumstances, at least at first.

The new A8 is the first production automobile to have been developed specially for highly automated driving. The Audi AI "traffic jam pilot" takes charge of driving in slow-moving traffic at up to 60 kilometers per hour (37.3 mph), on freeways and highways where a physical barrier separates the two carriageways.

Although the claimed capabilities of Audi's system are fairly modest, the system itself does break new ground for a production vehicle. It appears that Audi will be the first automaker to offer a vehicle equipped with a laser scanning unit, or lidar.

Lidar uses invisible laser beams to create an extremely precise "map" of the vehicle's surroundings that is continuously updated. Typically, a self-driving system compares the lidar image to a highly detailed 3D map to understand exactly where the vehicle is located.

Lidar units are key to most of the self-driving systems under development. The high cost of existing lidar units has been one factor holding back self-driving vehicles, but costs are falling rapidly. 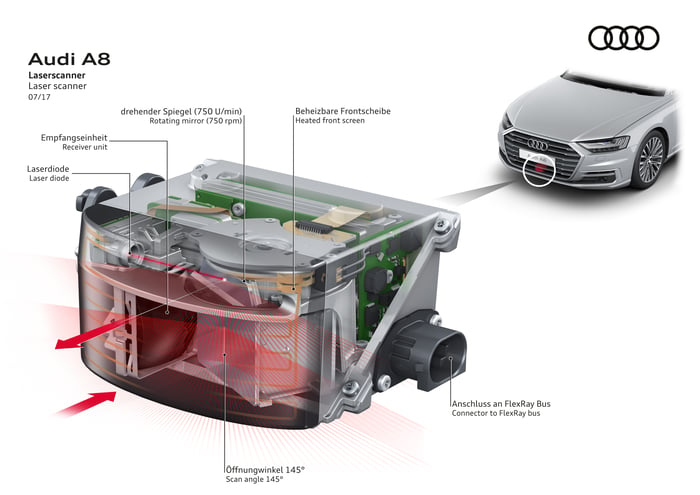 Audi's lidar unit will be installed in the front of the upcoming A8. Image source: Audi AG.

Is it really a Level 3 system?

But that said, the stated capabilities of Audi's system aren't all that different from systems already being offered by Mercedes-Benz and Tesla (NASDAQ:TSLA), and soon to be offered by General Motors (NYSE:GM) on its Cadillac CT6 sedan.

Note that Tesla and Cadillac both describe their systems as Level 2.

Consider: A Level 3 system like Audi's does the driving for you under limited circumstances, but it needs you to take over quickly when the car's situation exceeds the system's capabilities.

If the human driver is distracted, it might take several seconds to refocus, understand the car's situation, and take control. The concern is about that time lag: What's happening to the vehicle while the human is getting his or her bearings?

That concern has led some automakers, including Ford Motor Company (NYSE:F) to declare that they would skip Level 3, and work toward a full Level 4 system that can drive the car under most circumstances instead.

When will buyers be able to get Audi's new system?

The new A8 will launch in Europe this fall, and will arrive in the U.S. sometime next spring. But when the new Level 3 system will be available is another question, and the answers will vary by country. Right now, it isn't even legal to offer a Level 3 system in Audi's home country of Germany, though Audi's CEO expects that to change next year.

I won't be surprised if Audi works with U.S. regulators to make way for the system sometime next year. At that point, we'll see how well it stacks up against rivals.