It's not "vaporware" after all: Audi AG (OTC:AUDVF) said that mass production of its first all-electric SUV, the e-tron, began on Monday at a freshly retooled factory in Brussels, Belgium.

The e-tron is an upscale battery-electric SUV aimed squarely at Tesla (NASDAQ:TSLA) and its Model X. It's the production version of a much-talked-about concept vehicle, the Audi e-tron quattro, that the company first showed in 2015. It's also the first of a wave of serious new battery-electric vehicles expected from brands within the Volkswagen Group (OTC:VWAGY) over the next four years.

It's also the first of several Tesla challengers coming from the German luxury brands between now and the end of next year. Here's what we know -- and what it means for investors looking to profit as the world's transition to electric vehicles gets underway. 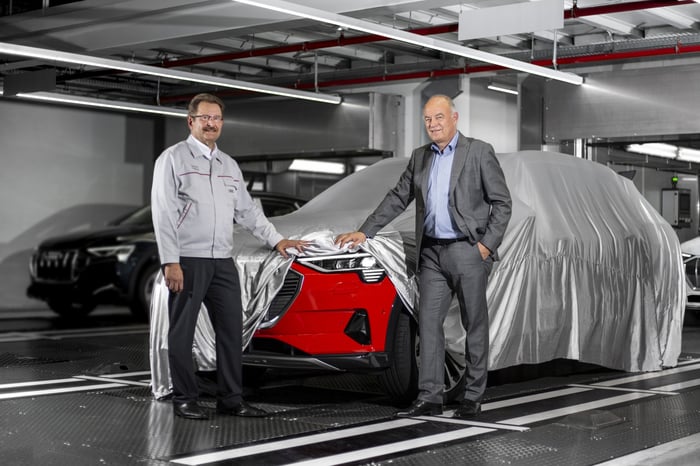 What it is: A no-excuses premium electric SUV

We don't have all of the final, official specifications for the e-tron yet -- we'll get those at Audi's official reveal event, scheduled to take place on Sept. 17 in San Francisco. But Audi has been testing lightly disguised e-tron prototypes on public roads for months, and it has shared quite a bit of information along the way.

The e-tron is a dual-motor, all-wheel-drive SUV that Audi said will get over 400 kilometers (248.5 miles) of range on Europe's new, tougher Worldwide Harmonized Light Vehicle Test Procedure (WLTP) cycle. (The WLTP test is more conservative than the old European Union electric-vehicle test standards. Its results have so far tended to be very close to test results using the U.S. standards.)

Audi said in July that its close-to-final prototypes have two electric motors that together have 265 kilowatts (kW) of output and develop 413.8 foot-pounds of torque. The e-tron's system will allow that maximum output to be delivered for up to 60 seconds, allowing the vehicle to accelerate from 0 to its electronically limited maximum speed of 124 miles per hour (mph) several times consecutively. 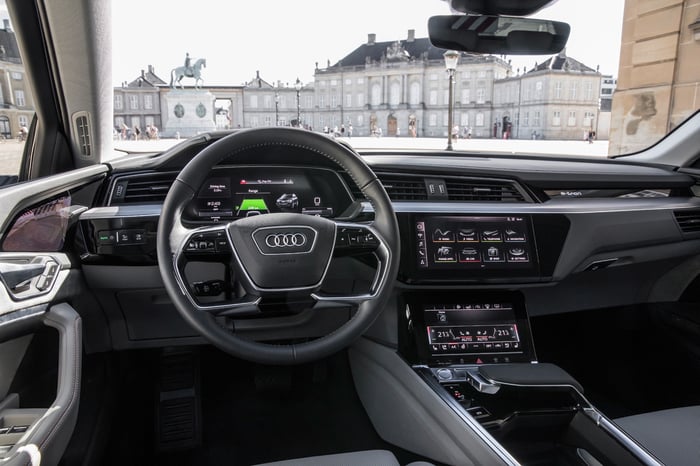 The e-tron prototype's interior is standard-issue Audi. That's not a bad thing: Audi's interiors are among the best in the business. Image source: Audi AG.

It's nothing like Tesla's "Ludicrous Mode," but the e-tron prototype also had a "boost mode" available, in which the motors can provide 300 kW of output and 489.7 foot-pounds of torque for 8 seconds. In boost mode, the e-tron prototype could go from 0 to 100 kilometers per hour (62 mph) in "less than 6 seconds." (Don't get too giddy, Tesla fans: Remember that these figures are for a prototype of the base-spec e-tron. There will surely be faster versions offered later on.)

Inside, it's an Audi, meaning that the interior is impeccably trimmed and loaded with high-tech features. Among those features is an energy-recovery system that improves both braking and range. Audi claims it's the most efficient yet offered by any automaker. 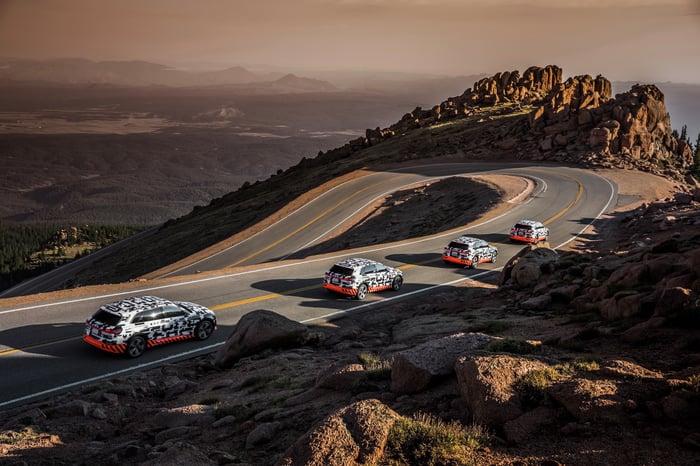 Audi hasn't yet published dimensions for the e-tron, but it looks like Tesla's Model X might be a bit bigger.  While Audi describes the e-tron as a "full size" SUV, it appears to be a two-row vehicle, with seating for five. The Tesla can be ordered with a third row.

Here in the U.S., the Model X 75D is a bit cheaper: It starts at $83,000 before incentives. We don't yet know what Audi will charge for the e-tron when it arrives here, likely early in 2019, but there's a good chance that the Audi will be more expensive than the Tesla in the U.S.

Of course, we don't yet know how the Audi e-tron will stack up against the Tesla in an on-the-road comparison test. That will tell us a lot about its sales prospects.

The upshot: Audi appears to have a contender

It looks like the e-tron will join the Jaguar I-Pace as the first serious head-to-head competitors to the Tesla Model X. The I-Pace is a size smaller than the X, but -- like the e-tron -- it otherwise compares well on paper, and road tests of the electric Jaguar have been very positive.

I expect that the battery-powered Audi will fare similarly. It should compare well with the Tesla, though it's unlikely to represent a significant step forward. That's probably enough: For buyers who have been intrigued by the idea of an electric vehicle, but hesitant to buy a Tesla, the Audi might be the vehicle they've been waiting for.