Please ensure Javascript is enabled for purposes of website accessibility
Log In Help Join The Motley Fool
Free Article Join Over 1 Million Premium Members And Get More In-Depth Stock Guidance and Research
By John Rosevear – Updated Sep 4, 2018 at 11:30AM

Audi just unveiled a new battery-electric SUV. Set to enter production in early 2018, it's the first direct competitor to Tesla's Model X. How does it compare?

Tesla Motors (TSLA -6.81%) CEO Elon Musk has been saying for years that he wants the big automakers to get serious about electric cars.

This week, we learned that one of the very biggest is doing just that. Upcoming offerings from the Volkwagen Group's (VWAGY -10.85%) luxury brands look set to give Tesla its first serious competition, starting in about two years.

That should make Musk happy. But what does it mean for Tesla? 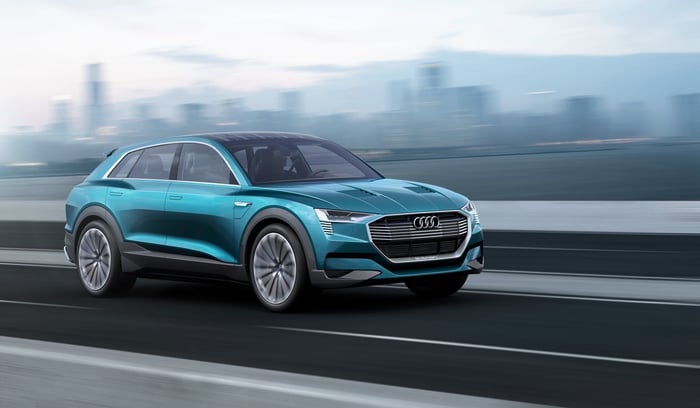 It's just a concept for now. But this all-electric Audi SUV looks set to be the first serious challenger to Tesla Motors. Image source: Audi.

500 kilometers of range, and just 50 minutes to recharge
As was widely expected, Audi unveiled a battery-electric luxury SUV at this week's Frankfurt Motor Show. Audi chief technical officer Ulrich Hackenberg described the vehicle, which Audi is calling the "e-tron quattro concept," as a "concrete foretaste" of an SUV that will go into production in early 2018.

That vehicle is expected to be called the Q6, and if it's anything like the concept, it'll provide stiff competition for Tesla's Model X SUV. The e-tron quattro concept sports three electric motors, one in front and two driving the rear axle. Together, they provide 320 kilowatts of output, Audi says, enough to push the SUV from zero to 100 kilometers per hour (62 mph) in 4.6 seconds. 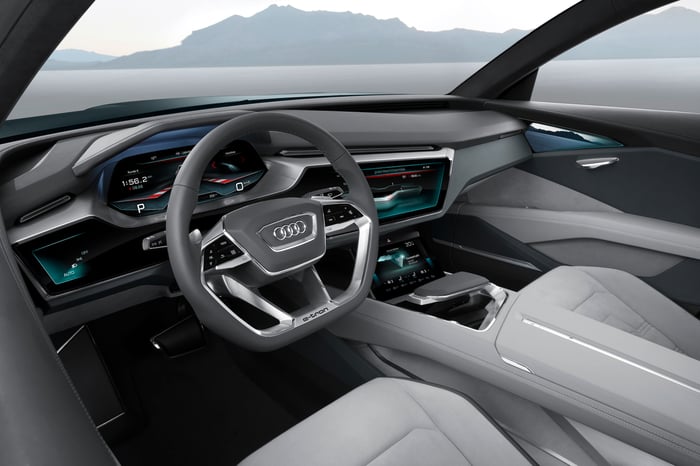 The concept's interior is finished to a high standard and looks nearly production-ready. Image source: Audi.

The concept's battery pack suggests that the VW Group is close to matching Tesla's technological edge. It's a 95 kilowatt-hour unit, and Audi claims it gives the concept a range of "over 500 kilometers," or 311 miles.

VW also seems to have taken a big step forward in fast-charging technology. The Audi concept incorporates what it calls the Combined Charging System, or CCS, which allows charging with either DC or AC electrical current. It claims that with the right DC charger, the concept's 95 kWh battery pack can be fully recharged to 500 km of range in just 50 minutes. That's very competitive with Tesla's Superchargers, which can add about 270 kilometers of range to a Model S in about 30 minutes.

So what does all this mean for Tesla?
The short answer is "nothing, yet." It's one thing for an automaker to make claims for a concept car, another thing entirely for a production version to prove those claims in real-world testing. The production version of this Audi SUV won't even be available to reviewers for at least two years. That gives Tesla time to sell a whole lot of Model Xs -- and time to hone its technological edge further.

But the e-tron quattro concept and a similarly impressive electric sports sedan that corporate sibling Porsche showed off this week are first tangible signs of what is said to be a very well-funded effort by the VW Group to develop legitimate, cutting-edge electric cars for the mass market. 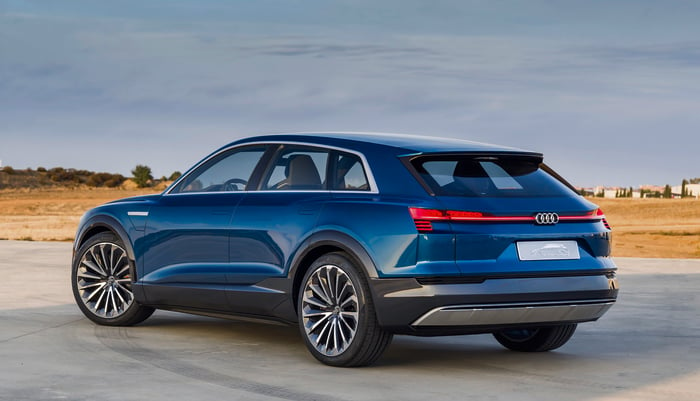 Compared straight-up to the Teslas, they appear to compete well. VW has roughly matched Tesla's battery and recharging technology, and both Audi and Porsche are likely to outdo rival Teslas on the fronts that play to their brands' strengths.

So is that good or bad for Tesla? That depends on the market: If the VW Group's serious commitment to battery-electric technology ends up expanding the market for (or put another way, increasing consumers' acceptance of) electric cars, Tesla will have a bright future as long as it manages to stay competitive with its (much) larger rival.

But if the market for "premium electric vehicles" turns out to be limited to well-heeled technology buffs, then Tesla will have a fight on its hands. Stay tuned.

John Rosevear has no position in any stocks mentioned. The Motley Fool owns and recommends Tesla Motors. Try any of our Foolish newsletter services free for 30 days. We Fools may not all hold the same opinions, but we all believe that considering a diverse range of insights makes us better investors. The Motley Fool has a disclosure policy.