Please ensure Javascript is enabled for purposes of website accessibility
Log In Help Join The Motley Fool
Free Article Join Over 1 Million Premium Members And Get More In-Depth Stock Guidance and Research
By Travis Hoium, Rich Smith, and John Rosevear - Sep 13, 2015 at 10:07AM

Tesla Motors is the king of EVs, but will it be able to hold off these competitors as the market grows?

No company has made a bigger bet on the future of electric vehicles than Tesla Motors (TSLA 1.24%). Outside of a very small energy storage business, the company gets almost all of its revenue from EVs, and CEO Elon Musk's vision of producing 500,000 EVs per year is a testament to his confidence in the future of battery-powered vehicles.

But the auto business has a history of failed start-ups, especially those without the scale to produce new innovations before competitors catch up. If Tesla Motors is going to hold on to its throne atop the EV world, these are the companies it needs to watch closely.

Travis Hoium: If Tesla Motors is going to lose its crown as the King of EVs, it won't be to a company trying to sell a short-range EV to the masses. Today, batteries are simply too expensive to build a long-range vehicle to challenge Tesla Motors that will still be affordable. So its biggest challenge will come from someone who can beat it at making high-end electric vehicles and then pushing them downmarket. In that space only one name comes to mind: BMW (BAMXF -1.29%).

Of the companies putting significant effort into EVs, BMW is the only one with the reputation for performance to match, or beat, Tesla Motors. It also has the engineering knowhow to mass-produce a high-performance EV, and is incorporating important advancements like carbon fiber to reduce weight in electric vehicles, something needed to offset the weight of long-range batteries.

What Tesla Motors should worry about is that BMW has put more effort into EVs than almost anyone, with smashing success so far. The BMW i3 and i8 were sold out in the U.S. the moment they arrived, and the all-electric i3 was built with a carbon-fiber frame and sold for a very reasonable $42,200. I think BMW could scale an EV faster than Tesla Motors engineers would like to admit, and it would likely be a success given the company's current performance in the space.

BMW may have been tiptoeing into the EV market initially, but after proving it can build a successful product and that its brand and engineering expertise translate to the EV space it looks like a big potential threat to Tesla Motors.

John Rosevear: Germany's Volkswagen Group (VWAGY 0.11%) has become one of the world's two biggest automakers thanks to a willingness to spend aggressively to capture new markets.

And now, it's turning its sights on the market staked out by Tesla.

Later this month, it will unveil a concept version of a new Audi SUV. Like the Teslas, this new Audi has been designed from the ground up as an electric car.

Audi is claiming a range of over 500 kilometers (310 miles) for what it calls the "e-tron quattro concept". Reports suggest that the range claim is for real: Volkswagen seems to have made a battery-technology breakthrough that will allow it to match or beat the range of current Teslas. 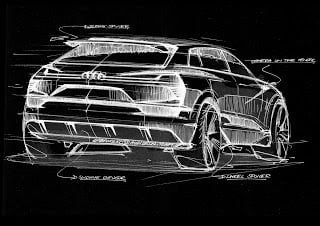 Audi released this sketch of its "e-tron quattro concept". The concept, a preview of an upcoming battery-electric SUV, will be unveiled in Frankfurt later this month. Image source: Audi.

Right now, all we have are sketches. But we don't need any more than that to know that this new Audi SUV is aimed squarely at Tesla's Model X.

This is just the beginning of a well-funded push into electric cars by the Volkswagen Group. A slew of new cars using the Group's new battery-electric technology is expected to follow this Audi, including a Porsche sedan that should give the Model S (or its successor) some very stiff competition.

Porsche and Audi are both known for relentless attention to detail. If any established automakers can match or beat Tesla's high-tech cool, it seems likely that they can. And with VW's scale and bankroll behind the effort, they'll have a good chance of succeeding.

Rich Smith: Honda Motors started the whole "electric vehicles for the mass market" trend. Tesla popularized it with the Model S. Now, it's time for Nissan (NSANY -1.48%) to bat clean-up and take this market over.

How will they do that, you ask? (More likely, you're asking: Didn't they already try that with the LEAF?)

As a matter of fact, they did. And you're right: It didn't work. Despite selling a car that costs as much as three times LEAF's price, Tesla outsold Nissan in electric vehicles in six of the last eight months. (They also outsold General Motors' Volt in seven of the last eight months.) But here's the thing: Nissan has the secret to beating Tesla already all worked out. They just need to supersize it, and advertise it better.

You see, Tesla's big selling point on its car -- aside from rave reviews from Consumer Reports -- is the fact that it boasts better all-electric range than any other EV out there. A fully charged Model S will move you as much as 270 miles down the highway, whereas a LEAF peters out at just 84 miles today.

Granted, Nissan is hard at work trying to up LEAF's range to 250 miles. But I think that's neither here nor there. The real key to unlocking LEAF sales is for Nissan is to do away with "range anxiety" entirely.

Nissan already tried this once, when it floated LEAF buyers an offer of 10 days' free rental of a gasoline-powered car -- to eliminate range anxiety on long family vacations. That offer has been rolled back to just seven days since -- but that was a big mistake. If Nissan were to offer LEAF buyers an unlimited number of days of free rental on a gas-powered minivan or SUV, for example -- emphasizing family-road-trip friendly vehicles -- I expect that would spur sales significantly.

Will Tesla Motors hold on to its throne?
We're still in the early innings of the EV revolution, and well-capitalized competitors are just now starting to put real effort into the market. Can Elon Musk and Co. hold on to their current crown, or will the manufacturing expertise and scale of competitors overtake it? BMW, VW Group, and Nissan Motors may be the three companies it needs to watch closest.