Slack recently raised $250 million in its latest funding round, with over half that total provided by Softbank's Vision Fund. The round valued the workplace messaging start-up at $5.1 billion, up from a valuation of $3.8 billion last April. 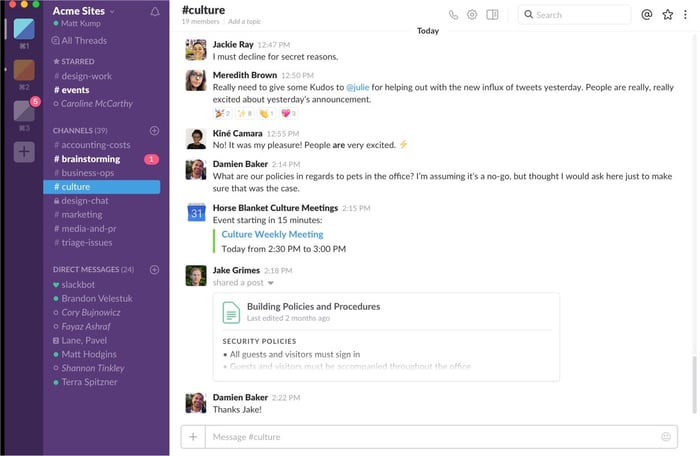 It's on track to generate $200 million in annual recurring revenue, compared to an estimate of $150 million earlier this year. 55% of Slack's users are overseas, and it plans to launch French, German, Spanish, and Japanese versions this year.

Slack's growth is attributed to the desire for companies to move past the email inbox toward a more streamlined communications platform. Could that market shift threaten Microsoft (NASDAQ:MSFT), which dominates the enterprise market with its Outlook, Skype, and Office products?

Microsoft has been watching Slack closely

Microsoft once considered buying Slack for $8 billion, but the idea was struck down by co-founder Bill Gates and CEO Satya Nadella. Gates reportedly wanted Microsoft to expand Skype's ecosystem to counter Slack instead.

The result was the creation of Microsoft Teams, which the media dubbed a "Slack Killer" when it launched earlier this year. Microsoft added Teams as a feature to its Office 365 suite, which includes Word, Excel, and its Skype video conferencing service.

However, Slack has already won over big customers like IBM and Capital One -- giving it a clear first mover's advantage against Microsoft. Slack is also easily integrated with Office 365, which makes it tough for Microsoft to convince big enterprise customers to use Teams instead.

But Microsoft still has big advantages

Microsoft hasn't revealed any stand-alone growth figures for Teams yet, but it revealed that it had 85 million Office 365 commercial subscribers last October. Industry watchers expect that figure to top 100 million this year. Tethering Teams to that massive ecosystem could certainly throttle Slack's growth.

Slack generates revenue from paid tiers, which cost between $80 and $150 annually -- excluding the additional costs of subscribing to Google Apps or Office 365. Meanwhile, Microsoft's basic Enterprise E1 subscription to Office 365, which includes Teams, costs just $76 per year. Therefore, subscribing to Office 365 could be more cost effective than Slack for many businesses.

Slack clearly recognizes Microsoft Teams as a major threat. It took out a full-page newspaper ad last November to give the company some sarcastically "friendly" advice about the workplace messaging market, while defiantly insisting that it was here to stay.

Yet Slack's growth is still slowing down. Adding a million DAUs since January isn't impressive compared to previous years, when it added a million DAUs every three to five months. It also isn't profitable, and it might need to burn through a lot more cash to compete against Microsoft.

Should Microsoft worry about Slack, or other competitors?

Slack's growth and $5 billion valuation might seem impressive, but Microsoft's Office 365 ecosystem gives it major advantages against the scrappy underdog. Microsoft probably won't crush Slack, since it has millions of loyal users, but it could relegate it to a niche app in the crowded enterprise messaging market.

Instead of worrying about Slack, Microsoft investors should keep track of other competitors in the market -- including Atlassian's (NASDAQ:TEAM) Hipchat, Cisco's (NASDAQ:CSCO) Spark, and Amazon's (NASDAQ:AMZN) Chime. Cisco and Amazon are particularly dangerous, since they can respectively leverage their dominance of the networking and cloud platform markets to launch their collaboration tools.

It's unclear if the enterprise messaging market will remain fragmented, or if one of the big ecosystem players like Microsoft will consolidate it. However, it's clear that workplace communications is evolving quickly beyond email, and there's plenty of money to be made with these streamlined messaging platforms.