A customer-rewards program may have given Chipotle a way to truly assess its test of queso before going nationwide.

A lot of people aren't digging the new queso at Chipotle Mexican Grill (CMG -0.05%). The meandering burrito roller's noble attempt to create the processed creamy cheese topping by sticking to all-natural ingredients is blowing up on social media -- and not in a good way.

Negative reviews are far outweighing the positive ones, sending the shares to a fresh 52-week low on Tuesday. The irony here is that Chipotle tested its pungent and soupy concoction in two different markets and its New York City test kitchen before unleashing it across the country last week. Social media didn't like it then, either, but the chain still went through with the national rollout.

"What we are seeing now in terms of social sentiment is very similar to what we saw when we began marketwide tests in Colorado and Southern California, yet we were sufficiently encouraged by those tests -- both in terms of sentiment from the research we conducted and business results -- to roll out the queso nationwide," Chipotle spokesman Chris Arnold told Reuters earlier this week.

The comment suggests that sales are strong and that there's a silent majority loving Chipotle's queso, but it's a big gamble that the chain is making by assuming that everything will work out in the end. It's a decision that could've been easier to make if Chipotle had introduced a customer loyalty program the way it suggested shortly after last year's Chiptopia promotion. 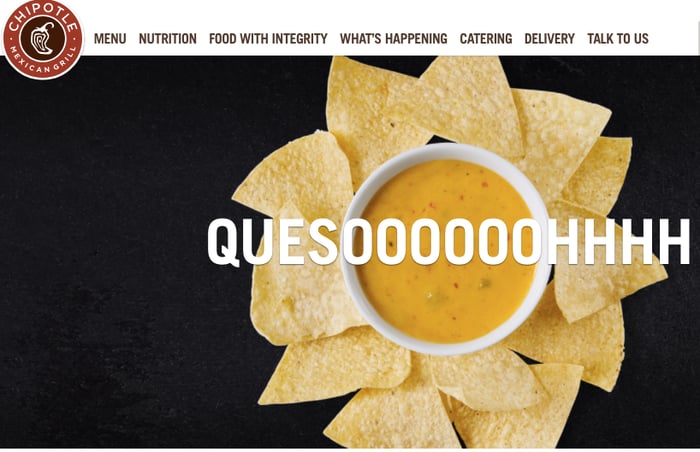 Chipotle ran a three-month promotion last summer arming regulars with a card that would reward customers with free grub after several repeat visits. When Chiptopia ended at the end of last year's third quarter, Chipotle told analysts that a more permanent rewards program was in the works. It never came.

Chiptopia helped the chain track personal usage. Chipotle can monitor individual trends to a certain extent through mobile ordering and credit card transaction data -- it obviously doesn't operate in a vacuum -- but nothing beats having 3.6 million of your most rabid fans swiping Chiptopia loyalty cards at every purchase the way they did last summer. It would've been nice to have a consensus on queso from its Chiptopia regulars.

Chipotle feels that it's doing the right thing and that all of the knocks that its reputation has been taking over the past 10 days will be worth it once the masses warm up to the chain's version of queso. However, it's hard to have faith in the chain's judgment. Days after Chiptopia came to an end, the chain went nationwide with chorizo, the fast-casual giant's first new menu item since 2013. It flopped, and Chipotle conceded earlier this week that it's taking chorizo off its assembly lines to make more room for queso.

Chorizo failed, and it didn't load up social media with skewering critiques the way that queso has been doing this month. Chipotle shareholders will naturally hope that the chain is right, and that they'll be laughing all the way to the bank a year from now with queso dripping off their chins. However, given everything that seems to be going wrong to send the stock to its lowest level in more than four years, it's hard to give Chipotle the benefit of the doubt with its queso rollout.