Activision Blizzard (NASDAQ:ATVI) recently published a press release touting the first-week performance of Destiny 2. However, the document contained no actual sales figures, and the only publicly released sales tracking is hardly encouraging.

First-week physical sales for Destiny 2 were reportedly down 58% in the U.K. compared to the series' first entry back in 2014 -- a good indication that the game's debut in other key territories is also down substantially from the first Destiny.

As a key entry in an important, young franchise -- and one of the company's only big 2017 releases -- that's potentially worrying. But there are also reasons to think that the game will still wind up being a success. Let's try to form a clearer picture of the game's performance and what it might mean for Activision.

For starters, the original Destiny had the benefit of launching on PlayStation 3 and Xbox 360 in addition to the PlayStation 4 and Xbox One platforms, while its sequel released only on the latter two consoles. Destiny 2 will release on PC on Oct. 24, which should help smooth out the sales comparison, but it probably won't be enough to bridge the early sales gap between the two titles.

The first Destiny was one of the most hyped video games of the last decade and, based on reviews and online feedback, a significant number of people who played the title wound up disappointed to some extent. Destiny 2 has gotten better reviews and seems to have addressed many of the criticisms directed at its predecessor, but there's a fair chance that many of the players who weren't satisfied by the series' debut entry will not be returning for the recently released follow-up or that strong word of mouth post-release will be necessary to get them back on board with the franchise.

So, at present, it seems likely that Destiny 2 will sell fewer units than its prequel. This also sets up a situation where there might be fewer users who are purchasing the game's expansion packs. Activision released four paid expansion packs for the original Destiny, and is pursuing a similar content strategy with the recently released sequel, so having a smaller installed base for the core package is likely to affect expansion sales.

It's not unusual for video game companies to frame the performance of their titles in an overly positive light close to release and then later admit that sales came in significantly below expectations. Activision's decision not to include a sales figure in its press release is notable given that the publisher proudly announced that the first Destiny achieved $500 million in first-day sales back in 2014. However, even in light of the big physical sales drop-off in the U.K, the content of the company's press release points to a strong performance for the game rather than PR subterfuge. 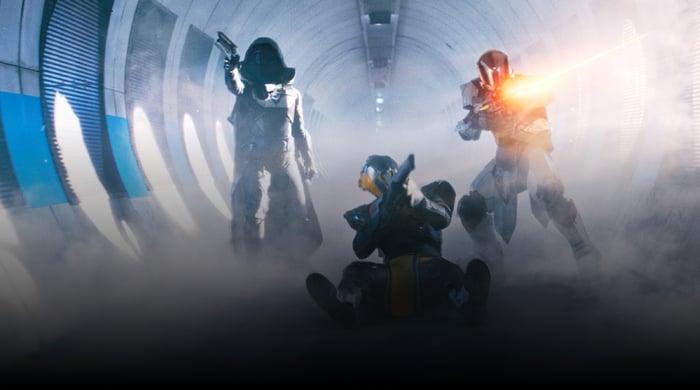 The company reports that Destiny 2 had the biggest console sales week of the year, which would mean that it unseated high-profile releases including Ubisoft's Ghost Recon: Wildlands and Madden NFL 18 from Electronic Arts. There's also digital distribution to consider. While physical sales might be down in a big way, digital sales have apparently increased substantially. Industrywide, roughly 5% of annual retail console video game sales shifted to digital channels in both 2014 and 2015 with that transition accelerating closer to 10% last year, and it looks as though Destiny 2 is seeing an especially large share of sales coming from digital channels. Activision reports that the title set a record for first-day digital sales on the PlayStation Store.

The press release also heralds the fact that the sequel surpassed the original in terms of engagement across the two titles' respective debuts -- recording at least a million concurrent players in each of the eight days following its release. That's especially encouraging because Destiny 2 introduces micro-transactions to the series, offering players the option to purchase in-game currency and aesthetic customizations for their characters and vehicles -- opening up a new high-margin revenue stream for the franchise. If engagement stays high, it's possible that Destiny 2 could go on to be more profitable than its prequel even if it winds up having a smaller player base.

With sales for Activision Blizzard properties including Call of Duty and Skylanders seemingly on a downward trend, Destiny 2's performance takes on added significance. Current indications suggest that the sequel will still be successful despite what looks to be a big decline for physical game sales, but as the second mainline entry in a franchise that the company has long-term plans for, investors should keep an eye out for updates on the title's performance to see if it lives up to the level of success the company has projected in its recent press release.