The popular photo and video sharing service continues to march toward 1 billion MAUs, which would be Facebook's fourth platform of such size. Beyond Facebook's core social network, the other two platforms that have exceeded 1 billion MAUs are messaging platforms (Messenger and WhatsApp), which are difficult to monetize in unobtrusive ways. Facebook is still trying to figure out the best way to build those businesses, but its core competencies in advertising -- a few recent gaffes notwithstanding -- translate very well to Instagram. 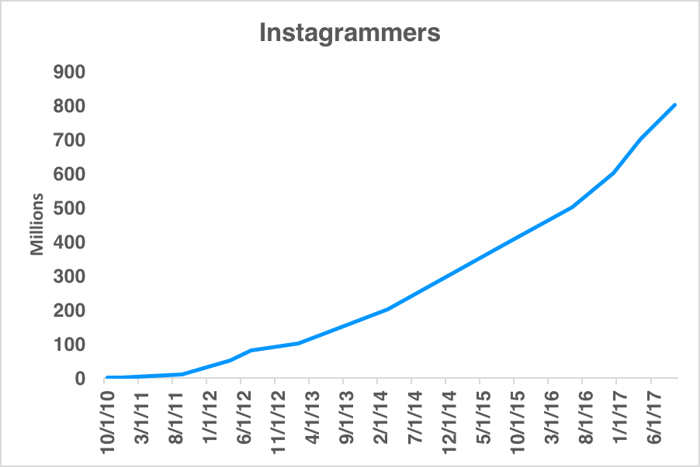 Perhaps more important for investors, the company also disclosed that there are now 2 million monthly advertisers on Instagram, double the 1 million advertisers that Instagram had in March. Remember, Instagram only started trying to monetize its service in earnest nearly three years ago, launching the first ad in November 2013. Most of its efforts since then had been focused on growing the user base, but Facebook is now cranking up the monetization.

Instagram notes that mobile video is a huge driver of user engagement, which just so happens to be a rather lucrative ad format. Time spent watching videos on the platform has soared 80%, while the number of videos being created daily is up fourfold. Live videos and Instagram Stories are driving video creation and consumption.

An overhang for Snap

Instagram is also Snap's (SNAP) biggest and fiercest competitor, a fact that has been a major overhang on Snap shares ever since going public earlier this year. Facebook is becoming a conglomerate of social media brands, but Instagram is the Snapchat operator's most direct rival, being photo- and video-centric. Snap finished the second quarter with 173 million DAUs, which was shy of expectations. In other words, Instagram's DAU base is now nearly three times as large. Snap does not disclose the number of advertisers or it has on its platform or the size of its MAU base.

CNBC reported last month that advertiser interest in Snap is waning, citing sources at ad agencies. Snap is behind in terms of measurement tools and interest among high-profile celebrities, and Snapchat is still confusing for most new users trying out the platform. As a result, advertisers are shifting their ad budgets and spending toward Instagram and other platforms.

Instagram has been adding 100 million MAUs every five to six months. At that rate, it could hit 1 billion MAUs in about a year, making 2012's $1 billion price tag well worth it.