A little while back, I argued that Apple (NASDAQ:AAPL) made the right decision to bet on Taiwan Semiconductor Manufacturing Company (NYSE:TSM) for the manufacture of its A10 Fusion and A11 Bionic chips, rather than on chip maker Intel (NASDAQ:INTC).

Despite Intel's continued protestations that it has a significant technology leadership position against the rest of the industry, the truth is that the production ramps of its latest technologies have proven, to say the least, highly problematic. 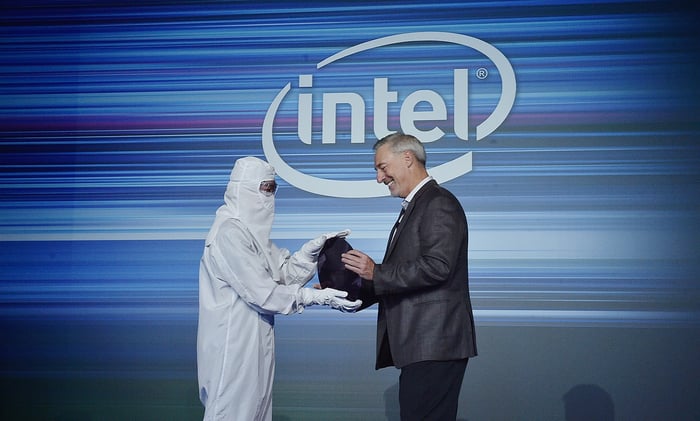 This is, perhaps, best illustrated by the continued delays in Intel's upcoming 10nm technology. In late 2013, Intel CEO Brian Krzanich told investors to expect 10nm to be production-ready by the end of 2015.

Intel recently said it will begin shipping its first 10nm products by the end of the year, with shipment volumes ramping up during the first half of 2018.

However, Intel still talks about its ambition to become a major player in the contract chip manufacturing market. Just a week ago, Intel hosted its Technology and Manufacturing Day in China during which it showed off a test chip with ARM Cortex A75 cores running "in excess of 3GHz."

This leads me to revisit the following question: Can Intel win at least a part of Apple's A-series processor manufacturing?

For Apple to risk moving away from a trusted supplier, there needs to be a significant benefit for Apple. Since Apple builds premium products that sell for premium prices (Apple's cheapest iPhone 8 sells for $699), I don't think Intel could win the business away by simply competing on price or offering a technology that results in a modest cost reduction for Apple.

The risk of going with a supplier with such a shoddy track record just to save a little bit of money per phone wouldn't be worth it. So, what Intel would need to offer Apple is the ability to build products that couldn't be built using technologies from the contract chip manufacturers.

The only way I see that happening is if Intel were to offer Apple manufacturing technology that could enable dramatically better performance-per-watt than competing offerings. Again, because of the risk that would be involved in going with Intel, a modest performance-per-watt gain of, say, 5% to 10% probably wouldn't be enough to even open discussions.

But if Intel could offer Apple a technology that could enable Apple to build chips that are, perhaps, a generation ahead of what it could build using alternative technologies, then I could see Apple considering a move to Intel. However, in addition to a suitably compelling technology in terms of performance/capabilities, Intel would need to demonstrate the ability to bring new technologies into volume production on schedule and at good yield rates.

Remember: Apple releases new iPhones on a strict annual cadence, so a supplier's ability to deliver product in high volumes on schedule is absolutely critical to the success of Apple's business. Even a delay in mass production by, say, a quarter could have a devastating impact on Apple's revenue and profits, which depend rather substantially on its iPhone business.

Maybe one day Apple might seriously consider having Intel mass produce the chips that power the former's iPhones and iPads, but that day, if it ever comes, would be somewhere very far in the future.