In one corner stands Wal-Mart Stores (NYSE:WMT), heavyweight champ of the U.S. retail industry with nearly $500 billion in annual sales. In the other corner is Target (NYSE:TGT) -- an underdog rival who may just be in store for an upset victory.

In this battle for investors' dollars, which of these retail titans will emerge victorious and be named the better buy today? 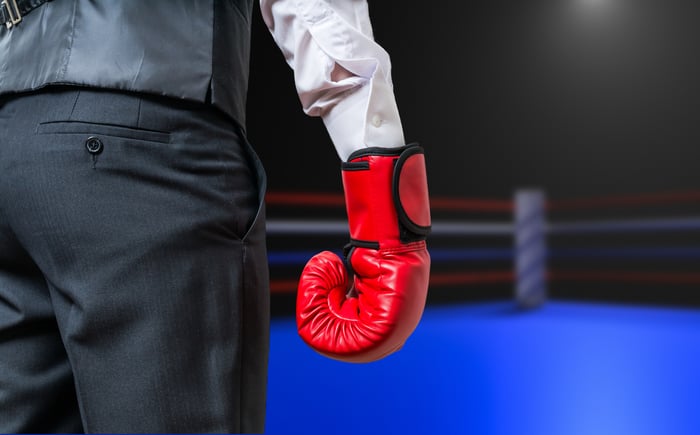 Analysts expect Wal-Mart's earnings per share to rise by nearly 6% annually over the next half-decade, fueled by the company's booming e-commerce business. During that same time, Target's EPS is projected to fall by more than 3% annually, as the retailer spends heavily to remodel its stores, revamp its supply chain, and strengthen its digital operations. Thus, Wal-Mart clearly has the edge in terms of expected growth.

As e-commerce continues to disrupt a large swath of the traditional retail industry, only the strongest retailers are likely to survive over the long term. Financial fortitude is therefore of the utmost importance. Let's take a look at how Wal-Mart and Target stack up in this regard.

While Wal-Mart is the more heavily indebted retailer, its interest and principal payments are covered many times over by its massive cash flows. And ultimately, it's a company's cash profits that allow it to reinvest in its business to spur growth, as well as reward shareholders with dividends and share buybacks.

Moreover, Wal-Mart's nearly half a trillion dollars in revenue is a staggering sum. This incredible scale gives it strong purchasing power; Wal-Mart is notorious for demanding price concessions from its suppliers. It then passes on much of these savings to its customers in the form of lower prices, making it the low-cost provider of an unmatched selection of goods among traditional retailers.

No better buy discussion should take place without a look at valuation. Let's check out some key value metrics for Wal-Mart and Target, including price-to-earnings, price-to-sales, and price-to-free-cash-flow ratios.

On all four metrics, Target's shares are considerably less expensive than Wal-Mart's. That's to be expected, as Target's stock has lost a quarter of its value over the past two years as the retailer has struggled with rising costs and declining margins. During that same time, Wal-Mart's shares gained nearly 25% as the retail titan's investments in its people, stores, and e-commerce strategy have begun to bear fruit. Still, at current prices, Target's shares are more attractively priced.

The winner by split-decision is...

In a closer-than-expected battle, the champ held on to the heavyweight title. Target put up a good fight on the valuation front, but Wal-Mart's extraordinary scale, financial fortitude, and exciting e-commerce growth opportunities ultimately overwhelmed everything its underdog rival brought into the ring. For investors seeking a solid retail stock, Wal-Mart is the better buy.