Please ensure Javascript is enabled for purposes of website accessibility
Log In Help Join The Motley Fool
Free Article Join Over 1 Million Premium Members And Get More In-Depth Stock Guidance and Research
By Keith Noonan - Oct 1, 2017 at 8:07AM

Nintendo (NTDOY 1.75%) is on the comeback trail, and its outlook is more promising than at any point in the last five years. The company is finding success by branching into new business segments, with its mobile and licensing businesses increasing 450% year over year to account for roughly 6% of revenue last quarter. That's a laudable contribution for a pair of relatively new ventures, but Nintendo's console video game hardware and software sales will remain the most important performance drivers for the foreseeable future.

Luckily for the Japanese gaming giant, its recently released Switch console is off to a great start. 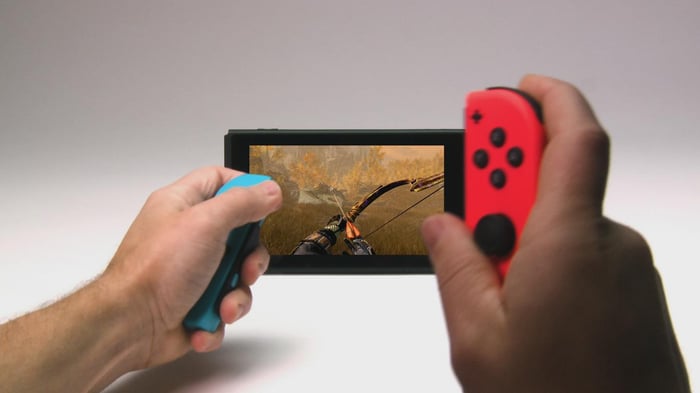 Following the Switch's launch in March, GameStop reported that the handheld-console hybrid delivered the best-ever launch for a Nintendo platform at its stores -- even better than the massively successful Wii, which had a fantastic debut and went on to sell over 100 million units. More recently, GameStop has indicated that it expects the system to sell out through the rest of the year, a clear sign of sustained demand.

A good launch doesn't guarantee a system will be a hit over the long-term, and some challenges remain for the Switch, but being supply constrained nine months after hitting shelves is actually a great sign. Making the outlook for hardware sales even more promising, Nintendo recently signed a deal with Tencent Holdings that could lead to the distribution of the Switch in China, a huge potential market for the system.

A lack of third-party software has been one of the biggest weaknesses for Nintendo's console platforms over the last two decades. After a dismal performance for third-party games on Nintendo's Wii U platform last generation, and disappointing sales even on the Wii's massive user base, publishers were clearly hesitant to put many resources into supporting the Switch prior to the platform's release.

Following its blockbuster debut, however, publishers are scrambling to get on board. Even more promising, they're not just concentrating on the type of family-friendly content that tends to perform well on Nintendo platforms. Games-publisher Bethesda has announced that it will bring Wolfenstein II and Doom to the Switch, Take-Two Interactive is bringing over L.A. Noire, and Square Enix is exploring a version of Final Fantasy XV. These are the types of games that have typically skipped Nintendo platforms in the past, so the fact that they're in the works suggests that the Switch is succeeding with gamers outside the company's usual core audience.

That's great news and points to the emergence of a virtuous cycle. A wider selection of games typically means more consoles will be sold, which, in turn, means there is a larger audience to sell games to, which should attract publishers to bring still more games to the platform. Like other console platform makers, Nintendo also gets licensing fees for the games that are sold for its systems. So, the emergence of the Switch as an attractive platform for third parties could have major benefits for the company.

The Switch audience is hungry for re-releases

Sales of Nintendo's first-party games for the Switch have been great so far, but the type of content that's been selling well is even more promising than the raw numbers. Legend of Zelda: Breath of the Wild is the latest sequel in the much-loved and long-running franchise, and currently the best-selling game on the Switch, but it almost certainly won't be the most profitable of the current batch. That honor will go to Mario Kart 8 Deluxe -- an updated version of a game that first launched on the Wii U platform in 2014.

Developing video games from the ground up is cost-intensive and risky; bringing an existing title to a new platform tends to be relatively inexpensive. In a similar vein, the company's Splatoon 2 reuses much of the content and assets from the 2015 original, and its strong sales so far suggest it will be another highly profitable release for Nintendo. The appeal of console-quality games on a portable platform gives Nintendo the opportunity to repackage older games. And given that the Japanese giant has the deepest back-catalog of video games in the industry, it's likely just scratching the surface of this opportunity for the Switch.