Thinking about investing in GameStop? Get caught up on the most important points from the company's Aug. 24 earnings call.

GameStop (GME -8.71%) stock has been hammered in 2017, trading down roughly 25% year to date and 13% since the company's Aug. 24 second-quarter earnings release. The core issue facing the video-game retailer is that an increasing share of video-game sales will continue to migrate to digital channels in the coming years -- cutting into the new and used software categories that have historically accounted for the greatest share of the company's sales and profits. To combat this trend, the company is in the midst of a diversification effort, and that means investors should keep a close eye on the retailer's operations.

Read on for a look at five of the most important takeaways from GameStop's most recent earnings call, with quotes coming from a transcript from Thomson Reuters. 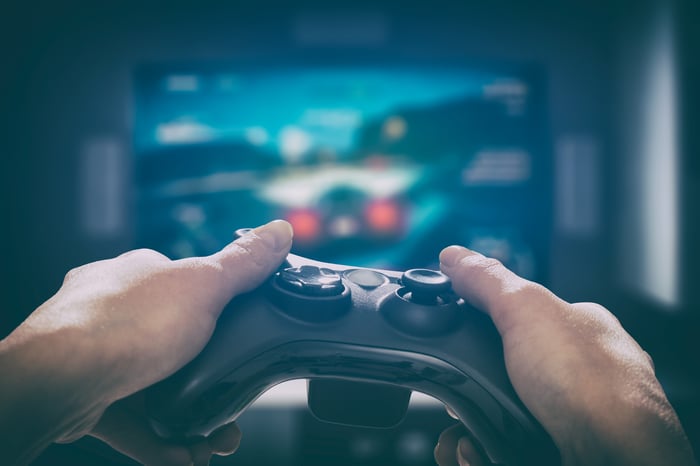 Nintendo (NTDOY -0.48%) released its Switch platform, which combines elements of handheld and home consoles, in March, and the system is off to a very strong start. That's great news for GameStop, which needs as many business drivers for its gaming businesses as it can get. Here's CEO Paul Raines touting the strong performance of Nintendo's latest console:

On the physical gaming front, the Switch has been a massive success, leading to our hardware growth of 14.8% for the quarter. ... [I]t has been our most successful Nintendo launch ever. Attach rates have been consistently high and are at over 5:1 since launch, and we expect healthy allocations in the back half of the year.

Beyond simply adding another viable hardware and software platform for GameStop to sell, Switch is especially important for the retailer because the system's small amount of onboard storage makes it likely that physical sales will comprise a greater percentage of overall sales compared with PlayStation and Xbox platforms.

The company's membership program is strong

GameStop's video-game retail outlets offer a tiered membership program that provides benefits ranging from promotional discounts to added value given for trade-ins and has been instrumental in driving customer engagement. Getting more customers on the membership rolls looks to be a key part of keeping its game stores healthy and spurring collectibles sales. Here's Raines on the importance of the company's PowerUp membership program:

As you've heard on prior calls, our PowerUp program has been an intense focus since this time last year. I am pleased to report that our paid level, which we call PowerUp Pro, is up by 1.5 million members in the last 12 months in the United States, each paying $15 per year to receive the benefits of membership. As you know, our PowerUp Rewards program, with over 50 million members worldwide, provides significant value to our most loyal customers and is a key to our success in driving pre-owned business, omnichannel businesses, and growth in collectibles, as its members represent over 70% of our sales volume. So we know it's working.

The company's PowerUp Rewards Pro members spend three times more than regular members and account for 70% of collectibles sales, and boosting customer engagement should provide some insulation from the broader digital sales transition. Same-store traffic is trending down, falling 8.9% year over year last quarter, so generating more sales per visit will be necessary to stave off steep revenue declines at GameStop locations. The outlook for collectibles is promising

GameStop is looking to its collectibles segment, which includes pop-culture merchandise sold at its namesake and ThinkGeek locations, to drive future growth. The idea that this could be a bigger market for the company than video games might be surprising, but GameStop believes that's the case. Here, Chief Operating Officer Tony Bartel comments on the recent performance and outlook for the segment:

Turning to collectibles, we had a very strong quarter, as we grew 36%. We continue to expand linear footage in our GameStop branded stores, and we'll continue to evaluate the linear footage in our stores to maximize traffic and profitability. We believe that the overall collectibles market will surpass the video-game market as soon as next year. We added five dedicated collectibles stores during the quarter, bringing our global dedicated store count to 99 stores. Half of our loyalty customers purchase collectibles, and they spend more money annually on collectibles than they do on video games. We are on track to achieve both our annual collectibles goal and our strategic revenue goal of $1 billion by 2019.

Collectibles sales reached $122.5 million last quarter, comprising roughly 7% of overall sales. The category's 35% gross margin in the quarter arrived below the 42% margin generated by the company's used games and accessories sales but came in above the 22% margin on new software. In the current quarter, the company expects that the segment's sales will grow between 30% and 40% from $109 million in last year's third quarter.

Aside from collectibles, GameStop's tech brands segment is the other core pillar of its diversification effort. Tech brands, which includes stores that sell mobile hardware and AT&T (T -0.16%) and DIRECTV service packages, delivered a 7% year-over-year sales increase in the second quarter -- a significant slowdown from the 21.5% year-over-year growth the division posted in the first quarter, which GameStop attributed to lower wireless upgrade commissions and a slower-than-expected upgrade cycle for mobile hardware. On the upside, the company expects that the Samsung Galaxy Note 8 and the upcoming Apple iPhone 8 launch will reverse lagging mobile sales and anticipates improved results from its AT&T stores. Here's Bartel on the outlook at its AT&T-partnered stores:

Starting in August, we will begin to comp the 425 stores that we acquired last year. And based on the 15% increase in productivity that we are seeing in these stores, we expect that to help drive both traffic and gross profit comps going forward. AT&T has remained steadfast in its focus on sales of entertainment and business solutions. At the beginning of the year, we launched business centers in all of our AT&T branded retail stores. These business centers, combined with the growth of an outside business sales team, has created the largest business footprint for AT&T in its retail distribution channels.

Sales of entertainment packages, consisting mostly of DIRECTV subscriptions, were up 238% over the prior-year period, and Raines noted that the company will continue to train its staff with the hope of boosting sales in the category.

In another move to reduce its dependence on retail video-game sales, GameStop has moved into the game-publishing space. The company acquired game maker and social-platform operator Kongregate in 2010 for $38.1 million, but it announced in June that it would be selling the unit for $55 million. In the recent earnings call, management emphasized that the sale was not related to the unit's performance and, instead, came down to differing visions for the platform's future -- with Kongregate looking for a bigger investment in expansion than GameStop was willing to provide. Chief Financial Officer Robert Lloyd provides some details on the sale:

We sold our Kongregate division, with the transaction closing in mid-July. Kongregate was seeking funding to publish games at a greater level than we were willing to invest, given historical profitability and return levels. With recent successes like Animation Throwdown, we capitalized on the opportunity to sell it now. The sale resulted in a gain of $7.3 million, also $7.3 million net of tax, or $0.07 per share.

Llloyd later commented that Kongregate had accounted for less than 5% of the company's digital sales and said that selling the division to Swedish entertainment company Modern Times Group had created a relationship that would open up opportunities in esports and marketing down the line.